I made this chart.   Several other blogs have copied it nearly verbatim, and I am happy that others want to spread actionable information to protect people (would have been nice to get a proper credit though).   I had the chart translated to Japanese as I was sending a Geiger to Japan to help families address their real risk.   See bottom for the Japanese version.

This is a super condensed table on how to interpret Geiger Readings.   Use it to supplement your own research and getting a "block of knowledge".

If you take this radiation stuff at all seriously, then get a Geiger.   All the rest is guesswork. 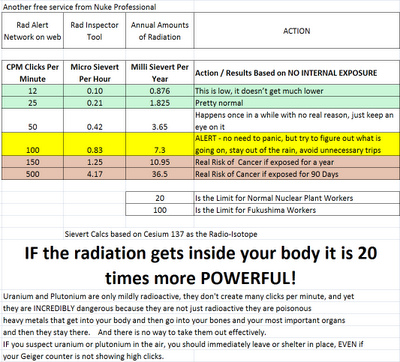 Sometimes, Radiation reporting websites will express radiation readings (based on assumption of Cesium) as microREM/Hour.    AS an example, if they are stating 11 microREM/H you divide by 100 to get .11mSv.


This table is based on the Radiation Alert Inspector which is a fine pancake tube type device.    The Clicks that any device produces are based on its own "efficiency" in detecting various types of the alpha, beta, or gamma.    These can then be converted to a mSv making a huge assumption, i.e. the isotope.    Usually Cs is chosen for this guess.  But you don't really know the mSv until you know the isotopes involved.

If you have a cheaper, small tube type Geiger, you are going to pick up less Clicks.


And Here are LIVE radiation reports from independent reporting stations.

I am sending my Radiation Alert Inspector to Japan to a family that needs real data---soooo You won't see an Oahu based reporting station until I get my next Geiger delivered. 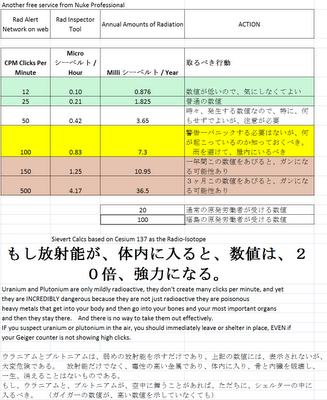 AnonymousOctober 2, 2015 at 2:10 PM
Hi Stock. Are you able to explain the discrepancy between Bob Nichol's Your Radiation This Week and http://radiationnetwork.com/ above?
ReplyDelete

- See more at: http://nukeprofessional.blogspot.com/2012/04/geiger-counter-interpretation.html#sthash.nIbzHJX8.dpuf
Hi Stock. Are you able to explain the discrepancy between Bob Nichol's Your Radiation This Week and http://radiationnetwork.com/ above? - See more at: http://nukeprofessional.blogspot.com/2012/04/geiger-counter-interpretation.html?showComment=1443820247655#c7297177129227982770

Can you explain the difference between the Veterans today report and http://radiationnetwork.com/ above

stock here: Simple: He is using the EPA reports that include very sensitive gamma radiation reading (in 8 different energy ranges incidentally), compared to radnet which is comprised of VARIOUS Geiger counters, that are catching some Alpha, but mostly beta and gamma and they are not as sensitive.

So a CPM means little unless you the type of Geiger that took it.

Seeing 50CPM on a nice Radiation Inspector Alert would not be a "take action level" but if you have an el cheapo $160 Geiger, and you are seeing 50CPM it may very well be a "figure out what the hell is going on" moment.