PRO
“Got some pictures of that reinforced in completed state?

What seismic is that rated for?

Like that reactor 1 cover....they built it for 65 MPH rated wind load, when Japan gets typhoons all the time.....hmmmm 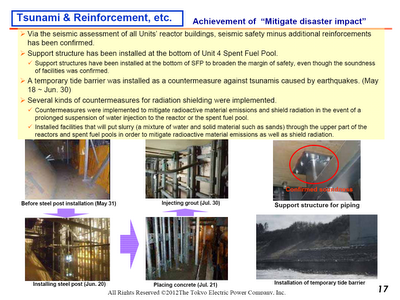 Another "safe" calculation. Hopefully nothing beyond design basis happens......same old lies of nuke.

So look below, little stilt support structures, whatever happened to 30" I-Beams, eh?

It looks half assed. Sure they ran some engineering calcs, and sure they made some assumptions about a quick deployment versus a long term fix. The fate of humanity, you and me and your little dog too rests on those steel poles, on a broken conglomeration of first generation nuke plants, run by a zombie company living on handouts, on the ring of fire. I expect a better fix than that. 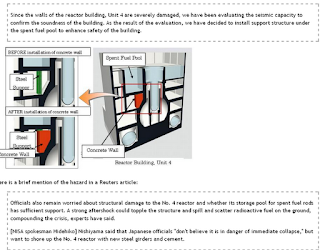