Rising Gold along with falling US equities and a rising dollar -- and this is what we have seen.   The trademarked "Fear Factor" indicator measures this.

It seems like the charts "create" the news.   Well at least predict the news, as if the insiders know more than main stream media.

Today we have a "Super Moon"

Many people are not aware that Fukushima is more dangerous and potentially deadly than ever.   Besides the continuous release of radioactive water that flows by melted rods they are trying to keep cool, there is also the Reactor 4 Fuel Pool.   If that collapses, nuclear experts state the radiation released would be like 800 large nuclear bombs going off all at once, in an open air reaction that would pretty much toast Japan quickly and it would also get carried across the Pacific and blast the US within days.   It may not be an extinction level event, but it would be close, it would at least be a Mad Max level event.


Experts say acknowledging the threat would call into question the safety of dozens of identically designed nuclear power plants in the U.S.

The moon itself is the largest variable force on the earth, except for perhaps large magnetic and perhaps other physics effect of Coronal Mass Ejections CME from the Sun.

If you Google Earthquake and Supermoon,  you  get nearly 100% people aggressively "debunking" any relation.   Funny how that works.    They go out of their way to "prove" that nature is not in control, that humans are in control.   And in their rants, I see no hint of real scientific data.   And they cite "I have never seen scientific data showing a correlation between moon and earthquakes" as a way to "prove" no correlation.

Indeed, perhaps the insane Monkeys became human, and maybe a certain degree of insanity is in fact an serious evolutionary advantage.    Perhaps the insanity drives innovation and ability to wage war to pump the ego further in the insane inflation of our own self importance.   Ah yes, the ability to fool your own mind, funny but that could actually be an evolutionary advantage, the psychopaths rise to the top.

Keep in mind too that proceeding a "Super Moon" is a "Super No Moon" because of the shape of the orbit.    The earth reacts to not just an increase in gravity and tidal effect, but also to a decrease in gravity.     And the tidal effects lag behind a few days since water has mass and inertia. 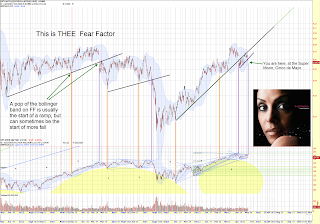