Here in the Pacific Ocean, we didn't obtain a Geiger until 2012.

Radiation is now spiking up much more than ever before

There were huge waitlists, and doing the research on a proper Geiger was a bit challenging.

Early and midyear we noted very consistent radiation readings that could only be considered "background" at around 12,500 Clicks per 8 Hour Period.    Running the 8 hour test is a good way to do it, rather than just instantaneous observations of the current data, it takes out the peaks and valleys and gives a better overall report. 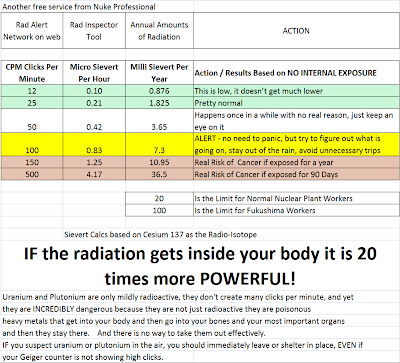 Surprisingly, I got my first reading of 19,400 Clicks in 8 Hours

Other places on mainland USA are far worse, and some of those are just lately.

But this leads credence to the view that something big happened, and most likely at Fukushima, coincident with the last "no moon" which oftens brings on earthquakes.

HEPA filters
Anti-oxidants
Stay out of the rain

Basic and simple protections, besides working to rid the planet of nukes, that is all we can do for now.