If you think this email is relevant, pass it on.

Kewaunee is up by Green Bay
It is the first of 104 plants in the US to close down.   Congratulations to Wisconsin, leading the Pack!

The big problem with these plants is not that 1% of them blow up, but the long lasting problem of the spent fuel.   The used fuel turns into all sorts of nastiness, including plutonium which is one of the worst things man could ever conjure up.

At Kewaunee, they plan on storing ALL the spent fuel the plant has ever produced, 500 yards away from Lake Michigan, for 60 to 120 years.    It has to be carefully stored, cooled and separated, or it can re-erupt in a nuclear fire that would disperse all of the nastiness.    Think a monster tornado or a terrorist attack as simple as a backpack full of plastic explosives.    They say they will have security “for forever”, however just this year a 82 year old nun sneaked  into a nuke storage site and stayed there for a day undetected.    So much for security.

Or if that spent fuel got into the Lake….that would be the end of Lake Michigan and all the cities on the lake.  Not likely, but still, accepting this kind of danger is pretty close to insanity.

A million pounds of nuclear waste stored right on the edge of Lake Michigan.   How insane is that? 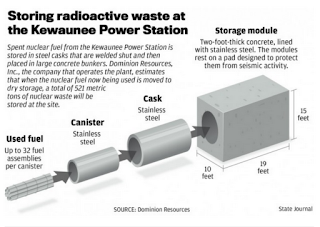