I first noticed the magnetic pole shift around 2006, being a pilot and a solar engineer I often took measurements, and for a while nothing was lining up the way it used to, so I tried a few different compasses.   I thought it strange, and I thought it stranger that no one was talking about it.

I wouldn't say this was the "kick off" to my impression that things were getting wacky in the world.   Maybe the first was the doubling of property values in less than 2 years that let me get out from an underwater property to a nice profit.

But lets put it this way....the "experts" are often just making stuff up, to get their grant money and help their universities get federal funding.

NASA is downplaying magnetic shift saying "it happens all the time", as are  other parrots of the "don't panic the sheep" cartel.   These things are suspicious.   The experts can all justify their actions by rationalizing that avoiding panic is better than dealing with what is going to happen anyway.

Classic writing say that a north south magnetic pole shift happens every 320,000 years or so with wide variations, and that the last one was 700,000 years ago. 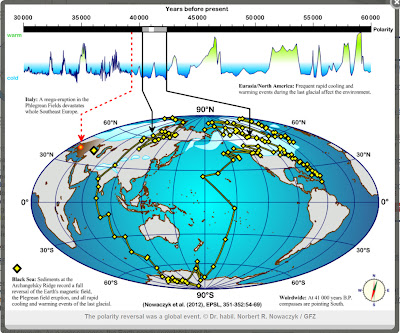 However, some pretty credible data cross correlated from the Black Sea, the Laschamp event in the Massif Central, and Greenland data, and shows a "rapid" 250 year complete pole shift, around 41,000 years ago, followed by a european super volcano around 39,500 years ago.

And let me throw this in....what about that really cool rise of Cro-Magnon man and epic cave paintings around 35,000 to 39,000?     Indeed, magnetic pole shift appears to occurs with a lessening of overall magnetic field, which allows more cosmic radiation in to the home planet, which allows for more DNA damage and the occasionally successful mutation that works better.    Saber toothed tigers probably kept the cancer rates in check pretty well.

We are in a period of very fast movement of the magnetic pole, and it appears the north pole has the itchy feet and the south pole is more stable.

But nothing to worry about....NASA says the pole flips "all the time", and other experts state that there is no evidence that a pole flip was harmful in the past (maybe check the IPhone data records), and that most people wouldn't even notice a pole flip.    Yeah, very reassuring, why don't you guy at least focus on detecting these 153,000 asteroids like the one that hit the earth in April 2012.    An amateur astronomer found it just days before it hit.


Another near miss
Posted by Stock at 2:32 PM