The old "Sleeping next to someone lie"

It is easy to expose the lies of nukers with just a little background.

That would be *365, or 730mrem per year, or about 7.3 mSv per year.
The conversion is about 100 mren per mSv, as can be seen on my handy conversion page
http://nukeprofessional.blogspot.com/p/conversions-and-safety-limits.html

What an absurd claim, as that is way higher than the average annual dose from all sources, including man made for the average person.

But it is true that your own body gives you a .3mSv dose annually from the Potassium.

In sketch SK-1 below we see that the radiation leaving the body and not absorbed by the body is only about 17% of the total.

And in SK-2 we see that on the average Queen Size bed geometry that the transmitted dose to Body 2 is at most 6.9% of the leaving radiation from Body 1.

7.3 mSv as promoted by a nuclear promoter.

So we have proven that nuclear promoters lie by over 6000 times the real value.      LOL, I hear the TEPCO is looking for some "Data Communicators", the job lasts a long time!

0.001167 mSv is really negligible in the overall scheme of things, you can get off the couch and go back to the bed and rest easy.   LOL.    And go Troll Jousting, when you hear the lies of Nuke, just point them to a link at the Nuke Pro. 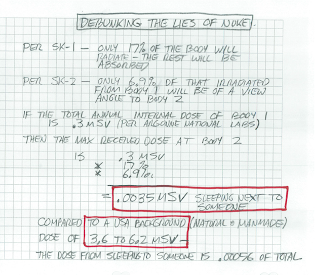 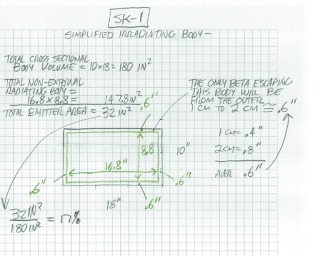 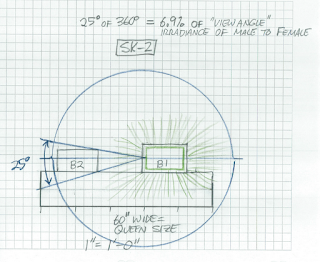 Here is some more reason not to worry about your own internal radiation, and TO WORRY about the external radiation sources that the medical and nuclear cartel are willing to expose you to.

The neat thing about potassium is that is spreads evenly through the body, only about 1 in 10,000 is the radioactive type, and it takes 1.3 billion year for HALF of them to "go off".    What this means is that even though it is well spread throughout the body, each particular "go off" aka an ionization hits one isolated cell structure if any at all.    The body has developed over a huge long time to be ability fix much of this "one shot" internal radiation.   It has to do with repairing strand breaks caused by the ionization.   The body is pretty good at repairing a single strand break and nothing much too weird happens.

Now consider the effects of a Mixed Martial Arts fighter doing damage to the same victim at close range and repeatedly.....enter the "Hot particle"

Now when a "hot particle" get into the lungs or guts (think cesium and strontium) they can pack a much more powerful punch, and when they lodge or become part of the body structure, they can continually damage the same cellular structures, causing double strand breaks.   The body tries to repair them.   Now consider a double double strand break that get repaired incorrectly.    Horrors.

Also the NRC published a pie chart in their article here, which I debunk --- they start lying right out of the gate, right at the baseline their pile their lies high.