This one came from Capt D, who is doing top notch work on shutting down San Onofre.

Capt D is quoting alot of information from Testosterone Pit, which is linked here also, just below.

And here is the French Paper report, using the Google tranlator which works pretty OK

The French have 58 nuclear plants, and a single one of them could wipe out 3 years of GDP.  That would kill their country, and much of Europe as a domino effect.   See the chart below, France likes to group their highest devices all together similar to Fukushima to achieve "lower operating cost".    So usually they group 4 plants together, it one blows up it would affect the ability to prevent the others from blowing up. 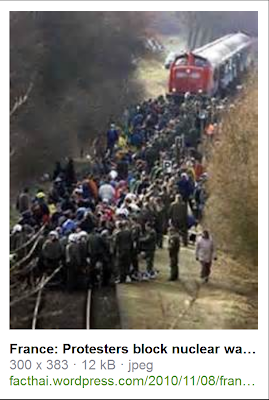 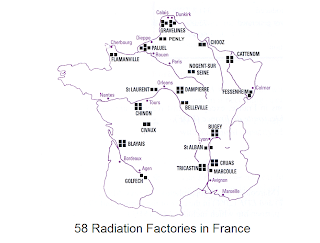 Look at these numbers and remember the USA cannot afford a Trillion Dollar Eco-Disaster like Fukushima either!

Catastrophic nuclear accidents, like Chernobyl in 1986 or Fukushima No. 1 in 2011, are, we’re incessantly told, very rare, and their probability of occurring infinitesimal.

But when they do occur, they get costly. So costly that the French government, when it came up with cost estimates for an accident in France, kept them secret.

But now the report was leaked to the French magazine, Le Journal de Dimanche. Turns out, the upper end of the cost spectrum of an accident at the nuclear power plant at Dampierre, in the Department of Loiret in north-central France, amounted to over three times the country’s GDP.

Hence, the need to keep it secret.

The study was done in 2007 by the Institute for Radiological Protection and Nuclear Safety (IRSN), a government agency under joint authority of the Ministry of Defense and the Ministry of Environment, Industry, Research, and Health.With over 1,700 employees, it’s France’s “public service expert in nuclear and radiation risks.” This isn’t some overambitious, publicity-hungry think tank.


It evaluated a range of disaster scenarios that might occur at the Dampierre plant. In the best-case scenario, costs came to €760 billion—more than a third of France’s GDP. At the other end of the spectrum: €5.8 trillion! Over three times France’s GDP. A devastating amount. So large that France could not possibly deal with it.

Yet, France gets 75% of its electricity from nuclear power. The entire nuclear sector is controlled by the state, which also owns 85% of EDF, the mega-utility that operates France’s 58 active nuclear reactors spread over 20 plants. So, three weeks ago, the Institute released a more politically correct report for public consumption. It pegged the cost of an accident at €430 billion.
Posted by Stock at 5:49 PM