Large Mass of Possibly Radioactive Flotsam Spotted in Hawaii, aka We Killed the Pacific

Read the article below.   They have found massive amounts of debris like this in Hawaiian waters, stretching in lines for miles.  From the Kauai Newspaper Article--"the line was between 10 and 20 yards wide, up to two miles long" 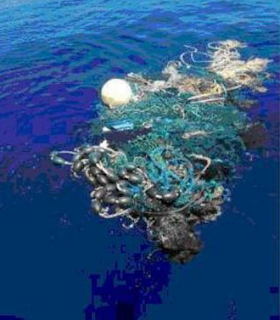 What is AMAZING is that no one has even put forth the idea of testing the debris for radiation, it is very possibly radioactive.   And reading below, even more amazing that Coast Guard, the DLNR (natural resources), the Whale Foundation.....absolutely everyone has taken a "not my job" approach.

The fast moving stuff, floating high above the water was coming as early as 2012, the "high floaters" had a big windage area and was blown quickly by the wind.    The new debris, a far larger mass than then high floaters, nets and such, don't get blown by the wind, they move with the water itself.

It has also clearly been shown by boats that have taken radiation samples at different depths at multiple places off the US West Coast, that 95% of the radiation stays in the top 200 feet of the water column. That fact is VERY important. The "experts" have been stating that even though it will be bad, it won't be that bad because the radiation will dilute throughout the entire Pacific. The whole depth of the Pacific.

NOW we find empirical data that shows that "dilution" is not true. Almost all the radiation stays in the main biosphere, the top 200 feet of water, EVEN after getting blown and drifted across thousands of miles. So the bioaccumulation effect is HUGE, and dilution is found to be a BIG LIE. Perhaps some of these experts don't even know they are lying.    Let me say that again....95% of the radiation stays in the zone that 95% of the life is.


But Hawaii would "need to" cover up any radiation, 90% of ALL their GDP comes from tourists.   If the tourists stop coming, Hawaii will implode.    They did the coverup when local milk was testing positive for Strontium.    They were trying to cover up again in September.......in an article titled....


“This is a bad disaster,” said Henrieta Dulaiova, an assistant professor in UH’s Department of Geology and Geophysics.    “By now, the plume is so diffused that even if it makes it here, it will be really low levels,” ...


Hh, huh, how about testing the ocean plume that was just spotted?

University of Hawaii did a pretty good job of predicting the Fuku Plume hitting the islands, they right chart is 2.5 years laters, which is now, and shows Hawaii being surrounded.

HOWEVER this is the takeaway.    Everyone who did modeling of the expected radiation plume, did their models based upon a one time, point source of radiation from the week of the initial meltdowns, and explosions.    Those who followed Fuku closely have always assumed that radiation releases were never in "cold shutdown" as Abe lied through his teeth about.    And that "conspiracy theory" about continuous radiation has now been confirmed by TEPCO admission to be true.

So the takeaway --everyone's models could be understated by 130 times, since the releases have occurred for 130 weeks, not just 1 week.     And the releases continue daily.    But Abe tells us that the radiation all stays in the harbor, yeah the open harbor.    And Abe states "let me reassure you, there will be no effect on the Olympics from the radiation".

“This is a significant entanglement hazard to marine mammals and all are encouraged to report any future sightings.”

And then then exclaimed they weren't going to do anything about it.

Rowley added that PMRF did not have the capability to conduct a search at that time, and that the Navy and Coast Guard are not permitted to directly support such activity.

Jean Souza, Kauai programs coordinator of the NOAA Hawaiian Islands Humpback Whale National Marine Sanctuary stated “A couple of agencies that we called could not go out”

Sheesh, so no one in the government is going to do anything, no recovery, no testing for radiation.    Why the heck are we paying these people's salaries~!

Capt. Mike Birchett said he was about one mile off the coast of Kalalau Beach when he spotted a large buoy — not uncommon by itself. However, the buoy proved to be just the beginning of what he described as a massive amount of marine debris.

The ribbon-like debris line was between 10 and 20 yards wide, up to two miles long and contained everything from car-sized bundles of commercial fishing nets to buoys, entangled ropes, large plastic fuel cans and buckets, according to Birchett.
Finding trash out on the water is no unusual thing. But Friday’s incident was different.
“It just kept going and going,” he said of the rubbish. “The most amount of trash I’ve ever seen. And it was just so odd that it was in this straight line.”
While he couldn’t be certain, Birchett estimated the debris, if combined, would likely weigh two tons.
After cruising alongside it for half an hour, Birchett reported the mess, which appeared to be heading toward Niihau, to the National Oceanic and Atmospheric Administration on Oahu.

How bad is the situation? Recently released data from Hawaii’s Department of Aquatic Resources indicates that the overall number of reef fish off the coast of Puako has fallen by between 43 percent and 69 percent

The Big Island had some of the best reefs and fish populations.

Huh, do you think all the pelting with uranium, plutonium, cesium from airborne sources, and now direct impact from the moving water mass, well do you think that could account for part of it? 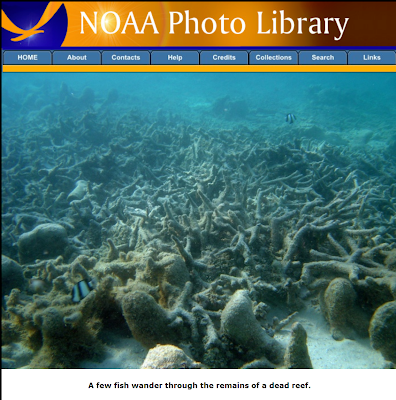 And speaking of "nuclear safety" this report regarding the  tragedy of atomic testing in the Pacific.

‘We’re going to just wait for these people to die’ 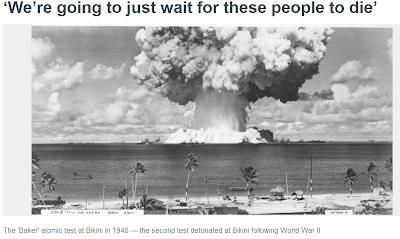 From day one, the U.S. government covered up the actual fallout impact not only of the Bravo shot but of all six of the large bombs tested at Bikini in 1954. The cover up went like this:
• The massive dose of radioactive fallout delivered to Rongelap Islanders, and to a lesser extent to those living on Utrik was the result of an ‘unexpected wind shift.’
• At 15 megatons, Bravo was two-to-three times greater than the anticipated power of the explosion. The power of Bravo, as shown in recently declassified documents, was known in advance.
• Only Rongelap and Utrik were exposed to Bravo (or any other) test fallout.
All of these statements have been proven false by the release of formerly ‘secret’ and ‘classified’ U.S. government documents. Most significantly is the fact that 18 other inhabited atolls or single islands around the country were contaminated by a minimum of three and most by all six of the bombs tested in Operation Castle, which included Bravo, in 1954.
But the myth of only four ‘exposed’ atolls (Bikini, Enewetak, Rongelap and Utrik) has shaped U.S. nuclear policy toward the Marshall Islands since 1954, limiting medical and scientific follow up, and compensation programs.
Posted by Stock at 6:48 PM