I did not write the below, I have copied it for record keeping purposes.   It is a great summary.   There are so many "signs".   The goal is to sway those who are on the fence, and to get people to protect themselves, AND to mobilize to shut down the EVIL nuke industry.

Here is the source.
http://www.globalresearch.ca/28-signs-that-the-west-coast-is-being-absolutely-fried-with-nuclear-radiation-from-fukushima/5355280

The map below comes from the Nuclear Emergency Tracking Center.  It shows that radiation levels at radiation monitoring stations all over the country are elevated.  As you will notice, this is particularly true along the west coast of the United States.  Every single day, 300 tons of radioactive water from Fukushima enters the Pacific Ocean.  That means that the total amouont of radioactive material released from Fukushima is constantly increasing, and it is steadily building up in our food chain.
Ultimately, all of this nuclear radiation will outlive all of us by a very wide margin.  They are saying that it could take up to 40 years to clean up the Fukushima disaster, and meanwhile countless innocent people will develop cancer and other health problems as a result of exposure to high levels of nuclear radiation.  We are talking about a nuclear disaster that is absolutely unprecedented, and it is constantly getting worse.  The following are 28 signs that the west coast of North America is being absolutely fried with nuclear radiation from Fukushima… 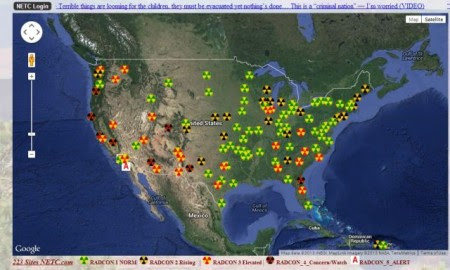 1. Polar bears, seals and walruses along the Alaska coastline are suffering from fur loss and open sores…


Wildlife experts are studying whether fur loss and open sores detected in nine polar bears in recent weeks is widespread and related to similar incidents among seals and walruses.
The bears were among 33 spotted near Barrow, Alaska, during routine survey work along the Arctic coastline. Tests showed they had “alopecia, or loss of fur, and other skin lesions,” the U.S. Geological Survey said in a statement.

2. There is an epidemic of sea lion deaths along the California coastline…


At island rookeries off the Southern California coast, 45 percent of the pups born in June have died, said Sharon Melin, a wildlife biologist for the National Marine Fisheries Service based in Seattle. Normally, less than one-third of the pups would die.   It’s gotten so bad in the past two weeks that the National Oceanic and Atmospheric Administration declared an “unusual mortality event.”

3. Along the Pacific coast of Canada and the Alaska coastline, the population of sockeye salmon is at a historic low.  Many are blaming Fukushima.
4. Something is causing fish all along the west coast of Canada to bleed from their gills, bellies and eyeballs.
5. A vast field of radioactive debris from Fukushima that is approximately the size of California has crossed the Pacific Ocean and is starting to collide with the west coast.
6. It is being projected that the radioactivity of coastal waters off the U.S. west coast could double over the next five to six years.
7. Experts have found very high levels of cesium-137 in plankton living in the waters of the Pacific Ocean between Hawaii and the west coast.
8. One test in California found that 15 out of 15 bluefin tuna were contaminated with radiation from Fukushima.
9. Back in 2012, the Vancouver Sun reported that cesium-137 was being found in a very high percentage of the fish that Japan was selling to Canada…
• 73 percent of mackerel tested
• 91 percent of the halibut
• 92 percent of the sardines
• 93 percent of the tuna and eel
• 94 percent of the cod and anchovies
• 100 percent of the carp, seaweed, shark and monkfish
10. Canadian authorities are finding extremely high levels of nuclear radiation in certain fish samples…


Some fish samples tested to date have had very high levels of radiation: one sea bass sample collected in July, for example, had 1,000 becquerels per kilogram of cesium.

11. Some experts believe that we could see very high levels of cancer along the west coast just from people eating contaminated fish…


“Look at what’s going on now: They’re dumping huge amounts of radioactivity into the ocean — no one expected that in 2011,” Daniel Hirsch, a nuclear policy lecturer at the University of California-Santa Cruz, told Global Security Newswire. “We could have large numbers of cancer from ingestion of fish.”

12. BBC News recently reported that radiation levels around Fukushima are “18 times higher” than previously believed.
13. An EU-funded study concluded that Fukushima released up to 210 quadrillion becquerels of cesium-137 into the atmosphere.
14. Atmospheric radiation from Fukushima reached the west coast of the United States within a few days back in 2011.
15. At this point, 300 tons of contaminated water is pouring into the Pacific Ocean from Fukushima every single day.
16. A senior researcher of marine chemistry at the Japan Meteorological Agency’s Meteorological Research Institute says that “30 billion becquerels of radioactive cesium and 30 billion becquerels of radioactive strontium” are being released into the Pacific Ocean from Fukushima every single day.
17. According to Tepco, a total of somewhere between 20 trillion and 40 trillion becquerels of radioactive tritium have gotten into the Pacific Ocean since the Fukushima disaster first began.
18. According to a professor at Tokyo University, 3 gigabecquerels of cesium-137 are flowing into the port at Fukushima Daiichi every single day.
19. It has been estimated that up to 100 times as much nuclear radiation has been released into the ocean from Fukushima than was released during the entire Chernobyl disaster.
20. One recent study concluded that a very large plume of cesium-137 from the Fukushima disaster will start flowing into U.S. coastal waters early next year…


Ocean simulations showed that the plume of radioactive cesium-137 released by the Fukushima disaster in 2011 could begin flowing into U.S. coastal waters starting in early 2014 and peak in 2016.


“Your days of eating Pacific Ocean fish are over.”

24. The Iodine-131, Cesium-137 and Strontium-90 that are constantly coming from Fukushima are going to affect the health of those living the the northern hemisphere for a very, very long time.  Just consider what Harvey Wasserman had to say about this…


Iodine-131, for example, can be ingested into the thyroid, where it emits beta particles (electrons) that damage tissue. A plague of damaged thyroids has already been reported among as many as 40 percent of the children in the Fukushima area. That percentage can only go higher. In developing youngsters, it can stunt both physical and mental growth. Among adults it causes a very wide range of ancillary ailments, including cancer.
Cesium-137 from Fukushima has been found in fish caught as far away as California. It spreads throughout the body, but tends to accumulate in the muscles.
Strontium-90’s half-life is around 29 years. It mimics calcium and goes to our bones.

25. According to a recent Planet Infowars report, the California coastline is being transformed into “a dead zone”…


The California coastline is becoming like a dead zone.
If you haven’t been to a California beach lately, you probably don’t know that the rocks are unnaturally CLEAN – there’s hardly any kelp, barnacles, sea urchins, etc. anymore and the tide pools are similarly eerily devoid of crabs, snails and other scurrying signs of life… and especially as compared to 10 – 15 years ago when one was wise to wear tennis shoes on a trip to the beach in order to avoid cutting one’s feet on all the STUFF of life – broken shells, bones, glass, driftwood, etc.
There are also days when I am hard-pressed to find even a half dozen seagulls and/or terns on the county beach.
You can still find a few gulls trolling the picnic areas and some of the restaurants (with outdoor seating areas) for food, of course, but, when I think back to 10 – 15 years ago, the skies and ALL the beaches were literally filled with seagulls and the haunting sound of their cries both day and night…
NOW it’s unnaturally quiet.

26. A study conducted last year came to the conclusion that radiation from the Fukushima nuclear disaster could negatively affect human life along the west coast of North America from Mexico to Alaska “for decades”.
27. According to the Wall Street Journal, it is being projected that the cleanup of Fukushima could take up to 40 years to complete.
28. Yale Professor Charles Perrow is warning that if the cleanup of Fukushima is not handled with 100% precision that humanity could be threatened “for thousands of years“…


“Conditions in the unit 4 pool, 100 feet from the ground, are perilous, and if any two of the rods touch it could cause a nuclear reaction that would be uncontrollable. The radiation emitted from all these rods, if they are not continually cool and kept separate, would require the evacuation of surrounding areas including Tokyo. Because of the radiation at the site the 6,375 rods in the common storage pool could not be continuously cooled; they would fission and all of humanity will be threatened, for thousands of years.”

Are you starting to understand why so many people are so deeply concerned about what is going on at Fukushima?
About the author: Michael T. Snyder is a former Washington D.C. attorney who now publishes The Truth. His new thriller entitled “The Beginning Of The End” is now available on Amazon.com.
Posted by Stock at 11:19 AM