Apex Predators in Hawaii are OUT OF CONTROL, Shark Attacks up 500% as Fukushima Radiation Rolls In

I had to update this on Dec 15 when the numbers of attacks increased from 11 to 14 with Nov and Dec attacks.   Here is the new chart!   Out of control Tiger Sharks! 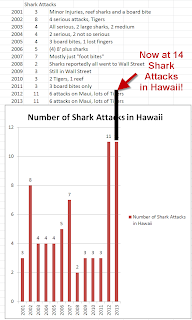 And here, apparently the Big Gov of Hawaii has told the site to stop updating any more shark attacks, as it is not good for the crucially important winter tourism.   Very odd, don't you think? 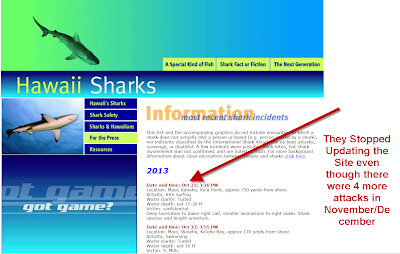 Shark attacks approaching 1 per month in Hawaii, 300% to 400% higher than prior to Fukushima.

The food chain is really being hit hard.

And this article about 4 attacks in Maui in one week, IS NOT THE 4 attacks in the last 2 weeks, its from August!
http://www.eturbonews.com/37064/fourth-shark-attack-maui-past-two-weeks


Check out the chart below. 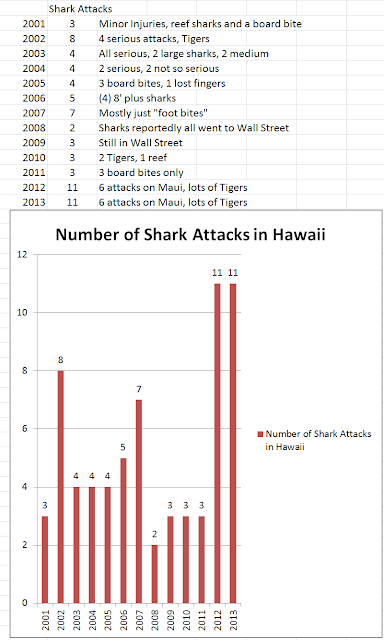 Source data
Also take note of all the nasty algae. Maui has seen explosive growth and excessive amounts of fertilizers and pesticides. Many of the "old school" landowners on the ocean simply rebuild their cesspools on the sly without permit, as a more modern, even a $30,000 aerobic septic system may be required. Also the tour boats that go to Molokini simply dump their human waste into the ocean because for a while they were outside the 3 mile limit. The people of Maui are literally shitting out their ocean. That creates the algae, and if you do kayak or paddle board on the Makena side, you will quite often see fairly new feces floating in the water.

And here is another news story of a Nov 31 shark bite in Maui.....somehow the story was disappeared, even though 2 mile of prime beach was closed.    hmmmm I guess when the bites start coming back to back days, they just have to "do something".   Shark bites not good for business.

And check out this video, a huge shark jumps at the kayak fishermans fish, just feet from his kayak.
Posted by Stock at 6:50 PM