Fukushima WAS a Nuclear Explosion, Here Is The Proof

The only way that the tens of tons of uranium and plutonium shown by US EPA air samples could occur was if the explosion came from within the reactor vessel, and/or spent fuel pool.   So clearly the explosion was a nuclear type of explosion from within.    Nuclear promoters have long stated that nuclear plants can't blow up in a nuclear explosion.    We know this to be a lie.  In fact Chicago's own Argonne National Lab has video from back in the day when it was "cool" to perform open air tests to blow up reactors to prove the nuclear chain reaction can blow up the reactors.    The special type of Nuclear Explosion is called a "prompt moderated criticality". 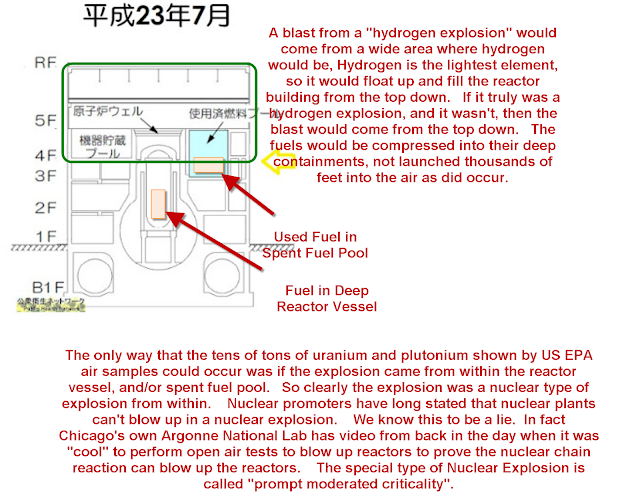 A blast from a "hydrogen explosion" would come from a wide area where hydrogen would be, Hydrogen is the lightest element, so it would float up and fill the reactor building from the top down.   If it truly was a hydrogen explosion, and it wasn't, then the blast would come from the top down.   The fuels would be compressed into their deep containments, not launched thousands of feet into the air as did occur.

I am going to stop calling these things reactor vessels, and instead call them "Radiation Cannons"


This Prompt criticality doubles in power every millionth of a second and causes incredibly rapid power increase that is the destructive nature of a bomb. The second type of prompt criticality is called a prompt MODERATED criticality, which is what I believed happened at Fukushima.


Here is his whole email on the subject
Gundersen Email

Now we do know that tens of tons (at least) were launched into the air and effectively aerosolized by the Radiation Canon (aka reactor vessel).   Simply using the density of the uranium and plutonium in the air as presented by EPA air sampling tests that are data mined to reveal their dirty little secrets.   All that data and the simple calculations to calculate mass using known density and area/volume of dispersion are HERE- 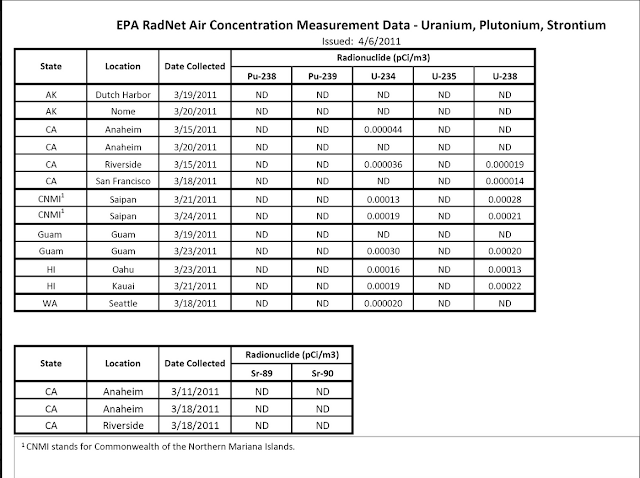 One thing to note, the nuclear promoters know that plutonium is a dirty word, and many laymen know how dangerous plutonium is.   In the table above, EPA states ND supposedly for "None Detected" but in reality, that is a lie as the real story was "not tested".    3 facts: in reactors, as uranium burns, it turns into some percentage of plutonium.   Also any "spent fuel" will therefore also contain plutonium.  And finally in Reactor, aka Radiation Canon 3, they were using MOX fuel which is a uranium with highly concentrated Plutonium.

The nuclear promoters try to lie to cover up their dirty little secrets, to protect "their precious".

Below you find 3 separate sources proving the Plutonium detected in USA and even as far as Lithuania.


And just for good measure, here is the video of Radiation Canon 3 exploding.   Note the huge chunk of steel/concrete that was launched upward, and the apex, it falls off to the left.

Wouldn't it be better to remove the Radiation Cannons from your Backyard?   Remove them all from the HOME PLANET.


Now, why do you think that they are claiming nothing happened at Fukushima, and nothing harmful came out? They cannot afford to let you know the horrible truth of what happened.


Toxicity of both Uranium and Plutonium are functions of their radioactivity AND even more importantly, they are highly toxic heavy metals.    Their One-Two punch is a killer.

All one has to do is look at the photographic, video and levels of rad contamination to show that this actually happened, text book true!
MOX is the deriding factor in this one and it's a "no brainer" if you honestly look at it with any complicated blinders off. Look up the factual time line and the years of research data that support this conclusion!!!

A simple explanation of the evidence (and the truth).
https://youtu.be/B9lv5foUItM

Unit 1 in question? The explosions in unit one were what's called a deflagration. in other words the explosion did not travel faster than the seed of sound, blew outwards versus upwards and was comprised of white smoke versus black dirty smoke indicating a hydrogen explosion from a fuel pool or the reactor venting water that "split" into hydrogen and oxygen. The difference between 1 and 3 are night and day…


Yes it was a nuclear explosion. We did the math here on March 31, 2011 and showed in the Fukushima Mega-thread that a nuclear detonation occurred.

How much energy is required to raise both the refueling crane and reactor vessel cover to a height of 450 feet?

It would require 10,968,750 horse power (HP); by assuming the height of the hydrogen vent tower to be 150 feet, the reactor containment vessel top appears to have gone two and one-half times higher or 450 feet; The top of the reactor vessel weighs 2000 tons. It requires 12.1875 HP to raise one ton in one second.

You have further force required to raise the refueling crane to that same 450 feet of height.

The released happened from the 3/14 nuclear detonation at Unit #3, the big one, the one I keep describing.
Short version: MOX core melts, accumulates in layers on the concrete pad, distinct layers of each isotope in the molten mass by specific gravity. Uranium and plutonium layers hugging each other across the pad. And the shockwave from hydrogen deflagration, instantaneous mixture of the uranium and plutonium along the horizontal plane. Horizontal criticality with massive neutron pulse at sea level along the plane of cascade detonation. Xe 133 is made in vast quantities, exabequerels of it, and mortared up into the atmosphere, carrying along with it the uranium, plutonium, cesium, iodine, strontium and the rest of the layers in vapor or gas form.

dosdos
March 6, 2015 at 10:52 pm Log in to Reply
Add to the the effect this criticality had on the SFP, adding the second volley, which was mostly cesium, iodine, strontium and other byproducts. Afterwards, both the reactor and the SFP were seen emitting gasses hotter than 250°F. This was also mostly cesium, iodine, and strontium class. Most of the Xe 133 was created and delivered from the criticality.
Stations in the US were spiking like crazy with the xenon, in the 100kbq > 1mbq range from 4/16 to 4/20. No one in the US was spared exposure. It went everywhere.

Jebus
March 6, 2015 at 11:03 pm Log in to Reply
Bang Bang Bang… You nailed it dosdos.
Instantaneous energy release.
Instantaneous transmutation of elements.
Instantaneous reactor excursion.
On film…
https://www.youtube.com/watch?v=zGhOW3DLlow
History can not be changed…