MOX-GATE -- "A coverup necessary to prevent the last great hope of the Nuclear Village from being crushed, MOX is not safe"

Here is a link from A Green Road

At the bottom is a video of Reactor 4 Melt Out. This is important. AGR and myself both independently came to the conclusion that TEPCO was also experimenting with MOX in Reactor 4. They were not licensed to, and MOX is way more dangerous. However, the pro-nukers have MOX as their main sales tool to "get rid of existing nuclear waste" and to soup up the old clunker plants using the MOX to extract profits and keep their "precious" industry alive.

Admitting that MOX is EXTREMELY dangerous, and caused a mini nuclear explosion at Reactor 3, AND admitting that the new MOX in the equipment pool at reactor 4 melted out due to its increase reactivity and therefore heat and radiation....well that would shoot their MOX down, and it would shoot their source of their highfaluting livelihood down. And they can't have that, even if the face of ocean killing disasters. So they cover up and lie. At Reactor 4, the new MOX they were loading (ready to load in the equipment pool) melted down and out. And when corium contacts cement, it pretty much immediately releases all its cesium and start making 10 fold the normal amount of strontium. At Reactor 4, spent fuel pool, there was a 9 hours fire, and certainly a lot of poison was released, but that stopped with borated water. But not the MOX fuel, that burned through the stainless steel liner, and 3 feet of concrete. MOX-GATE you heard it here first.

MOX is way more dangerous than just Spent Fuel.    Spent Fuel used to be the most dangerous thing on earth.     Well, the nuclear scientists have now out done themselves.

Here is the proof that Reactor 4 was NOT a hydrogen explosion caused by hydrogen from Reactor 3...incredulously against their claim, Reactor 3 blew up the prior day, no walls, no containment, no hydrogen, even the pipe going the tower can be seen lying open in the rubble.    These "experts" don't even think that we deserve credible lies.

Reactor 4 was a MOX Fire, followed by MOX explosion, and meltout.


Here is the "Federation of Electric Companies" in Japan promoting MOX plutonium fuel.

They state that because Europe and USA are doing it, we should too.   France is the worst offender.   They are bankrupt and stealing from the future by using nuclear. 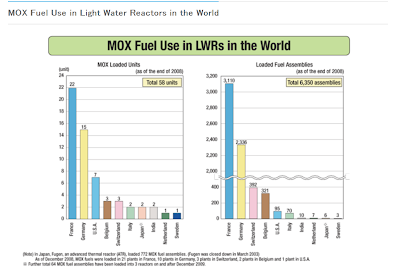 One thing is clear though.     Reprocessing of fuel to create MOX is 10 times more expensive that putting it into Dry Cask.   But the pro-nukers need to have a way to lie to pretend that MOX can make it all go away.    It doesn't, it just avoid that problem of otherwise dealing with the spent fuel, and creates a current income stream and justification to keep plants open.

MOX-GATE -- Now you know why