Just 6 months after a major error during maintenance that caused a massive water drop in the reactor, and thus an emergency shutdown.     XCEL energy instead convinces the NRC that what they need instead of a trip to the woodshed, is to soup up this old 1970 clunker.   NRC agreed to let them burn hotter and heavier to increase their profits.

Xcel promised costs of around $100M for the uprate Soup Up....and instead it was $267M over budget.    Which the rate payers will have to suck up all the costs for.


Monticello is a Boiling Water Design, the worst design, the one that is destroying the Islands of Japan via Fukushima.

I love these Puke Green control rooms from the 1970's, sheesh, such a feeling of confidence!

Note how Monticello in 2012 looks just like Fukushima.    Wow.

Sure glad they got a power update.    And no worries...if they melt down, its only the located at the top of the Mississippi  river....sheesh, no one uses that water anyway.....<ouch sarc> 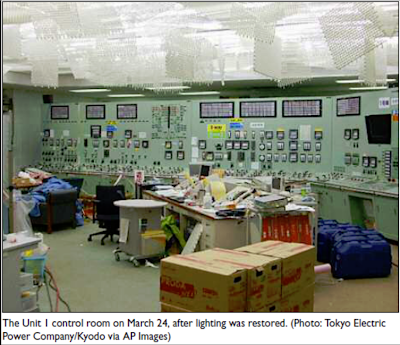 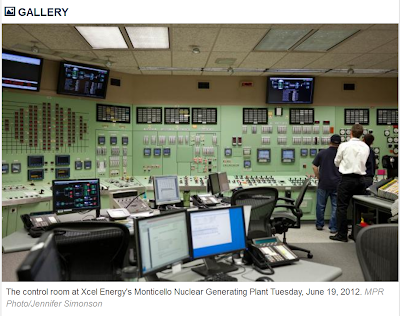 Nuclear Street News Team
In the next month, Xcel will take advantage of recent upgrades to increase the power production at its Monticello nuclear plant by 71 megawatts.

The utility completed an uprate at the plant near Minneapolis in July. On Monday, Xcel announced that the Nuclear Regulatory Commission approved its application for the power increase. Operators will begin to gradually ramp up the power at the reactor in the coming weeks. According a release from the company, Xcel will wait for "an NRC decision in spring 2014 that will allow more operator flexibility before the plant ascends to the full 671 megawatts."

Monticello is a General Electric Type 3 boiling water reactor first licensed in 1970. According to the NRC, the agency last approved an uprate for the unit in 1998. The recent upgrades represented about 40 percent of a larger $320 million refueling and service outage. It experienced cost overruns in excess of $267 million, drawing scrutiny from state regulators.
Posted by Stock at 9:31 PM