Radiation effect, for sure. 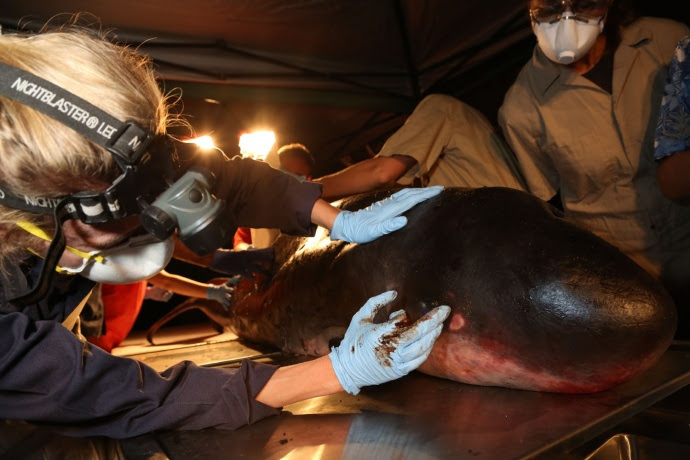 Photo courtesy: Todd Pusser, NOAA permit #932-1905.
By Wendy Osher
A dwarf sperm whale that beached itself along the Kīhei shoreline in South Maui on Christmas Day was a pregnant female that likely suffered from infectious disease, according to a necropsy conducted by  Hawaiʻi Pacific University.
HPU Assistant Professor of Biology Kristi West said the animal, which measured 7-feet in length, was “very ill” with a number of medical problems.
“Blood work from the whale indicated an immuno-suppressed individual,” said West, who noted that “lung abnormalities” also suggested that the animal was suffering from pneumonia.
According to West, the medical problems likely represent an animal suffering from infectious disease.  “A large number of ulcers were apparent in the esophagus and the stomach. A large blood clot in a major blood vessel returning to the heart was also noted,” she said.
The necropsy examination also indicated that the whale was pregnant and had a fetus measuring 22 cm long.
Researchers say the investigation into the death of this whale will continue in the coming weeks to months as HPU’s Marine Mammal Stranding Program conducts follow-up laboratory analysis.  “This will include testing for specific viral and bacterial diseases known to cause the types of medical problems and overall ill health observed in this whale,” said West.
Authorities say the animal was found “weak and stuck in the surf zone,” at around 2:30 p.m. on Christmas Day.
“Volunteers held the animal in low water in surf zone for some time and then built a small sand pit at the mid-tide mark and kept the animal protected from wave wash. Cultural practitioners were contacted immediately and consulted,” according to information compiled by HPU.
“This is a deep-diving whale that typically does not come to shore unless injured or sick. The animal was severely emaciated and in a weakened state,” according to information released by HPU.
Following an evaluation by a NOAA contract veterinarian, the whale was sedated, given IV euthanasia solution, and expired at around 7 p.m. on Dec. 25.   The whale carcass was flown to Oʻahu in the afternoon on Dec. 26 for a necropsy examination at HPU that continued into the early morning hours of Dec. 27, officials said.
According to researchers at HPU, dwarf sperm whales strand in the main Hawaiian Islands once every year or two, however, “they are found only in deep waters, usually in close to 5,000-feet of water, and only on the calmest of days.”
West described the species as “very elusive in the wild,” making them very difficult to study at sea.
“Dwarf sperm whales often exhibit a strange behavior when approached, where they release a cloud of ink made up of dark fecal liquid stored in the rectum, and then they vanish. Therefore almost everything we know of this species comes from what we are able to learn from stranded whales,” said West.
Posted by Stock at 8:11 PM