I busted this troll out of the gate.   Drawing conclusions from limited data is important.   We don't have the "luxury" of relying on the scientific method which is burdensome.    We have to use our wits to get to the answers more quickly.

But what is important, is to know that when Big Nuke Industrial Complex
sends a "high quality" troll, that ENENEWS is hitting close to the mark.    Is making an impact.    These type of trolls are not going to work for less than $150,000 per year, maybe they even demand $250,000.    Shite, this troll is almost as good as I am....just on the other side.     But his lies are still pretty easy to spot.   Because when you are not on the side of truth, all you have is lies.

Pro Nukers are arrogant brontosaurus who see their own extinction, lose their livelihood and social status at the same time.   He pretends that any Uranium and Plutonium detected in Hawaii was "always there", that it was part of the baseline.    But based upon EPA data we know for a fact that Uranium and Plutonium went up 2900% to 3500% compared to the residuals from the Atomic Bomb testing of the 1950's and 60's, i.e. background.

That link is here
Plutonium Admission by EPA 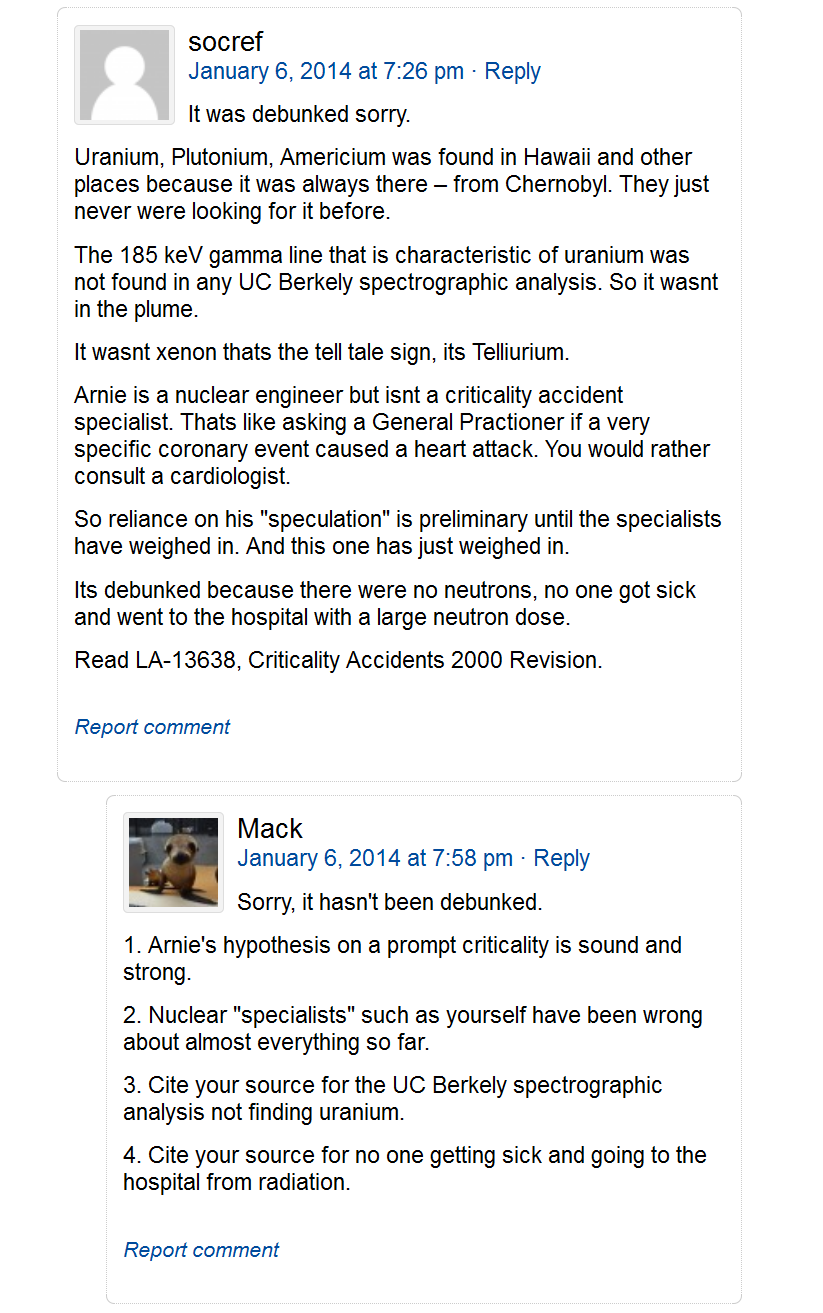 You can visit the thread if you like.    Mack has done an excellent job of debunking the trolls debunks.    Join in.     There are ENENEWS people who would be confused by this level of troll.   Bring it to a stop.    Use it to harden our resolve.

Gunderson confirmed my theory back in 2012, see his email here.
http://nukeprofessional.blogspot.com/p/gundersen-email-and-theories.html

socref
January 6, 2014 at 4:22 pm · Reply
I read the email. There was no evidence of a prompt criticality back then. There would have been a massive neutron count (around 1e18 neutrons) for the total fissions over a microsecond. This is the standard average criticality accident yield as noted in LA-13638. A lot of people would have went to the hospital with acute radiation sickness if that really occured.
The Unit 3 criticality has been debunked.


MACK--It hasn't been debunked.
Arnie offered many reasons why he hypothesized it was prompt criticality:
1. The Upward vector of the explosion at unit 3
2. The red-color on right side of the building during explosion
3. Pieces of nuclear fuel rods were discovered 2 miles from the plant
4. Uranium was find in Hawaii and on the west coast
5. Plutonium was found on-site as a very fine dust
6. Americium was found in New England
7. Transuranics – indication that nuclear fuel was damaged and nuclear fuel was volatilized at Fukushima
8. The blackness of the cloud from Unit 3 indicates Uranium and Plutonium were volatized (turned into really fine aerosol which can travel far and was found in Hawaii, West Coast)
9. Large portion of building of Unit 3 is missing, especially on south side, yet infrared shows heat source still on south side
10. Rubble around Unit 3 of fuel rack, fuel rods, and pieces of uranium and plutonium
11. If it were just a hydrogen explosion, hydrogen and oxygen reaction would create water and would travel at speed of sound and is a deflagration which is what happened at unit 1
12. What caused the explosion in unit 3 was a detonation, further evidenced by the magnitude of the plume and the red flash on the side of building). A detonation gives a red flash.

13. Plausible reason, says Arnie, is that a hydrogen reaction started which then caused the shockwave to move and distort nuclear fuel in the pool which creates a prompt nuclear reaction which then blows rubble out of pool, up in the plume and creates the energy needed to create detonation
14. Arnie says there is a way to test his hypothesis, and that is to look at the types of isotopes in the smoke. Two Xenon isotopes depending on ratio can determine it; the evidence is there but not released by gov’t.
https://www.youtube.com/watch?v=DW5Z77-woCQ
apologies to Arnie if I misheard anything


And I like it that the Troll tries to take me down personally....another sign that I am hitting close to the mark.   In fact, on TARGET.   The troll concludes his obvious attack with "peace"

socref: You wont hurt my feelings when we disagree. Just dont hide behind a curtain and report me for my contributions. Censorship is a one way street. If you really believe that TEPCO is censoring information, that is one thing, but be the better person and not do the same to those that disagree with you. Ive seen some people stay on this site for a very short time because of their anti anti-nuclear stance. Its not that I am pronuclear or antinuclear I am just anti-fact faking. You have to ask yourself what have I done wrong here, but put my training and education on the line to say one thing – that Unit 3 did not explode as a nuclear explosion because the facts just dont stack up. Yes I guess I exposed a chink in stocks armor about his precious theory but at the end of the day even he admits its just a theory that hasnt stood the test of scientific method and validation. Its cost him some street cred and now there is a campaign to censor me? Cmon.
The fact of the matter was that there was an explosion. It was most likely hydrogen generated since the nuclear forensics are not there. Why cant stock just admit he is outclassed in this one particular area, and move on.
Peace.

The only "chink" in my theories armor, as the troll states, is that lots of neutrons weren't detected at the time that R3 blew sky high.     Uh, who would have the neutron detector?    And would the neutron stick around for quite some time?    Hilarious.   His assertion that because TEPCO didn't report neutrons, therefore all the other preponderance of evidence is thrown out.


Others have appreciate Nuke Pro busting this troll

Socref is a troll. Better than AtomsforPeace and even Michael Mann….but a troll none the less. Don't be confused.
No one who has a "real job" can put in the effort he is putting in.

January 7, 2014 at 7:01 am · Reply
thank you for naming reality. foundations of socref's efforts are expertise in one area and deep denial in others. presentation method: mix of facts and sciencespeak with embedded assumptions and persuasive 'nukes are not so bad' opinions. absolutely not neutral. sources of his info appear to be deep and narrow, from one scientific perspective only. information shared has huge white-out about the health impact of releases, information he shares is not integrated with info about human health studies from other disciplines; plus assumptions that academic or in-house nuclear conferences present the entirety of available information on nuclear safety.. (not)..
someone named here that we need folks with this expertise to craft solutions. But how can solutions be crafted when there is such deep personal denial about health effects? As though the lack of formal reports of radiation and immune disorder illnesses, cancer rates, hospitalizations… in Japan…proves it is not there? in the face of all we know about censorship…really?
and basing your understanding of health effects on censored information when alternative info IS out there that has been vetted and published, about health effects of low level radiation releases? kind of blows my mind. but denial is a potent human coping mechanism….all I can do is witness it and name what i see. And yes, I have a perspective that is anti nuke, since tmi, which was about 37 years ago…..by the way, 5000 hours or…

January 7, 2014 at 6:01 pm · Reply
We Not They Finally Here is belated Christmas present. nesimikilic@gmail.com
He is part of the IAEA TEAM that goes to Fukushima,a PHD and now confirmed liar.Tell him how you feel