Folks, Drop a comment after you digest this.  I hope that I am wrong, I am sure that I am not wrong.

WIPP Station 6 Coverup.    At least TEPCO presented the data, even if lying about it.

I was kind of hoping that the "scientists" <quotations, since when you serve your grant funding masters, you no longer serve science>  would release the data Station 106, about 325 feet north of the Station B exhaust port, by Monday 2-24-14.

That filter at Station 106 was collected on February 18, 2014.      It is likely the most telling data  that we know exists to show plume strength into the public airspace.    It is now 6 days later.

If they released the information, then we would have more data to assess the dangers.

What kind of lies might they be trying to conjure up?
"Since the nature of the test is a destructive test, the data on this filter was actually destroyed in the process."
"The sample was contaminated with blown dirt and would not be read out."
"The sample was far below any level of concern"

Let's see what happens,    I will query the WIPP director at this time.

HERE IS THE MAJOR POINT

Plutonium is NOT that radiocative.   Most isotopes have a very long half life, that means they don't "go off" and eject Alpha particles that often.    It is very hard to measure Plutonium on a Geiger.

If they were measuring 4,400,000 Alpha particles released per second, then that is a  major event, because it is Plutonium.       I guess the chicken wire ceiling supports didn't quite work out, and their little "Pre Yucca" experiment is now heavily contaminated.

I wouldn't want to be the worker they send to take the first samples, regardless of Personal Protective Equipment.

1 microgram of Plutonium is pretty much as confirmed kill on a Human if inhaled.    They did tests on Beagles and 255 out of 255 were killed in 2 to 5 years, by the Plutonium.   Other tests on Beagles replicted the results. 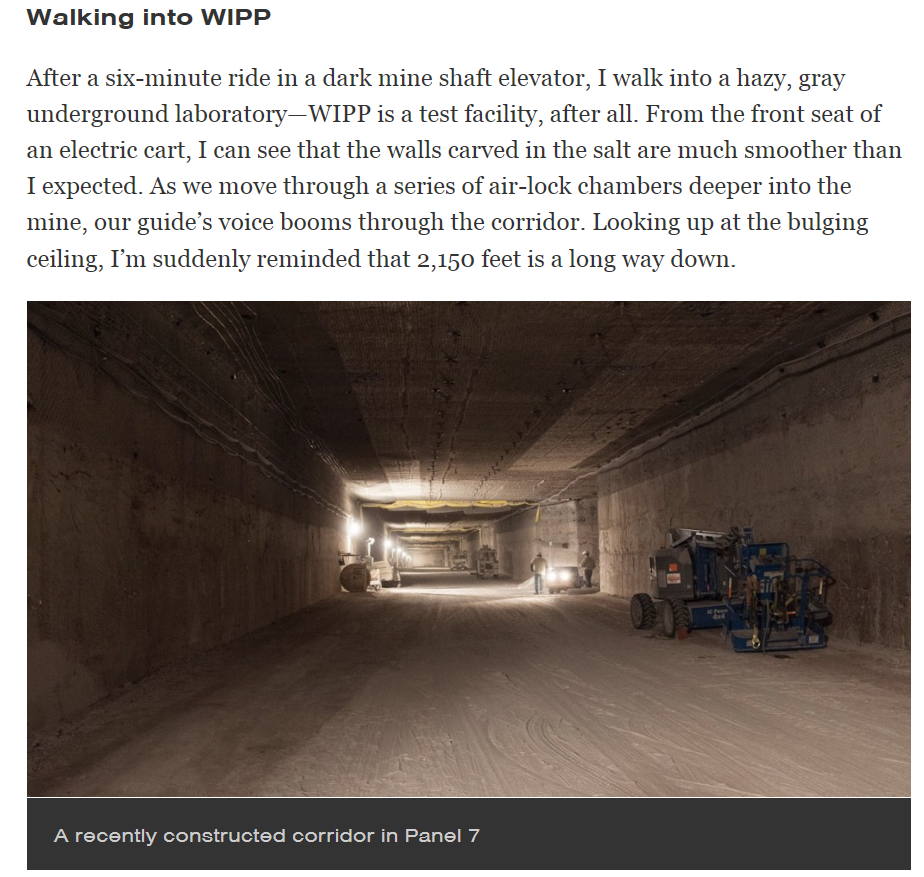 Why is the late reporting on Station 106 suspicious at best?

Now, they are delaying the release of Station 106 for six days?

We know that the Station 107 data alone could account for a low ball estimate of 32,700 human deaths.
The quote below is from the CEMRC which is the monitoring branch, this is from today 2-14-14, and it is the latest article and has not been updated in over 4 days.    Makes you say hmmmmmmm.....


Additionally, a third ambient air sampling station located approximately 109 yards northwest of the WIPP exhaust shaft and within the WIPP property protection area (PPA) has not been analyzed at this time because CEMRC personnel were not able to access the area for collection of the filter until Tuesday, February 18th at approximately 9:00 am. Results from this filter will be released once the destructive analysis and radiochemical separation/counting processes have been performed.

Pictures from a "pro nuke" slanted article from PBS....does this give you that warm and fuzzy feeling.
http://www.pbs.org/wgbh/nova/next/tech/solving-nuclear-waste-with-wipp/ 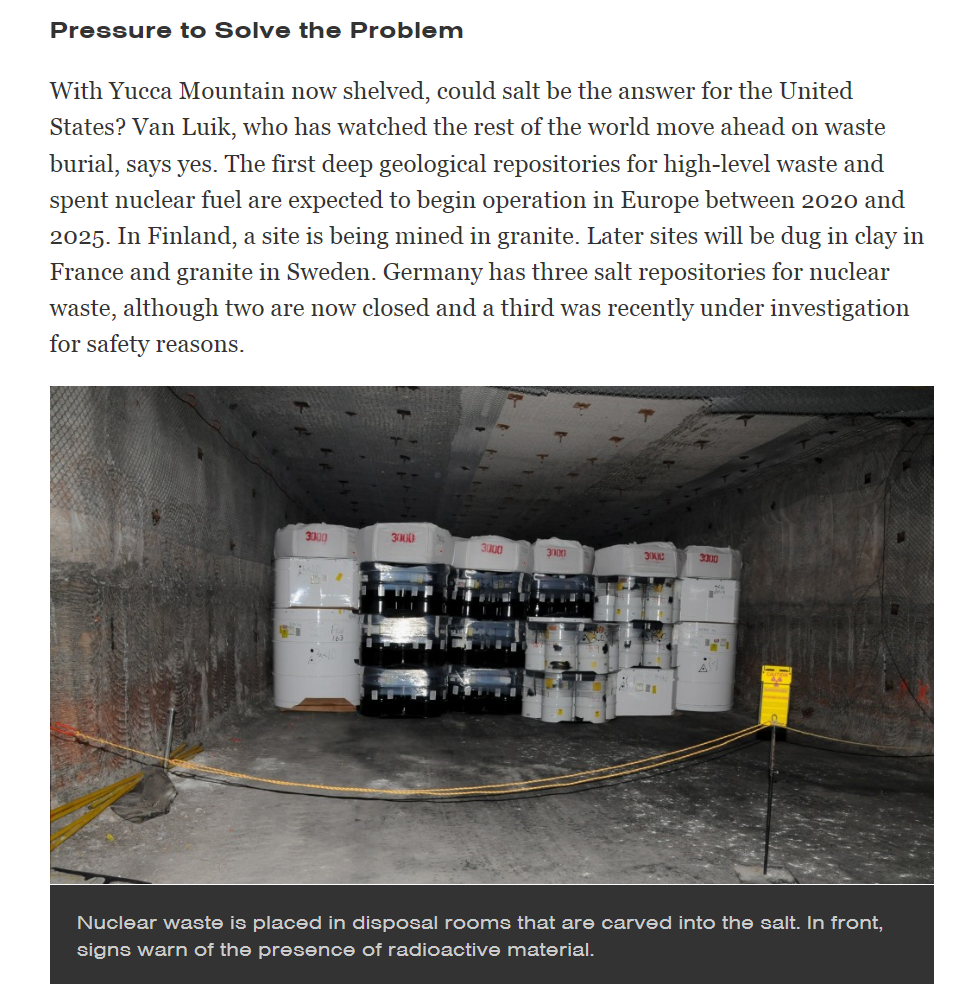 The nuke lobbyists have already suceeded in moving some spent fuel/high level waste into WIPP even though the law is specifically against it.      Info below is from SRIC, and we agree.

WHY WIPP IS NOT THE PLACE FOR SPENT NUCLEAR FUEL

In light of the demise of the proposed Yucca Mountain, Nevada repository, some people are once again considering the Waste Isolation Pilot Plant (WIPP) for storage or disposal of commercial spent nuclear fuel (SNF) or defense high-level waste (HLW). Following are a few of the many reasons to reject any such proposal.

1. New Mexicans have repeatedly said NO to SNF and HLW at WIPP.

At WIPP Environmental Impact Statement hearings in 1979, 1989, and 1997, at various congressional hearings, at numerous other public meetings, in public opinion polls, and at many statements until today, New Mexicans have overwhelmingly opposed SNF and HLW at WIPP. Numerous elected officials, including governors, attorneys general, senators, and representatives have also opposed SNF and HLW at WIPP. Public activities, political action, litigation, and other measures would be taken to stop SNF and HLW transportation, storage, or disposal.

BAN ON HIGH-LEVEL RADIOACTIVE WASTE AND SPENT NUCLEAR FUEL.
The Secretary [of Energy] shall not transport high-level radioactive waste or spent nuclear fuel to WIPP or emplace or dispose of such waste or fuel at WIPP.

3. WIPP is not technically suitable for SNF and HLW.

Many scientists for decades have considered salt to have serious deficiencies in comparison to some other geologic formations for SNF and HLW because such heat-generating waste can rapidly deform salt and create instability that could endanger workers and release radioactivity. In addition, the WIPP site is surrounded by active oil and natural gas production facilities and reserves underlie the waste disposal area, which can result in breaches and releases of radioactivity. Pressurized brine reservoirs also underlie the waste disposal area, which could result in waste being transported to the surface, if a pathway is created.

4. WIPP apparently will fail in its remote-handled waste mission, so it could not safely handle additional and much more radioactive SNF and HLW.

WIPP’s mission includes disposal of up the 7,079 cubic meters of remote-handled (RH) transuranic waste that requires shielding to limit radiation exposure to workers and the public. Because of management problems, there is only enough underground disposal space for about half of the RH capacity. HLW and SNF are tens to thousands of times more radioactive than RH waste, so WIPP could not safely handle those much higher radiation levels.