After doing the Transcript of the Town Hall meeting (read it, took me 3 hours!)

I noted that they denied storing of any high level waste at the facility.

In fact there are hearings coming up whether they should be allowed to store any high level wastes, its a very hotly debated thing in the community.

I do also frequent pro-nuker sites, I like to see what they have to say and to refine my own knowledge.    I go with an alias of course.

His comment was specifically called out by Rod Adams and put into the text of an article.
Rod also speaks directly to Dr Hardy, and others high up in the nuke industry, he is an insider. 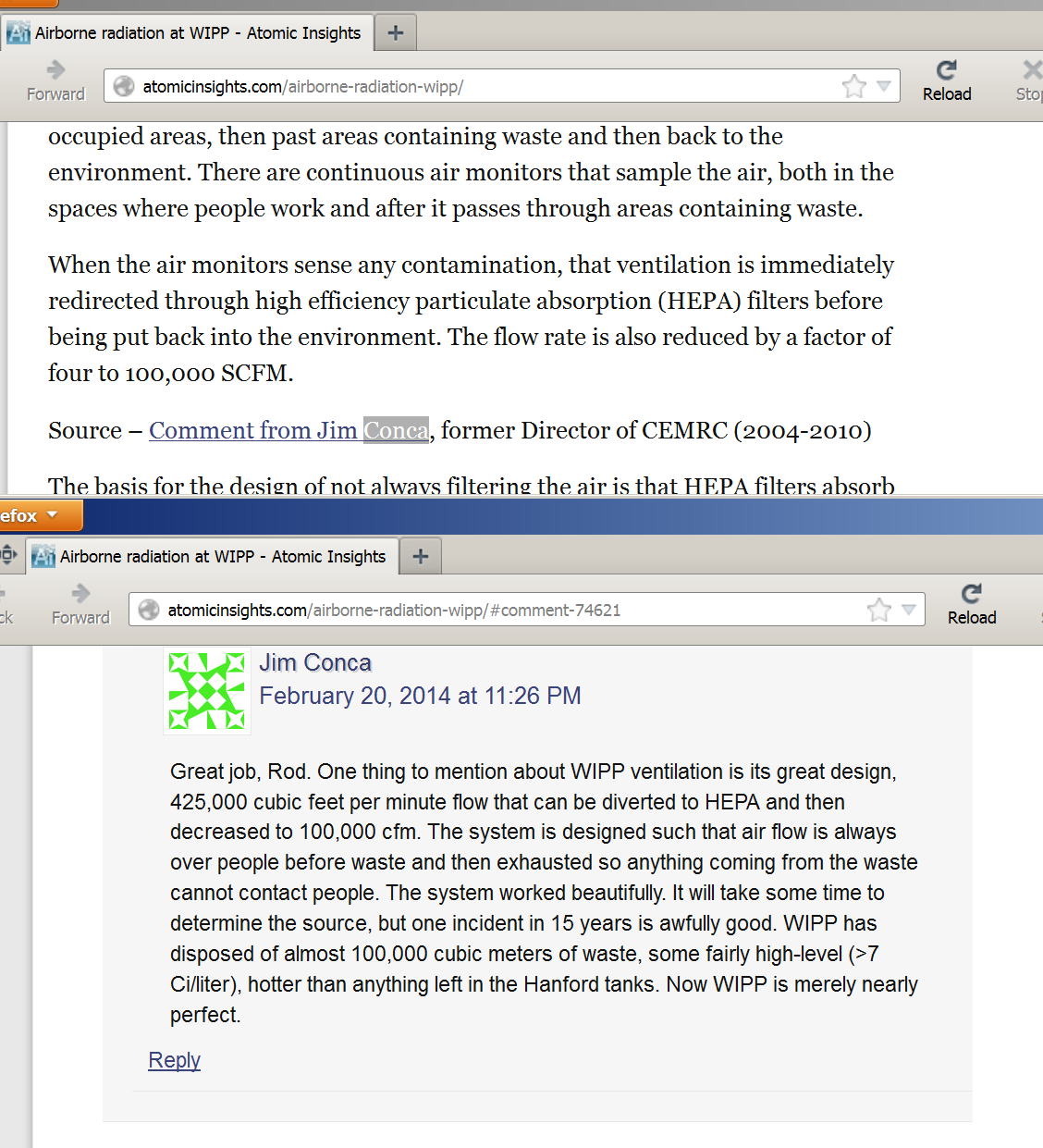 Don't believe, run the links yourself, but here is more from the conversation.    These guys are smart, it is sad when they get down to talking about bananas and flying and dental Xrays.

Jim Conca
February 20, 2014 at 11:52 PM
Hi Rich, you’re right, these high-volume ambient aerosol collect only particulates, like pollen. But the ones we put at WIPP and environs are special. They are 20 x 25 cm Gelman A/E™ glass fiber filters that collect at a flow rate of ~1.13 m3 min-1. After collection, they’re removed using special handling protocols and taken back to the CEMRC radlabs and analyzed for selected radionuclides, including 238Pu, 239+240Pu and 241Am. Following 6 hr of heating in a muffle furnace at 500° C, which drives off organics, the tracers and the iron carrier are added and each filter is treated with HF+HNO3 up to the complete decomposition of silica. Then it is treated with conc. HClO4 and HNO3 for the removal of fluoride ions. The actinides are then separated as a group by co-precipitation on Fe(OH)3. The nuclides of interest are precipitated with LaF3, deposited onto filters, mounted on planchettes, and counted on an Oxford Oasis alpha spectrometer for five days. Gamma-emitters are measured in the air filters by Gamma spectrometry for 48 hours. We routinely get to the femtoCi level.
An important finding of our earlier studies was that the activity of Pu and the concentration of Al in aerosols were correlated and this was driven by the resuspension of dust particles contaminated with radioactive fallout from past nuclear weapons tests. Similar results were found for Am and Al. Related studies of soils collected on and near the WIPP site have shown that correlations exist among Al and both naturally-occurring and bomb-derived radionuclides including 239+240Pu.
If you’re interested, check out the annual reports at http://www.cemrc.org (I was Director there from 2004 to 2010). It is a very nice facility with great scientists.