A reader asked me, what does this WIPP thing really mean, put it in laypersons terms.  And I don't write quick, but after 3 hours, I think this will be understandable to many people.


We don't know how much they have been lying, but one thing is for sure, they attempt to cover up, and then they attempt to minimize, and then they attempt to confuse the issue, and then additional admissions come out (usually).
For sure, a lot of Plutonium and Americium came out in the air.    And it came out for weeks because they had some open ductworks prior to the "good" HEPA filters, so the contaminated air was blasted out through an opening at a high volume rate.      We only have their numbers to work with, so it could be highly variable.   We know that TEPCO has lied for years, and when they do fess up we find they have been lying by a factor of 10 to 100.     The more they have to lie, the more they do lie. 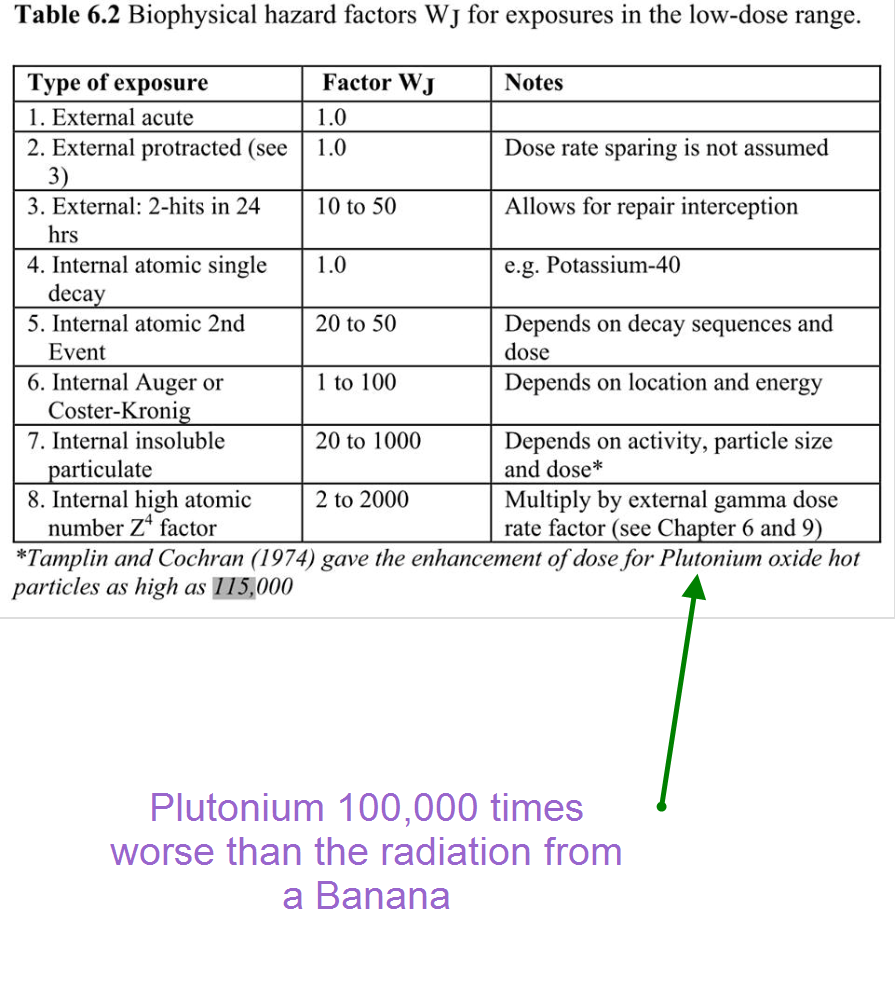 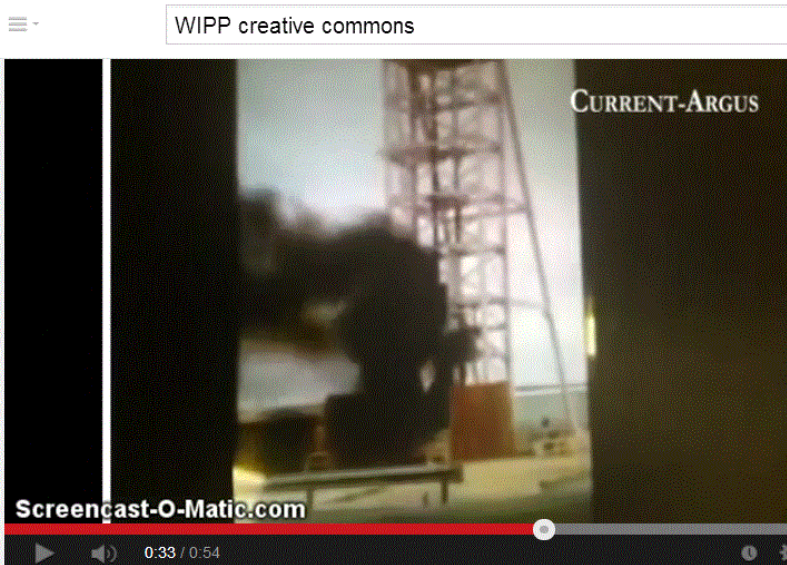 OK what does this CFM mean?  Well it’s Cubic Feet Per Minute.   What does that mean?   Well let’s use an example.    A really good quality kitchen exhaust fan (not the cheap ones you often see at a house) but a gourmet kitchen or a light commercial kitchen will have an exhaust fan that can push 500 CFM.    That’s a lot of air!      Well the amount they were exhausting was like 2000 of this really good fans.     And 10% to 20% was going direct to atmosphere, so that is like 200 to 400 really good fans, pumping the radiation accident direct into the atmosphere....and that lasted for several WEEKS.
Grams, a Pretty Small Unit of Weight
OK now to bring the concept of "grams" into something you can relate to.    Picture a dime, and make it a silver dime, you know back before 1963 when money was “real money”, back when you sometimes trust what the government was telling you?   Right, back in the day before spin was “in”.      OK that silver dime weighs 2.5 Grams (g).   Now what if it was Plutonium?    Well Plutonium is a VERY heavy metal, in fact it weighs almost 240% more than silver.   That’s heavy.     OK so some Plutonium (Pu), about the size of a dime would have 240% more mass than the silver, or roughly 6 grams of Pu.    That is equal to 6,000,000 micrograms.
Some people state that a single microgram can kill a person, so if that dime size material was vaporized and exhausted out the exhaust fans, AND it was distributed equally to 6,000,000 people it could kill all of them.     Well I don’t think that Plutonium is that dangerous, at least on the basis of “is it almost for sure going to kill you”.   I think a better number for “almost for sure going to kill you”, is about 300 micrograms of Pu.
You got a calculator?   Sheesh, don’t make me do all the work, divide 6,000,000 by 300 and see how many people could be killed “almost for sure”.   Again based on that amount being equally distributed among those people.
How many “dimes” of vaporized Pu do you think came out of that radiation cave with 200 to 400 high quality fans pumping air out, with 10% to 20% of the air bypassing the filters, for weeks on end?     How much dust do you get when you vacuum your house and it doesn’t even look dirty?
How many 55 gallon barrels of high level waste do they have in that cave?    500,000 total and about 2% to 4% is high level (highly dangerous concentrations).    4% is supposedly the maximum they are planning on storing in their cave, but in reality, in their deep dark hearts, the nuclear “scientists” who don’t give a rip about you and want to put all the waste, even from nuclear power plants down there.   And if YOU don’t shut them down NOW, at this crisis, and while they are being caught in their lies, then it will happen, they will stuff that cave full of everything radioactively dangerous in the country.     Either way, stop now or fill to the brim, I would never ever live within 50 miles of that radiation cave.
How Much High Level Waste Have They Put Into WIPP?
4% of 500,000 barrels is 20,000 Barrels of high level waste, that’s a lot!    How high is “high level”.    Well the former director of the “independent” monitoring agency for WIPP was caught bragging on a pro-nuclear website called Atomic Insights, just recently,  that they stashed very hot liquids down there, “hotter than anything at Hanford, 7 Curies per Liter”.      Google “Hanford Radioactive Waste” and realize that what they are trucking into New Mexico from all over the country is worse than that.
A Liter is Almost the Same As A Quart
OK let’s bring it home again.   You probably know what a Liter is…it’s what most larger soda bottles are, about the same size as a Quart.    OK simple enough on that one…now we get to the tricky part, the part that the pro-nukers count on, using varying engineering units so that people just turn their brain off and never get a “gut feeling” for what a radiation unit is.    Don’t turn your brain off yet, follow me down this last rabbit hole just a little bit, and I am going to convert that 1 liter of radiation at 7 curies, into the amount of Chickens that would be contaminated to the point that you shouldn’t EVER eat them.     OK how many Chickens?
Curies & Bq (or Becquerel) Are a Way to Measure Radiation.   Curies is A LOT, A Becquerel is A Little.
7 Curies is 259,000,000,000 Bq and if you want to run down these rabbit holes yourself, you can use this really cool online calculator, here is the proof of those numbers.
http://www.wolframalpha.com/input/?i=7+Curies+is+how+many+Becquerels
50 Bq per pound is the upper limit in animal flesh for radiation.   So for the average Costco size Chicken at 5 lbs, a total radiation load of 250 Bq would be a rational maximum.
OK can your calculator fit 259,000,000,000 divided by 250 Bq?     I’ll give you the answer, about  1 Billion Chickens contaminated from 1 liter of that “hotter than anything at Hanford” liquid.
OK That is One Liter, How Many Liters Do They Have In That Cave?
OK how many liters in a 55 gallon barrel?     It’s actually fun to ask the online calculator and make IT do the work.
http://www.wolframalpha.com/input/?i=liters+per+55+gallon
The answer is 208 Liters per barrel.   And at 1 Billion Chickens per Liter, that is 208 Billion Chickens that could be contaminated by 1 barrel!     Is there even 208 Billion Chickens in the whole WORLD?   There are only around 6 Billion people.
Now are you starting to understand the incredible danger of what they are doing in that cave?    They have at least 20,000 barrels of this high level radiation down there now.     And another 480,000 barrels of other radioactive waste.   And they want to keep adding more, and they want to expand the scope to include even more dangerous stuff.

And then they tell us “take it or leave it”, we either stuff it in the WIPP cave or we just leave it were it is at.    Huh, an ultimatum from these “scientists” who made the mess.   This is another false argument of Limited Choices.   And no, “We The People” do not accept limited choices, especially when you are putting our children at grave risk, and us too, at grave risk.

Putting it all in one place does not make sense, especially because we now know that when these various wastes mix up through corrosion of the steel containers they are putting in the salt, or through accidents where one barrel blows up and ruptures others, or a ceiling collapse.

The “scientists” who created all this really dangerous waste never thought there could be a large collapse at WIPP, but it happened in the past, the day after workers were in a cave section called a “panel”, and more than    It was beyond their “design basis”.   In other words, their assumptions were not accurate enough nor careful enough from the beginning.    Now their response is “we have to keep going, we have to keep filling WIPP up, because there is nowhere else for the waste WE created to go, and we will just have to use bigger bolts so the ceiling doesn’t collapse so fast.” Didn’t we hear here that expression before when government officials were trying to cover up a big scary problem at Amity on the Atlantic ocean “I think we are going to need a bigger boat!”.      LOL 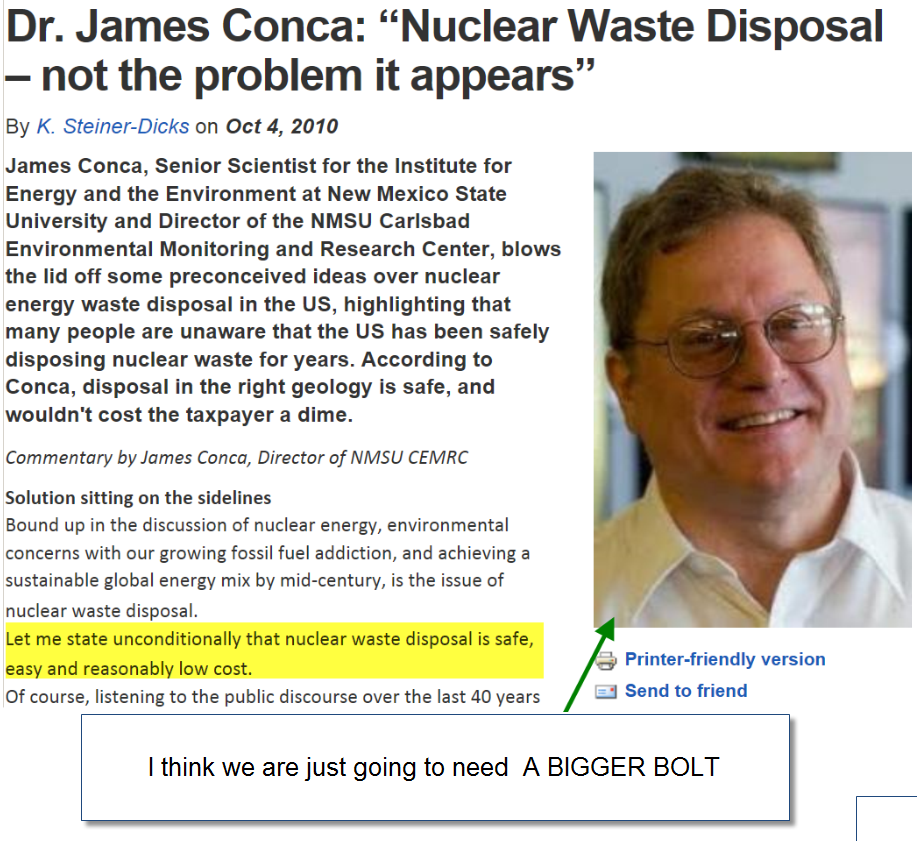 The bottom line is that these “scientists” who are trying to cover up their stinking mess are ignoring new information as it presents itself, and are “all in” on stuffing all the waste into one place in New Mexico which will, perhaps sooner rather than later, become inaccessible and therefore impossible for us to deal with any problem that comes up.     And they don’t care about you, they will lie to you.    The former president of WIPP (Mohammed Farok Shariff) went on video at the town hall meeting as stating “it is like getting a dental X-ray”.    Ask him about that when you see him at the local grocery store buying a chicken.

Hmmm, eh Mohammed, are you really telling the little people that sucking down plutonium is like a dental Xray?     Wow.
And now they tell you to trust them, they got it all figured out now, and the only reason they are going slow now in getting back into the cave is “because so many people are interfering”.

In the meantime, because the accident area is too hot to enter, they are paying over 1000 people full wages, while not working,  at a cost to the taxpayer of around $640,000 a day.   Seems like I could rent a robot and get them down there to assess things for less than a few million, right?   They want to make sure the gravy keeps flowing so the whistle-blowers keep quiet.
URS is the parent corporation of the private company who runs WIPP under “family” supervision from DOE.      URS also does work at Hanford where there have been allegations from fired employees who claim they are whistleblowers who were cautioning the company and DOE against the chances that mixed radioactive liquids could off gas hydrogen and blow up in a massive accident.   Does any of this sound familiar?
So folks, does that bring it home? Do you now know what you need to do?