Then of course, we forgot that water in pipes and pumps will freeze in winter thus expanding and breaking the pipes and pumps, especially the ones we didn't insulate, so that caused trouble.   Of course the water filtration system for the initial batch of radionuclides broke several times and a few times the workers sprayed themselves with concentrated radiation because they didn't understand how to operate the valves.   Then the ALPS system, meant to take out the strontium, was years late and then hardly worked.    But that's OK because we were instructed by the nice economic hitmen from USA nuclear cartel to just ignore the strontium altogether or at least report it a one millionth of the real level.   Actually one of the economic hitman, and really hitwoman, Hillary Clinton, who assured us that USA would jack up their allowable levels in food 10 times higher and buy all our food exports without testing any of it...as long as we followed their corporate interest and rolled out the BP game plan. 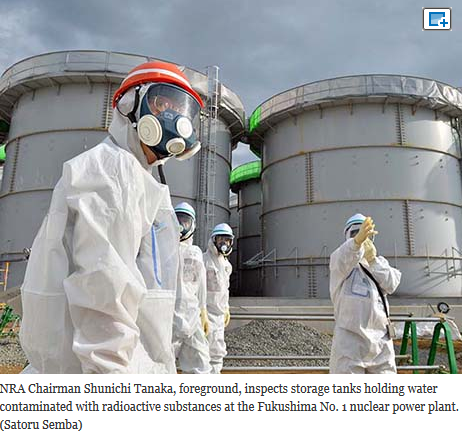 We tried to stop the water from leaving the plant area after contacting the 2 or 3 underground coriums (honestly we don't know).     But whatever we tried in keystone cop fashion, it didn't work.     We finally figured out from going to a "Nukepro" website that what we should have done was to block and divert the old river water that was coming into the plant area....i.e. block it on the upper side and pump it out and around BEFORE it got to the coriums.    Sheesh, we wish he would have told us that out of the gate, but by then we were committed to pouring "special concrete" and then large investment in the high technology ice wall was well underway and we couldn't be distracted from executed that plan that had already been approved.

We are very sorry, but it's not our fault since GE told us they got our back with media coverage and will even help us get some Olympic money.

And that is a good thing because GE owes us because they made us take down a mountain and build the plant basements below ocean water level and in the river bed....all because they refused to redesign their "Mark 1" pumping system to pump water up to the original land height that the plant could have been built on, and safely out of tsunami way.    So, GE owes us, and bring on those Olympics, we are not concerned that the finest physical genetic examples of humans will be placed into a high radiation zone likely of producing internal contamination since they will be trained to smile, and with the GE news cameras all over, they are more likely to be smiling all the time.   Big Ol' Yamashita smile to everyone!

We are kind of out of ideas, but we find that it doesn't hurt to dump radiation and heavy metals into the Taiheyo (Pacific Ocean) since the only 2 people testing for radiation in the Pacific is a crippled old ex-commercial diver in a dinghy in Canada, and some solar guy in Hawaii who is taking video of radiation in airplanes and radiation in boiled off seawater.     Oh, and Woods Hole is doing some "testing", hehe, that was real slick of the radiation industry to pretend their testing was "crowd sourced" whilst the majority of their money for operations and their salaries was from government and corporate interests.

Even though the ocean is clearly dying, we hope we can bring it back by restarting reactors (aka Big Green) in order to reduce CO2 and global warming.     Nuclear is the only thing that can save our world, even though the president of GE stated that nuclear no longer makes any sense.   As a representative of TEPCO I often feel confused and stressed out because GE won't even tell me the meaning of Cognitive Dissonance.

But after touring the plant this week, it is clear that those tanks are the biggest danger to mankind and the plant.    After all, those tanks are a big threat, if one breaks, it will contaminate the tank farm areas, and then how can keep employing those untrained alcoholics to walk through the tank area tighetning bolts on the bolt together tanks that are already beyond their design life?     More tanks could break and then the whole plant would  be contaminated.     We would have to evacuate, and then some of the fuel under 5 years old could boil off the water and go on fire and then where would we be?    Back to square one.   Plus now we in within 5 years of the Olympics, so we cannot allow any risk to the Olympics.

Clearly, although some people may be upset, the only responsible thing is to dump the tank water into the ocean to protect people.    Ganbate!