Radiation in the Ocean Food Chain, An Assessment of BioMagnification


A good report on bioaccumulation, I will summarize when I can, bottom line....causes increases of 1000's of times. 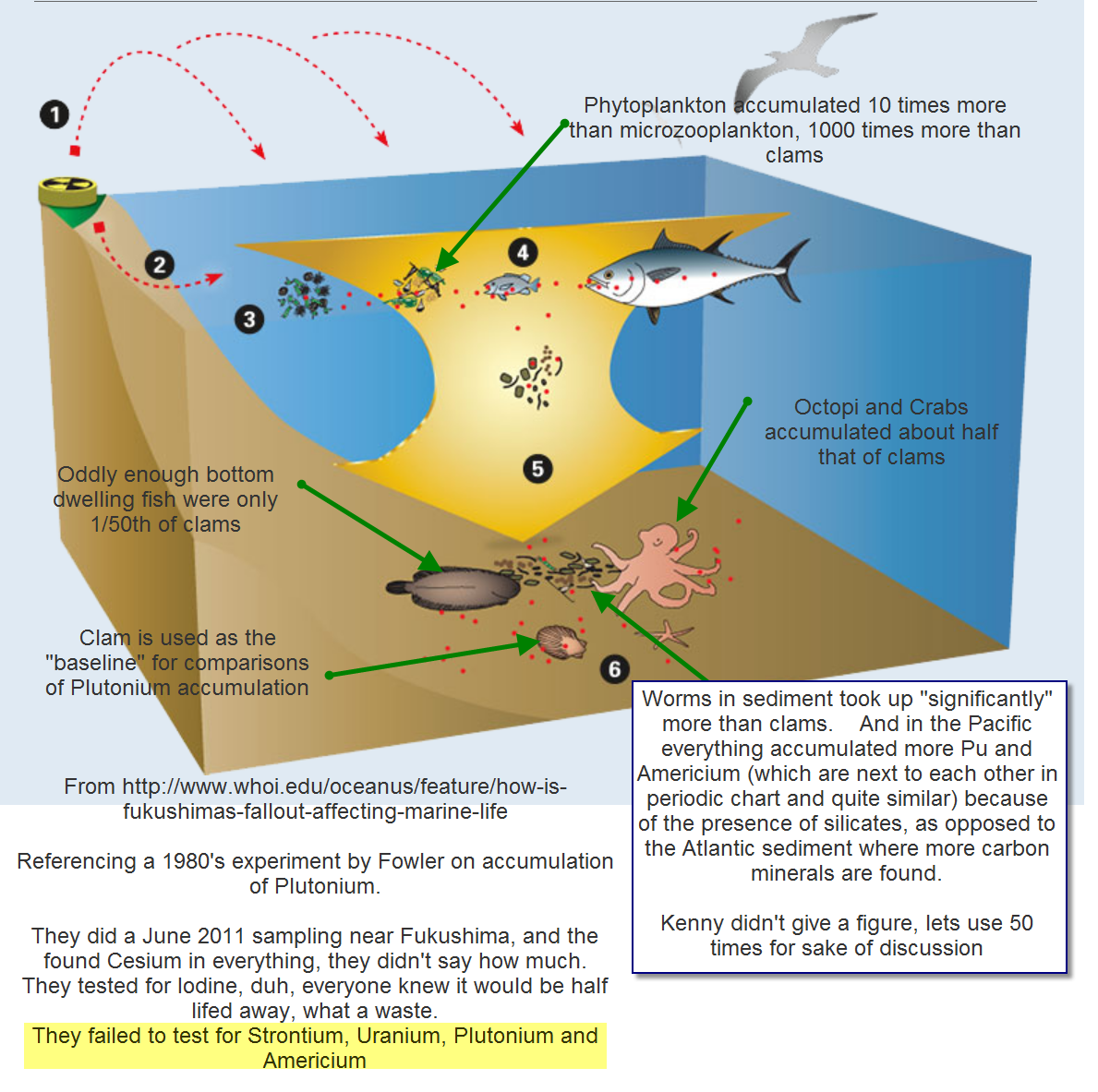 Then I tried to come up with actual radiation measurements in the water and the animal life.   The link below has decent water data, and some limited fish and ocean biota.

Interesting though....rather then doing testing on Marine Life, they do a lot of testing on water and they do modeling of ocean flows, and it seems a prime objective is to calculate the "source term" of what came out of Fukushima.     This Source Term is an estimate of what and how many radionuclides left the buildings.    Is seems odd but I guess that is what scientists do....calculate things.

But since they are in the ocean on  a boat equipped  with advanced radiation analysis equipment, and the ability to catch fish.     It sure seems like my prime focus would be to test the fish! And the bait crops.

The above is the main article.     You need to do quite a bit of bouncing around to get to the meat of that data.


Chart below  shows that contaminated water does not mix vertically much.     The radiation stays in the top 300 feet primarily.    It stays where 95% of the fish and critters stay.   It stays where it can do the most damage. 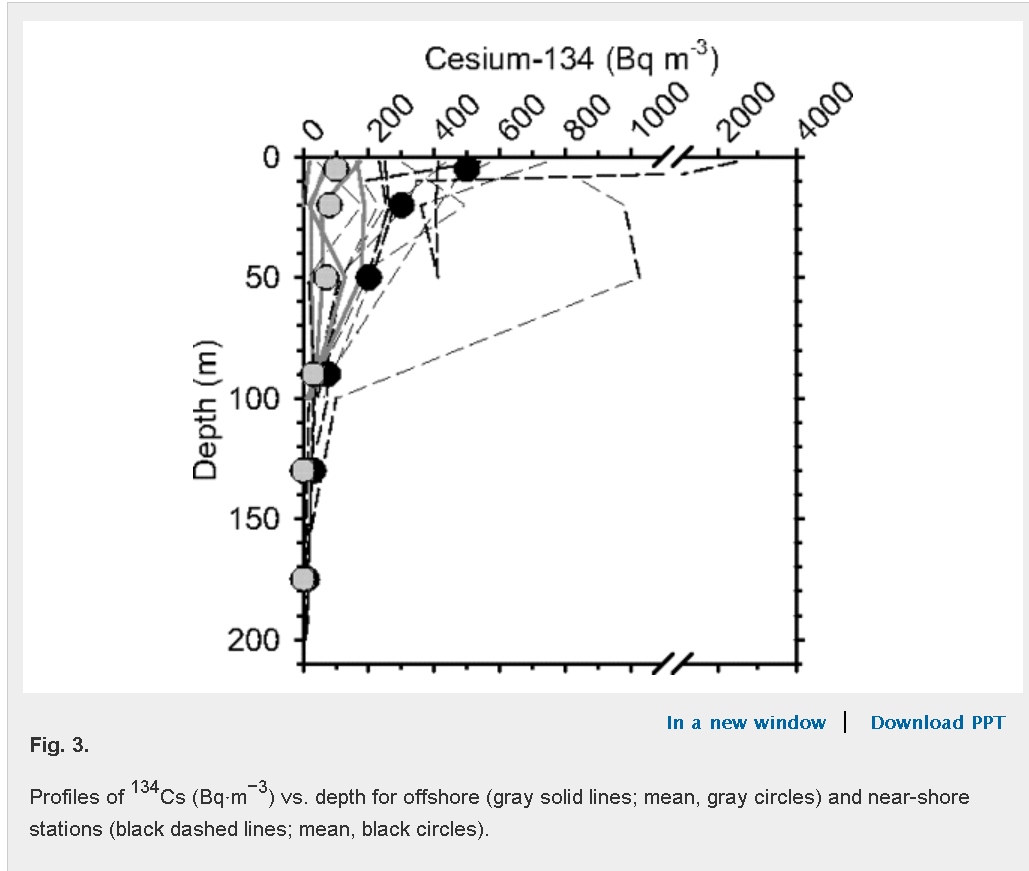 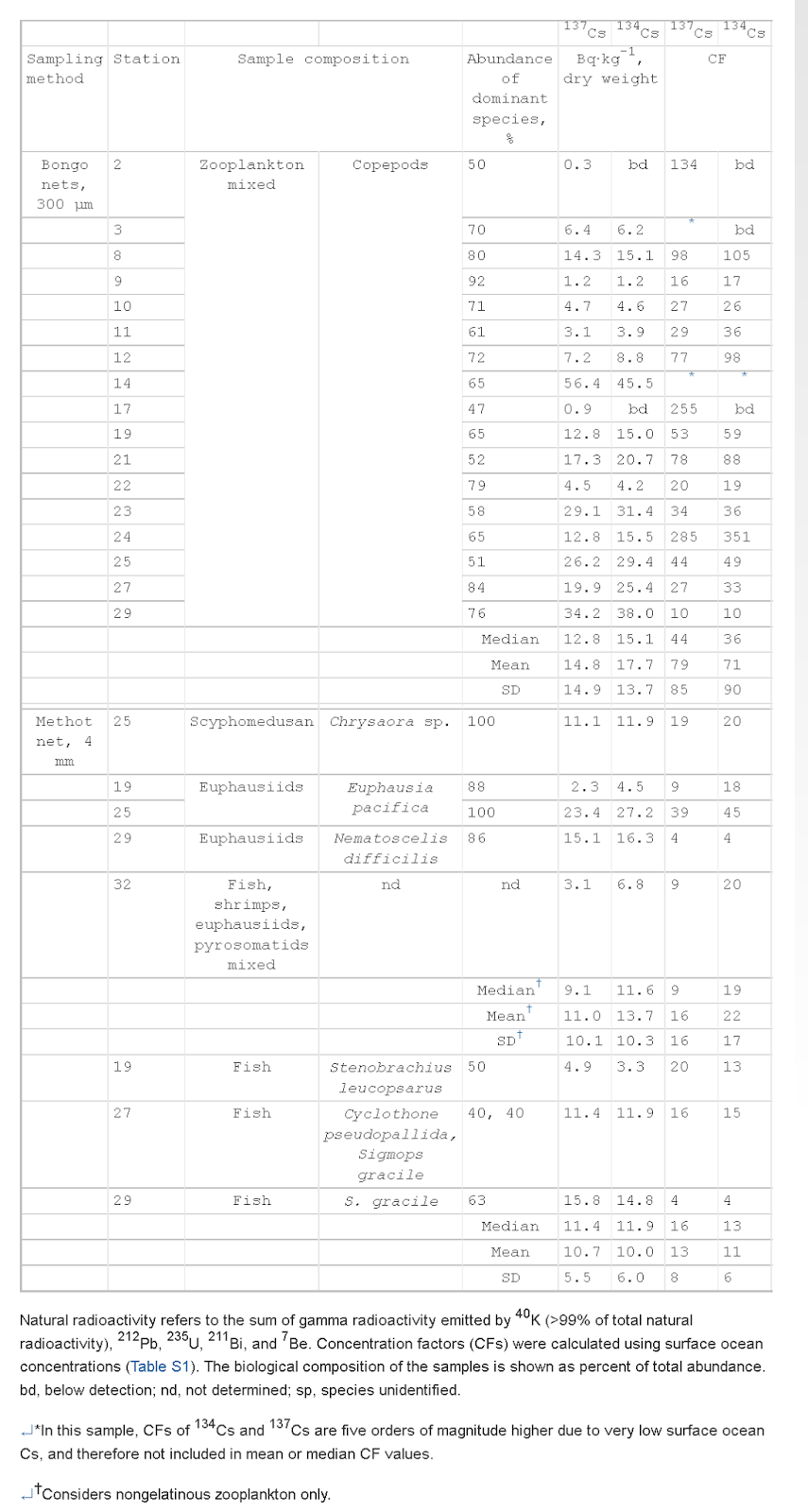 Finally, the bogeyman that no one wishes to speak of.    Strontium.    Strontium goes into bones and becomes a permanent part of the food chain.

This article states that the Strontium can be present in same levels or more, than the Cesium.

Radiostrontium in the western North Pacific: characteristics, behavior, and the Fukushima impact.

The impact of the Fukushima-derived radiostrontium ((90)Sr and (89)Sr) on the western North Pacific Ocean has not been well established, although (90)Sr concentrations recorded in surface seawater offshore of the damaged Fukushima Dai-ichi nuclear power plant were in some areas comparable to or even higher than (as those in December 2011 with 400 kBq m(-3)(90)Sr) the (137)Cs levels. The total amount of (90)Sr released to the marine environment in the form of highly radioactive wastewater could reach about 1 PBq. Long-term series (1960-2010) of (90)Sr concentration measurements in subtropical surface waters of the western North Pacific indicated that its concentration has been decreasing gradually with a half-life of 14 y. The pre-Fukushima (90)Sr levels in surface waters, including coastal waters near Fukushima, were estimated to be 1 Bq m(-3). To better assess the impact of about 4-5 orders of magnitude increased radiostrontium levels on the marine environment, more detail measurements in seawater and biota of the western North Pacific are required.

We also know this from our work on estimating the overall source term of all the nuke waste at Fukushima.     The strontium is about equal to the cesium.

Wrap your head around that.

The soil and lichens have VERY high radioactivity.   6000 Bq /kG!    30 Bq/kG is dangerous to animals and above 100 Bq/kG said animals cannot be sold.


Here is the full report you can download.   This is an extensive and quite scientific bio-assay of the Alaska waters in June 2011.     They don't plan on going back until 2016.

So this survey is only 3 months after Fukushima, the opportutnity to bio-accumulate didn't have much time.      3.5 years later, results would be interesting
https://app.box.com/s/rt4g13nxvqyljfqxmdxt

For your reference pico is 10E-12, or one trillionth
pCi is one trillionth of a Curie
A Curie is a relatively large amount of radiation
One Curie = 3.7E10 Bq

Effects on Populations of Exposure to Low Levels of Ionizing Radiation ( 1972 )  http://www.nap.edu/openbook.php?record_id=18994&page=R1

1994/5 Evaluation of a Performance Assessment Methodology for Low-Level Radioactive Waste Disposal Facilities  www.iaea.org/inis/collection/NCLCollectionStore/_Public/26/063/26063964.pdf
- clip "The PHG is based on the known carcinogenic effects of radiation observed in humans. In 1999, the U.S. Environmental Protection Agency (U.S. EPA) published“ Cancer Risk Coefficients for Environmental Exposure to Radionuclides: Federal Guidance Report 13”"
Have fun and thank you for all you do

The nuclear complex has known since 1953 that radionuclides – such as Strontium-90, pose irreparable risks to the biosphere.
Read about Project Sunshine
http://majiasblog.blogspot.com/2015/02/project-sunshine-and-failed-paradigm-of.html
After completion of Project Sunshine (which followed Project Grabriel) the AEC commissioned many studies on bioaccumulation in the environment, which I review here:
http://majiasblog.blogspot.com/2014/11/bioaccumulation-cesium-is-one-among.html
A separate study funded by the Rockefellers – BEAR – was published in condensed form in 1956. The genetics subcommittee warned that radiation induces heritable mutations that are transmitted across generations, with potentially devastating long-term impacts to the human genome:
http://majiasblog.blogspot.com.au/2012/06/systematic-study-in-first-bear-study-on.html#comment-form
The nuclear complex has known that radionuclides poison life and yet the complex took little-to-no-action to stop the growing contamination of planet Earth, upon which we all depend.
The nuclear complex is leading us toward our extinction. But first we get to watch the animals we love die from our greed, corruption, and denial.