Risk of Asteroid Collision in January 2015


Scores of GIANT asteroids on course to hurtle past Earth within the month, NASA reveals

According to NASA’s Near Earth Object Programme, there are 68 ‘close approaches’ forecast before the end of next month

I cannot forget that these same astronomers had warned us several weeks in advance about a totally different asteroid passing near the Earth, coming from an entirely different direction than the Chelyabinsk meteorite (for which we received no warning) the very same day that it exploded over Russia.  What are the odds of that?  Talk about a coincidental blind spot!  Weird.

Actually, Nukepro covered this event in detail.    It was caused by a debris field, and it WAS NOT from a different direction, just that the Eggheads who are pretending they got your back, miswarned.

The odds were 539 Million to 1 that the 2 asteroids were "just a coincidence" as the scientists immediately promulgated to the lap dog news media who couldn't think their way out of a paper bag. 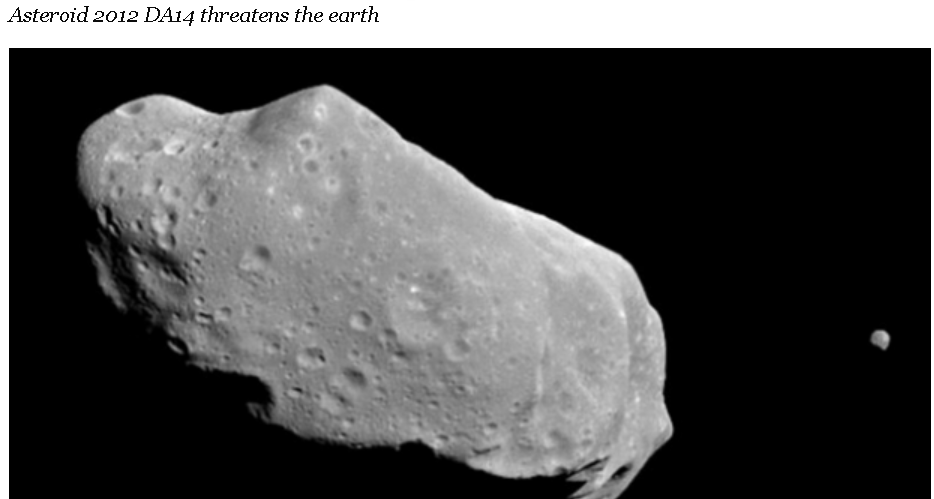 In October 22, 2012 I did a post about a scenario in which scientist knew that Earth was going to fly through a cloud of meteors.    Would they tell?      Or would they mislead?     The answer to that should be clear.    The current Powers That Be will do anything to avoid panicking the sheeple.   If there was a .000001% chance that we wouldn't have a major hit, they would cover up the information.

And here is a FREEBIE, you can download your own Asteroid Calculator in which you can adjust size of the 'Roid, speed, and density, and have the calculator tell you the equivalent number of atomic bombs.

And here is another story on the January of Doom, lol, apparently a lot of asteroids are coming our way in January.