Ginna Is Lying Through It's Teeth by 1125%, $43 extra per customer per month to Cover It's $245M Fine for Fraud and Rate Fixing

Now they say that they have lost hundreds of millions over the last few years.    And they want to stick it to the rate payers.    They want to keep this 45 year old plant open for 4 more years, charging rate payers up to $17,500,000 more per MONTH!

This is covers their fines for Fraud, and make up for lost profits.   Disgusting these pigs.

The latest calculations from the de-liar, the Nukepro, shows that their written submission could see them charging customers up to $43.75 extra per month, and keep in mind, these people have been convicted of fraud and rate rixing.    So why would they not charge near maximum amount?

The start of the propaganda in Nov 2014

Succinctly, you either pay us more or we drop you in the dark:


"One thing that consumers want more than anything else is reliability.  they want to know the lights are going to be on when they flip they throw the switch.  And if that involves a mixture of some power that costs more than others in the mix, people understand that it's worth it, because the lights go on and stay on," said Mike Power

As for a solution, Power says there won't be one anytime soon.  Talks between all parties involved will likely go on behind closed doors for years.   Meanwhile, Ginna continues to produce power but lose money.

Exelon / Ginna states that saving the plant will "protect critical tax revenue"  for the region.    hmmmmm, can that even pass the straight face test?     The tax revenue  is being paid by Ginna  after it collects the money from the rate payers.      Wouldn't it just be better if the rate payers just kept that money without it shuffling around and being chewed up in government inefficiency?

I see, so people are worried that these extra charges could stick around forever.    But wait, their is a "seperate plan"......

The "transmission and distribution upgrades" in the Exelon statement refers to a separate plan that RG&E has proposed to limit the duration of surcharge payment.

Right but Exelon s plan can be approved without the other plan to limit duration ever being approved.....and the subsidies can go on forever....

Exelon could choose to keep the plant in operation after that if market conditions warranted.

Nukepro calculates that Exelon will be authorized to charge Ginna customers 6.3 cent per kWH more than they are charging now.    See the spreadsheet below. 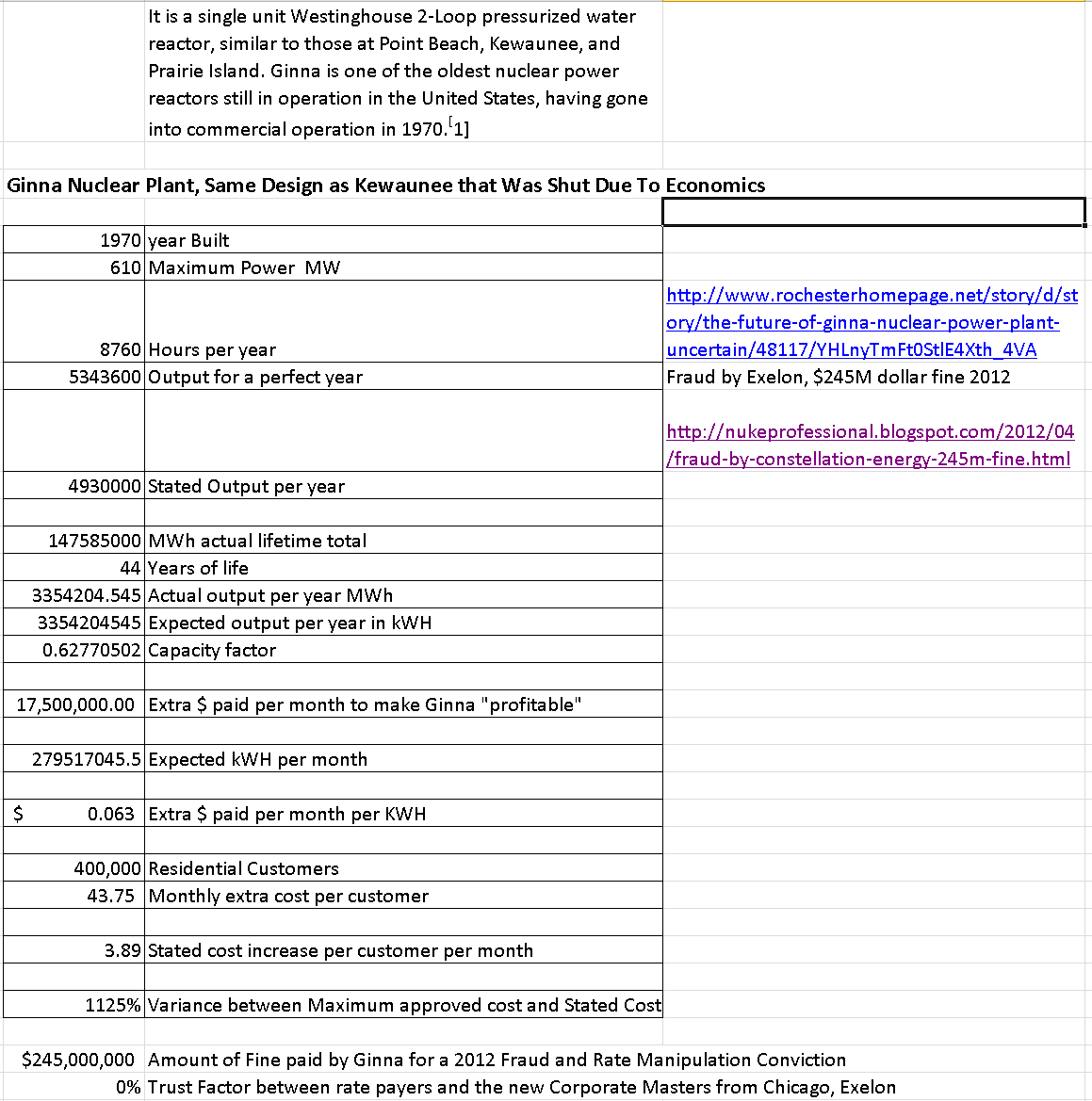 Here they calculate that the rate payers would be extorted for $75M to $100M a year from these convicted fraudsters.