In an article an anti nuke speaker was stating that remarkably only 4.7 kG of Cesium escaped from Fukushima, and only .75 kG of that landed in Japan.

Considering that the original amount of Cesium at Fukushima (this is called the Inventory) was over 3000 Kg, and considering all the explosions and fires, the statement that only 7kG left the plant is on its face just ludicrous.    But we can show this with facts very easily.

If you grab my inventory calculations from this article, and add the column which shows grams from the upper table, and paste into the lower table next to the Bq/M3, then you can see what the addition of a certain amount of radioisotope would increase the Bq/M3 by.

Kenny Boy Buesller said that before Fukushima the average ocean Cesium 137 was around .5 to 1 Bq/M3.    Now he is seeing areas that are 4 to 5 Bq/kG, so call it an increase of 4.

Here is the article where he is low balling it
Professor Hiroaki Koide speaks at the Foreign Correspondents’ Club of Japan (FCCJ), Tokyo 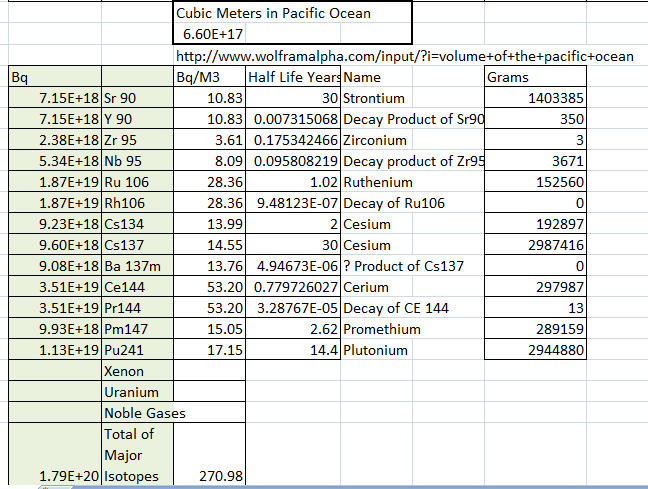