Nuclear Safety Is Not as Safe as They Pretend It Is, Emergency Diesel Genset Testing is Flawed

A ProNuke troll that frequents blogs and websites to throw out lies and it always a cheerleader for nuclear, Michael M**n made some big claims on how well they test their gensets which are the backup power source for nuclear power plants.

This means testing them support all the real loads that have to run in an emergency, including making sure that all the switchgear operates properly and automatically.

But aside from all that, M**n pointed out a link to a technical spec on Westinghouse Reactors.

The link goes to a 570 page document, which is often table formatted and not as bad to read as you would think.     However it does rely on other information that if you don't know what it means....then it might take you a long time to find it in the proper context, I will give an example below.

The tech specs presented the information on modes like this, garbledegook in my book
http://allthingsnuclear.org/nuclear-energy-activist-toolkit-5-technical-specifications/


Here is how I like to present the information: Clarity is power.

The "real tests" of making the Gensets (DGs) carry the actual emergency loads is not allowed in the above red highlighted Modes....ie.. when they are running or warm.   See screen capture below. 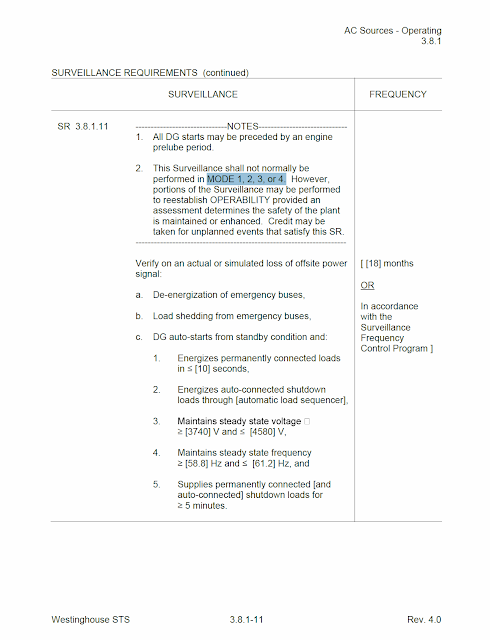 Note that the "Real Test" is only required every 18 months.    However, the "Real Test" cannot be conducted while the Nuke is running or even warm.    And they like to run these plants as long as they can to maximize profit.

In fact, one of the oldest and most dangerous plants in the USA, just coincidentally on May 9, 2015 was pushed into a record run of 683 days.     Not only is this absurd to take an old plant and force it into a marathon, it is absurd to not properly test the DG backup  systems during this Clunker Marathon.
http://www.energy-northwest.com/whoweare/news-and-info/Pages/NR-15-14-Columbia-Generating-Station-sets-longest-run-record;-begins-refueling-and-maintenance-outage.aspx

How about the Batteries? Seems they are like the DGs, they cannot be tested when the plant is running or even warm.  See below 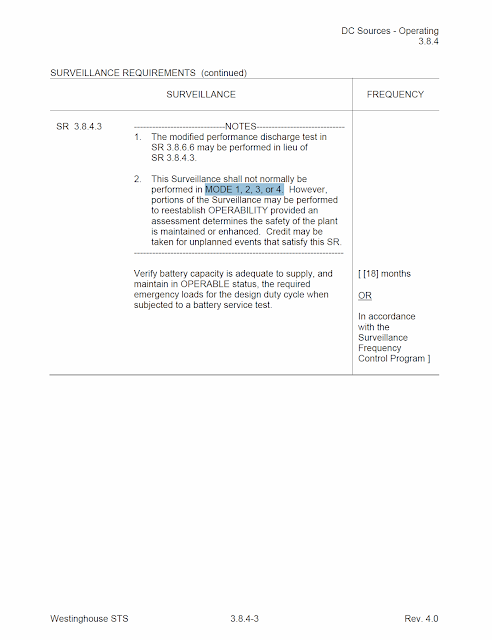