stock here, I have been banned 3 times at Atomic Insights.    What a Rabid Pro Nuclear Circle Kumbaya  they have going on over there.

For exposing the 5 lethal doses email, which occurred  perfectly timed with the massive release of neutrons during the Reactor 3 Nuclear Explosion, aka Moderated Prompt Criticality--- stock, posting at NP (Nuke Pro) was actually banned on this comment.

What a Rod Adams from below: "if you attempt to post such blatantly incorrect material without finding a credible source first, you will be banned."

Here is Rod Adams website if you can stand the grandiose precious stench.

Sorry Rod, you didn't squash anything, if fact you made it more clear how important it is to the pro nuke cartel play book to make sure the Prompt Moderated Criticality is covered up.

Here is a short ENENEWS article with the 5 lethal doses email, and only 22 comments 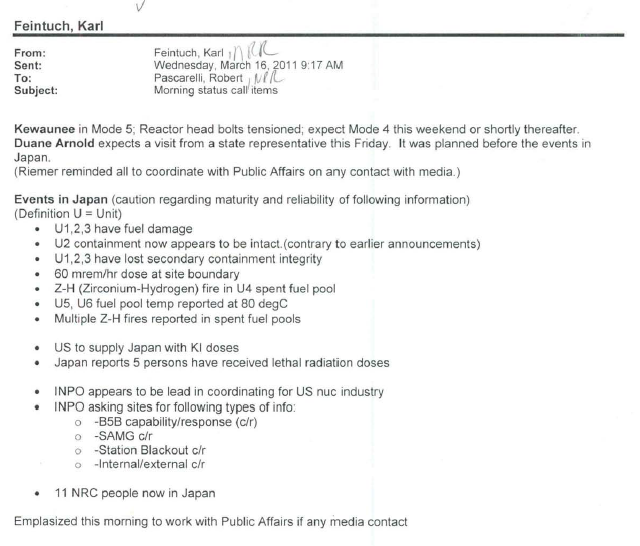 March 13, 2014 at 10:58 AM
As I said before, I find it highly unlikely that there was a misunderstanding in this matter of discussing radiation deaths.
I believe that these deaths did occur, and that the Japanese and Americans decided to cover them up. I believe that a likely moderated prompt criticality at Reactor 3 building (be it the MOX /used fuel pool or the reactor itself), resulted in a massive release of neutrons and 5 people took the hit.
Also interesting that the US MOX plant, estimated to be 2500% over budget, has been killed, and will still cost the American Taxpayers 311M just to keep in “mothball” conditions. It is also clear to me that those privy to real information do now realize the dangers of the frisky neutrons in the MOX.

March 14, 2014 at 9:15 AM
Rod,
Thank you for putting up with the anti-nuclear rants, it helps illustrate the depth of their misconceptions, sometimes we forget how little the average anti-nuke actually understands. Futile as most attempts to educate and inform them seem to be, I appreciate the effort put forth by mjd, yourself, and others to correct their gross conceptual errors.
Mike Mann

Rod Adams
March 14, 2014 at 9:26 AM
@Michael Mann
Thank you for the kind words, but I need to gently disagree with you. Many people who are opposed to nuclear energy are quite well informed about its capabilities and understand the technology pretty well. In fact, it is their understanding of what the technology is capable of doing in the hands of well-trained operators, skilled managers and empowered engineers/constructors that scares the heck out of them.
They are scared because if nuclear succeeds, their futures will be vastly different. There are some who honestly
1) dislike the human species and prefers to make as powerless as possible. There are some who envision a
2) pastoral world powered by trees, sun and wind and realize that successful nuclear energy will crowd out efforts to build that world. Finally,
3) there are some who prosper in our current hydrocarbon economy and who’s capital investments or carefully developed skills would be worth less (not worthless, mind you) in the inevitable Actinide Economy.
If I have forgotten any major groups of informed opponents, feel free to add them to the description.
Posted by Stock at 1:53 PM