This exchange really happened at Ecowatch.    The sociopathy of some of these trolls is amazing.

Note that after a few repeated attacks on the mother, then the trolls assemble into a pro-nuke "circle kumbaya" of backslapping, making fraternity boys look sophisticated.    Then at the end, a troll calls "BS" on the mother, while making his assertion that 500 years is a short time.

These "people" really do live among us. 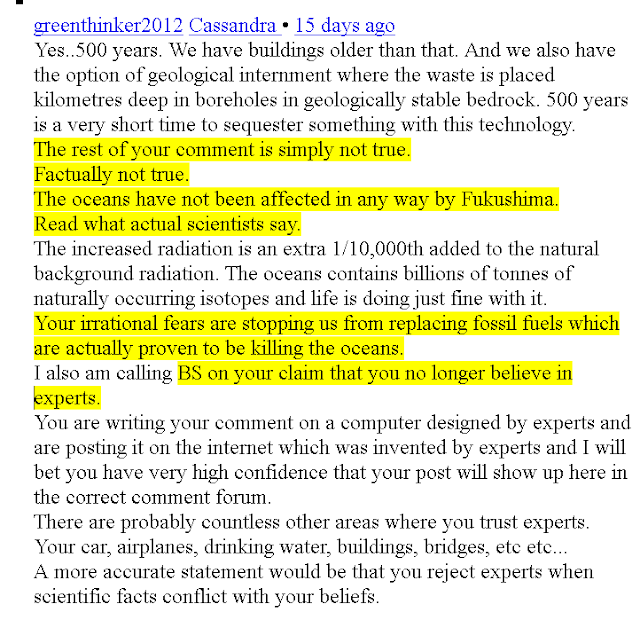 Concerned citizen, mother and stupid rat here...atoms4peace, mm and others...so, what you're saying is the greatest technological disaster in human history, multiple meltdowns that we don't have the technology to contain, that's so radioactive that robots can't even go near it, that no amount of money or political will can fix, that is going to bleed radiotoxins into the sea and atmosphere for decades if not centuries...radiotoxins that cause heart attacks, cancers, genetic anomalies, deformities, hair loss, kills nerve cells and small blood vessels, causes seizures, reduces blood counts, causes lymphoma, leukemia, thyroid cancer and infertility, nausea, bloody vomiting and stool is nothing to worry about? Please send me some of whatever industrial strength, military grade shit you are smoking, because I need it. I really do. I think and I know I'm just a stupid rat, that it is a parent's responsibility to leave a better, cleaner world for their children and thanks to people like you we are failing miserably. So from all of us stupid rats who are concerned about the environment and who don't want to suffer everything I previously mentioned, would you kindly STFU and go get another Phd or something. Fiddle much while Rome burns?