Why We Should NEVER Trust the Nuclear Industry!

Well there are literally hundreds of reasons not to trust the nuclear industry.    But I jotted out a few of the most egrarious real life examples of the last few years.

"The Hill" an unabashed mouthpiece for the Nuclear Cartel posted an article on 'Energy and the Environment': 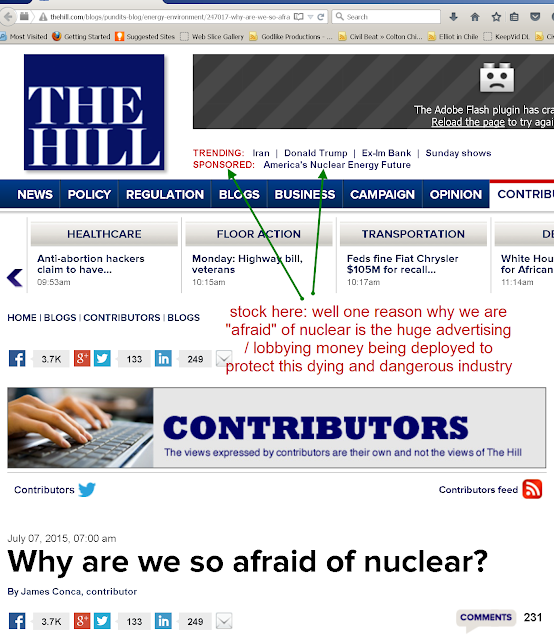 I had this response:


Obama gets on TV and assures the public that no harmful radiation would come to USA, that all we had to do was "keep watching", then he gets on a previously unscheduled plane to go to South America with his family and chosen few.

Reactor 3 blows sky high, OBVIOUSLY a Prompt Critical as later verified by EPA test data showing massive amounts of isotopes in the air. Then, "they" decide to censor any more video out of Fukushima, as Reactor 4 sustains damage almost as bad as 3.

"Speedi" plume modelling shows obvious hot zones and Japan Government directs "evacuees" to and through the hottest zones, worse even than if they had stayed put. they do not release ANY Speedi results to Japanese local officials, people, or the US Military.

In America, all they had to do to reduce the absorbed dose by 50% was to say "stay out of the rain" for a month or two. They failed even this most basic precaution.

In Hawaii, all the flies disappear just like TMI, and the sky is angry, charged. Almost daily lightning storms when Hawaii normally gets one or two lightning rounds per year. Strontium is detected in cow milk and becomes big news, then not another peep out of the Department of Health.

Now the nukists say "trust us" this next type of reactor will be safe and clean, which has never has a proven working model, as they coerce and lobby legislators to force people to pay more for nuclear energy than for solar.

Even Einstein know it was a disgrace to hand this power over the atoms to greedy humans. And Oppenheimer went on video saying "we all felt like we have destroyed the Earth"

And the nukists ponder why we fear their dangerous cartel?
----------------------------------------
Ginna busted on 4 violations, but NRC says we won't "cite" 3 of them because Ginna put them on a corrective action plan.   On the fourth violation that were caught with a civil response plan that completely ignored how to evacuate/warn those on the great lake that the plant sits on.   This was severe, but after consultation with the NRC Director they decided "exercise discretion" and not impose any fine.
stock "sheeshing" here, I guess that means fishermans's lives don't matter.   How did a violation like this go on for 40 years?!   Or if lake coverage was in a prior plan, how could it have been dropped?    It just goes to show how poorly they think about what to do in an emergency.   Its criminal really.

The inspectors also reviewed Unresolved Item 05000244/2014004-02, which was initiated
to determine whether Exelon Generation Company, LLC’s (Exelon’s) protective action
recommendation (PAR) strategy met NRC requirements. Specifically, although Ginna had
designated emergency response planning areas (ERPAs) for the land area within the 10-mile
plume exposure pathway emergency planning zone (EPZ), it had not designated ERPAs for the
portion of Lake Ontario that falls within this radius. Consequently, Exelon would not have
provided PARs for Lake Ontario to the offsite response organizations in a potential emergency
event (note that Wayne County’s and Monroe County’s Emergency Plans include actions to
evacuate Lake Ontario in the vicinity of Ginna during an emergency at an Alert level).
Following additional review of this concern, NRC staff concluded that the issue constitutes a
violation of NRC requirements, in that, contrary to Title 10 of the Code of Federal Regulations
(10 CFR) 50.47(b)(10), a range of protective actions had not been developed for the entire
plume exposure pathway EPZ for emergency workers and the public. NRC staff analyzed the
risk significance of the issue in accordance with Inspection Manual Chapter 0609, Appendix B,
“Emergency Preparedness Significance Determination Process,” and determined the issue was
of low to moderate safety significance (White/Severity Level III). However, the NRC concluded
that the cause of the violation was not reasonably within the licensee’s ability to foresee and
correct. The NRC’s assessment considered that the NRC inspection reports from the 1980’s
approved the initial Emergency Plan for Ginna and did not identify the issue, causing the
licensee to reasonably conclude that they were in compliance. Therefore, no performance
deficiency associated with the violation was identified.
As discussed in Section 2.2.4.d of the Enforcement Policy, a violation involving no performance
deficiency is considered an exception to using only the operating reactor assessment program.
Based on these facts, I have been authorized, after consultation with the Director, Office of
Enforcement, and the Regional Administrator, to exercise discretion in accordance with
Section 3.5 of the Enforcement Policy and refrain from issuing enforcement for this violation.

The report will be available online generally within 6 days.
You can find the report later by searching through this number