stock here....they are immediately pimping out that "Officials in the cities of Aztec and Farmington say they have shut down the river’s access to water treatment plants, adding that the communities had a 90-day supply of water."

ALBUQUERQUE, N.M. –  Anger was mounting Monday at the federal Environmental Protection Agency over the massive spill of millions of gallons of toxic sludge from a Colorado gold mine that has already fouled three major waterways and may be three times bigger than originally reported.
An 80-mile length of mustard-colored water -- laden with arsenic, lead, copper, aluminum and cadmium -- is working its way south toward New Mexico and Utah, following Wednesday's accidental release from the Gold King Mine, near Durango, when an EPA cleanup crew destabilized a dam of loose rock lodged in the mine. The crew was supposed to pump out and decontaminate the sludge, but instead released it into tiny Cement Creek. From there, it flowed into the Animas River and made its way into larger tributaries, including the San Juan and Colorado rivers.


Really now? 90 days?   In a desert?   Does anyone think their community has more than a 3 day supply even under rationing conditions?


High levels of arsenic can cause blindness, paralysis and cancer, while lead poisoning can create muscle and vision problems in adults and can be fatal for children.
"We're busting our tails to get that out," Environmental Protection Agency Regional Director Shaun McGrath said, as cited by AP. "We know the importance to people to have this information."
READ MORE: EPA spills 1 mln gallons mine waste, turns river in Colorado orange
The bright orange toxic sludge, which entered the Animas River in Colorado, has now crossed the state border into New Mexico and reached the city of Aztec on Friday night. Local communities in both states are not happy and have blasted the Environmental Protection Agency (EPA) for being slow in warning residents after the spill took place.
"There's not a lot we can do. We can keep people away (from the river) and keep testing. We still don't know how bad it is," San Juan County Emergency Management Director Don Cooper said, according to AP.

Thanks EPA, glad you are setting acceptable human levels for radiation for NRC promotion.

The Animas flows into the San Juan River in New Mexico, and the San Juan flows into Utah, where it joins the Colorado River in Lake Powell. There are also reports that the contaminated water is heading towards Utah. 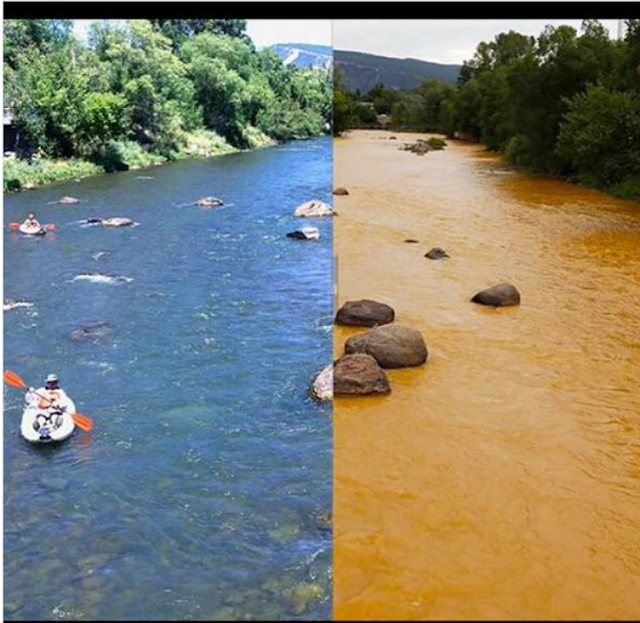