From a Group That Help Shut Down San Onofre, A Great Animation That Will Prevent the Fleecing of the Ratepayer

When you understand what went wrong and why, you will understand why the company should take the hit 100% and not get "funded" for their screw up by the rate payers.    This argument is current as of August 2015.

Illustrated above are the main flow paths for the steam, feedwater, and reactor coolant through the steam generators and reactor. Mouse over the steam generator titles to highlight those parts. Mouse or click on Main Steam Line Break to see what could happen in that scenario. Click on the U-tubes themselves to view an overlay of typical flow velocities.Forward and back buttons (triangles) in the box in the upper left go to three different screens of information and also allow you to remove most of the labels, insert or remove control rods, and cause a main steam line break.

Here are some of the things that are illustrated in the Main Steam Line Break:

*MSLB with steam shooting out
*Increased steam flow rate (hard to see but it's there)
*Entire contents of tube barrel turns to steam
*Cascade of tube ruptures with primary coolant flashing to steam as it exits the busted tubes
*Tube parts fly up and away with the highly radioactive steam
*Loose parts rise up from the bottom (again hard to see, but it's there!)

At San Onofre, the new steam generators in both Reactor Unit 2 and Unit 3 experienced enormous amounts of unexpected tube wear. But apparently only Unit 3 suffered a rhythmic type of tube vibration and damage known as fluid elastic instability. 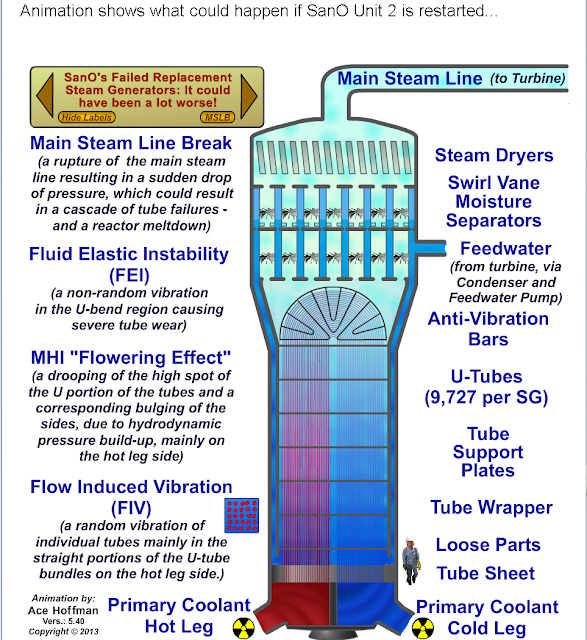 A quick background.    On a pressurized water reactor PWR, the radioactive water and steam from the reactor vessel never touches the steam turbine.    They separate the clean side from the contaminated side by use of a "steam generator" which is more direct engineering terms is a freaking large heat exchanger.

If there is a hole anywhere in the steam generator, the contaminated water can escape into the clean side.

At San Onofre, their steam generators were getting old AND they wanted to also do a power uprate.   A power uprate is like taking and old car and souping it up with nitrous and a blower for instance, and then running the hell out of it until it blows.

They extorted the local community to get the uprate approved, saying "If regulators did not approve the upgrade, the plant would close, provoking "very serious problems with the California electric grid.""

So they designed new steam generators.    They lied to the NRC and the public by stating that it was a "like for like" replacement when it was nothing of the sort, it was a major redesign.   And then they screwed up the design big time.     The pipes in the steam generator were wearing away 30 times faster than they should, and in less than 1 year, some sprang a leak, after only 1 year many pipes were 90% gone and ready to blow.

Yet the greedy operators insisted it was safe and that all would be fine if they would just run at a little lower output.    Basically they knew it wasn't going to last, but just wanted a way to  milk the profits for a few more years even though they knew they were putting the people of San Diego and every one downwind (that would be all of us) at risk of nuclear radiation contamination.

Eventually SCE decided to shut down the plant.    They did not want to spend ANOTHER $680 M for new steam generators.

Now SCE is trying to extract $5,000 Million dollars from people who will never see a single kWH from the plant.    All due to SCE's extortion, then lies, and poor design.

It's an upside down world we live in

PS they got the approval to grab $5 Billion from the ratepayers.
Posted by Stock at 3:37 PM