Kyushu Electric checked the water quality and confirmed an increase in salt content.

Each condenser has some 26,000 tubes inside that are used to pipe seawater around for cooling. Kyushu Electric suspects that holes have opened on such tubes, causing seawater to enter into the condenser. 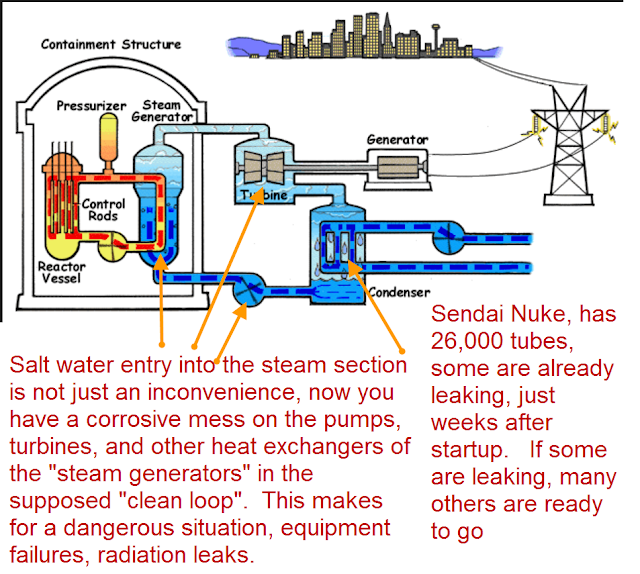 stock here---You know when you have a heat exchanger, and some of the tubes are already leaking....well 20,000 other tubes are also real close to leaking.    Think San Onofre.   But they say they can "fix it" within a week without shutting down.    Sounds odd to me.     Seems like the real story is the powers that be have decided that hell or high water (Volcanoes, Tsunamis, and Salt Leak damned) they are going to not let that plant shut down or they will lose face.

And this is very dangerous way to think.   Perhaps they have 2 sets of heat exchangers, so they can run at 50% whilst one set is completely shut down and worked on.    Regardless, this is a stop gap measure, just like at San Onofre if some tubes are already going, there are many more right behind it.  So these stories will slip out at the weeks go on.

Heat exchangers that can handle salt water are going to be stainless steel at least and ideally titanium. Industry has gotten a lot better at working with titanium in the last few decades.     So those 40 year old heat exchangers at Sendai are probably stainless steel, not at good as titanium.

But in Typical japan Times Fashion, they try to downplay the incident by stating

In Japan, similar problems have occurred about 50 times in the past, but the latest case was the first at the Sendai power plant. In the past, Kyushu Electric experienced two cases at the No. 1 reactor at its Genkai plant in Saga Prefecture in 1997 and 1999.

Classic "don't worry" it happens all the time.   So the pimps of nuke will  do anything to keep this plant running.    Including putting your life and livelihood at risk.

Now about that little active "Volcano Thing"
In another story
http://www.japantimes.co.jp/news/2015/08/21/national/caution-urged-over-mount-sakurajima-volcano-as-another-eruption-observed/#.VddVSZegs8I


For safety reasons, the city government suspended a tour bus service in Sakurajima and canceled a fireworks display and a children’s soccer tournament.

Ya der eh!? But we gots to keep that there nuke plant running, ramp it up!LOL Japan Times, a Media outlet captured by the powers that be, how sad. 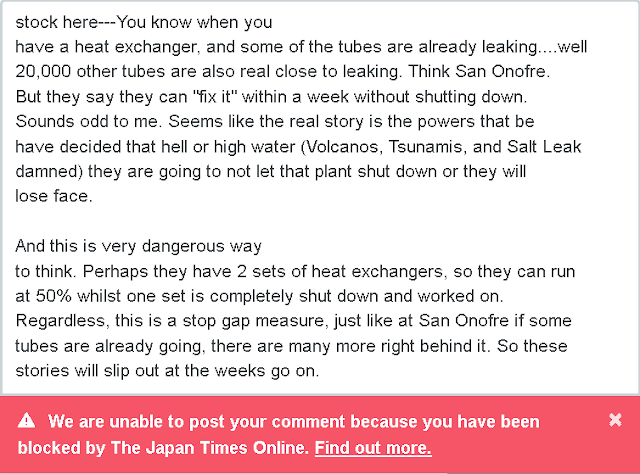 And now an interesting article from the Bulletin of the Atomic Scientists, describing the reality of why the Sendai plant was restarted.

http://thebulletin.org/why-was-sendai-nuclear-power-plant-restarted8644
Posted by Stock at 9:28 AM