Tree Huggers, Looking for Trees to Hug, A Detailed Comment from Zerohedge

I don't normally just post other people's comments in their entirety, but this one at Zerohedge was a pretty good effort for just a comment.    He is a tree guy, and he is watching them die in otherwise pristine areas.

It would be great is people could provide photos, and if you send them I will add them to the post.   But I did find some news items that confirms what he says, from 2009, I wonder where we have gone in 6 years?    I was up around 7000 feet in Bear Valley California 2 years ago and spent 4 days hiking around the woods.   They looked fine to me, not having been there before. 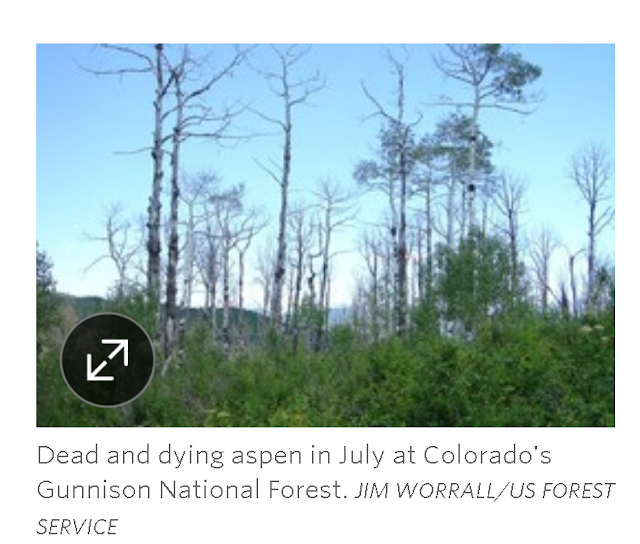 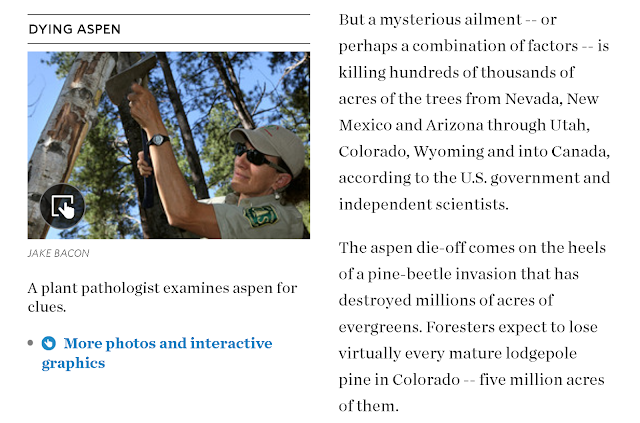 Posted on an article about Global Warming,
http://www.zerohedge.com/news/2015-08-20/july-was-warmest-month-record-noaa-reports-lists-all-signifiicant-climate-anomalies-

I guess I am a bonafide tree hugger.  I love trees.  I could not live without trees.  Everywhere I have moved (too many peregrinations) I have planted trees.  Lots of trees.  Fruit trees, fir trees, deciduous trees . . . may the gods bless all the trees.  I cannot even imagine a world without trees.  Never there was a symbol (the foundation of human communication) more apt than the Tree of Life.   Uncounted numbers of human cultures have found awe and wonder in the meaning of trees.  The Baobob, the Cypress, the mighty Oak, the towering Redwood; different peoples, different continents, different cultures, all revered trees.

So if I cannot say nor convince you that the planet is warming (whether human assisted or not), can you say it is not?   I say, perhaps we should ask a tree.

I live high in the Rocky Mountains of southern Colorado, over 9,000.  When I first hiked these mountains, 50 years ago, it was nearly impossible to find a dead or dying tree anywhere at any altitude.  Of course they had to exist, dead trees.  Nothing lives forever.  And one always did come across the lone snag perched on a rock face too far, or a lightening cleft trunk, a rotting monster that had seen too many years, or bleached carcasses washed up along a riverbank.  Of course, trees did die.  Have to die.  But the forests, whether alpine, desert, coastal, or plains always had a habit of such living vitality that they seemed to hide their own.  It's the vibrant breathing living trees that one sees and experiences.  A dead tree was a rare counterpoint.

Sometime, around the turn of the millenium that experience began to change.  When you're riding a horse on a high and narrow rocky trail at 10,000 feet up, a dead tree across your path is more than a nuisance.  It can be dangerous.  Extensive deadfall, like in a vicious windstorm can be downright scary, and make you wish you had a mule under your saddle instead.  Except that rarity suddenly became more common.  For fifteen years now I have watched the once grand and green forest canopy of these incomparable mountains whither into naked twisted matchsticks.  What began slowly, barely noticeable, turned into all encompassing devastation in the last five years. Like collapsed tinker toys all akimbo, an eeriy scene right out of Cormac McCarthy's novel, "The Road".
Everything is dying.  Humongous douglas fir, ponderosa pine, blue spruce, aspen, and down lower even juniper and pinyon.  No longer just a tree here and there, but rather entire forests are utterly dead.  You climb up to Wolf Creek Pass over 11,000' high, the finest and greatest powder snow in the lower 48, and glass the landscape for 360 degrees, and you will not find one living tree.  Millions upon millions of dead trees as far as the eye can see.  You can drive for a hundred miles north to Gunnison and all you will see are dead forests, 100% dead.

Not dying, not browning, . . . just extinguished.
My little rancho is heavily treed but interspersed with alpine meadows.  It's kind of a "Sound of Music" like atmosphere.  The beauty is breathtaking.  I smart at how lucky I am.  Never had to cut down a tree in the first twenty years, but I'm kept real busy these days, too much work for an old man.  Cutting trees.  At first it was a just couple here and there along the drive up to the house.  You call up the neighbors for free firewood.  But then it became more of a chore.  And a hazard (my granddad's ranch house was burned down twice in early California, so I know what loss is).  A lightening strike two years ago just one short canyon over the eastern horizon smoldered for two weeks before a good gust of wind came up.  Six days later 130,000 acres of some the prettiest forest in the entire country was nothing but char and ash.  So now i've timbered my 1,500th tree this week and I cannot keep up.

Once I figured out what was going on I started to pay more attention.  In northern New Mexico I've noticed entire mountainsides of pinyon, one of the hardiest species out there, go brown.  Around Flagstaff in Arizona I've watched achingly as vast expanses of the Ponderosa belt rain down dead needles all the way to the Grand Canyon fifty miles to the north.  In the deserts of central Arizona stands of Palo Verde and even groups of healthy Saguaro, have begun to shrivel.  Driving along the southern coast of California last year, where my granddad homesteaded 1898, even the ubiquitous oaks were leafless and defenseless.   Hell, then just a long ugly drive across Los Angeles on every single block, in every city and neighborhood, you'd see lined up dead and dying trees.  Alberta and British Columbia, Alaska and the Yukon . . . all the way down the spine of the North America all manner of trees right down to my property are falling like flys. Billions and billions of flys.

I asked the silviculturists at the local Forest Service office if they have any historical records, or prehistoricall data, that can put what I see in perspective.  You do not want to know what they said, other than yes, a big change is coming.  And don't give me any malarkey about it's just the beetles, or a normal cycle, or some other nonsense.   Yeah, beetles are affected by the weather.  But that's the point, isn't it?  Cycles come and go, don't they?  Yes they do, but I doubt you all are prepared for this one.  After all, dinosaurs were part of a cycle too.  This is continental ecotonal change.  Is it climate change?  Is it Anthropogenic Global Warming?  Or is it the U.N.?  Or Agenda 21? Or actually Goldman Sachs, or George Soros, or carbon credits, or the Maunder Minimum that's at fault.  Hell, I'm no genius.  I don't know what it is.

Mass Die Off Of Forests Happening Globally And Accelerating Death Rate Of Trees Is Increasing
http://agreenroad.blogspot.com/2015/06/mass-die-off-of-forests-happening.html
Posted by Stock at 12:28 AM