Potassium in the Ocean, Fixing a Reporting and Rounding Error

There is some silliness going on, and I think I know the basis.    Just because you saw something somewhere, you can't strictly trust the value of it unless you know where and how it came into being.   The below is a mistake that is being repeated quoted.

"Since then there have been added at least 1,000 Bq/m^3 of man-made Potassium-40 which is not part of natural potassium"

has been quoted several times at ENE, with the implication that man has added 1000 Bq/M3 to the ocean. 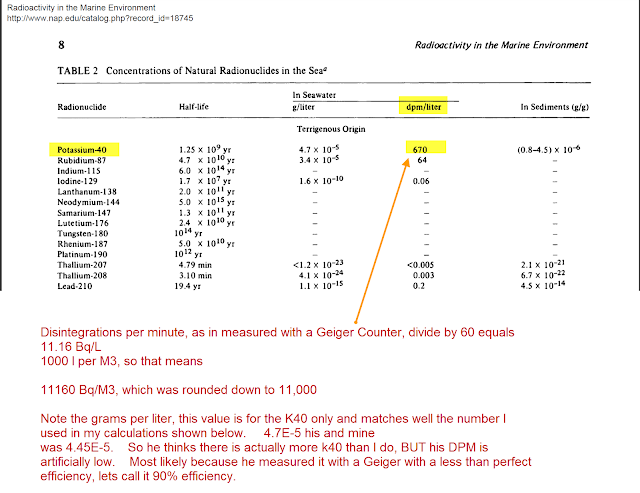 From the source document, they use an unusual convention dpm/minute.    K40 decays 90% as a beta, 10% as a gamma.   And Geiger counters are not of perfect efficiency, i.e. they don't catch every disintegration.   Wait for the punchline, but review this first.


NukePro Calcs below and shown originally on this post
http://nukeprofessional.blogspot.com/2015/08/lies-of-nuclear-nuke-propaganda.html 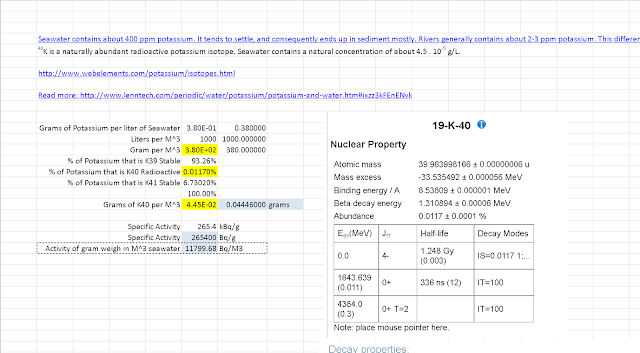 By knowing the "Specific Activity" of K-40 it is then simple to calculate the Bq/Liter, or Bq/M3


Which is used in my calculation, its one of the blue shaded values above.

So rather than using the scientific specific activity, they used a field measured dpm, and that is the error.     So if their Geiger was 93% efficient, then the 670 dpm, you would add 7% to bring the low efficiency measurement up to the real Bq/min or 717 and then divide that by 60 seconds to arrive at 11.94 Bq/L, and then convert that to M3

So all this misunderstanding and "creation of human generated K-40" was simply due to a non perfect Geiger Counter, and an author who choose to round down to 11,000 even.