Nuclear Waste Dump Rammed Down the Throats of

Trucks hauling dangerous uranium waste from Tennessee for burial in a landfill at the Nevada National Security Site will start rolling early next year despite objections from Gov. Brian Sandoval, who is powerless to stop them, federal officials said Tuesday.

Department of Energy officials insisted the strategy will be safe despite questions about the suitability of disposing potent, highly radioactive nuclear material in trenches deeper than 40 feet in the southeast part of the former Nevada Test Site. 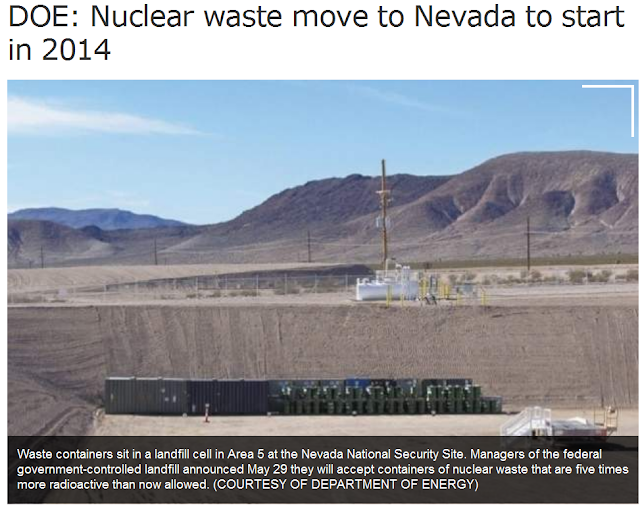 Because of the high percentage of atom-splitting bomb ingredients, the material should not be permanently buried as low-level waste in a landfill because it doesn’t meet Nuclear Regulatory Commission low-level radioactive waste guidelines, said Michael Voegele, former Yucca Mountain Project chief scientist who works as a consultant to Nye County.

Some critics have noted the DOE quietly changed its waste-acceptance criteria in May so that the Oak Ridge canisters could be disposed of as low-level waste that’s five times more radioactive than previously allowed.

The nukists that be like to call this type of disposal "trenches" which gives the mental imagery of, you know, that trench you dug in your yard so you could put a water pipe to the garden.   You know, small and harmless.

These "trenches" are nothing of the sort, they are more simply and accurately just elongated huge open pits, most don't even have a liner to protect aquifers.

From the first article below


State officials say the fire started in one of 22 covered trenches used to store low-level radioactive material like gloves or lab equipment.

Just like WIPP, always the lies about "gloves", when in fact what "low level" is called allows up to 7 curies per liter---which is a huge amount of radiation, enough to contaminate 1 Billion Costco Chickens from 1 liter (1 quart)