Sheesh! I had a long detailed response and lost it.

Simple version, Veterans today is presenting total gamma from very sensitive gamma detectors in a total of 8 ranges, this will always be higher than the CPM from a simple Geiger.

The problem comes up when people try to compare a Gamma Scint to a "Safety Table" such as the one I produced. 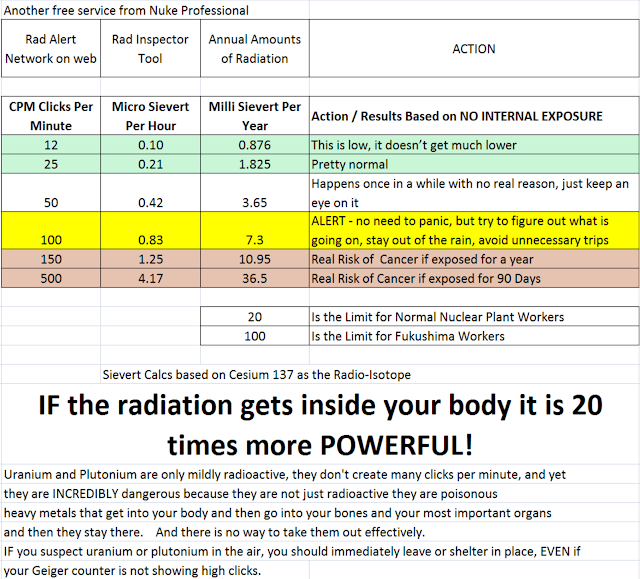 They see 100 CPM as an action level using Geiger counter clicks, and then they freak out when they see 800 CPM from a Gamma Scint.    Its like comparing jack rabbits to turtles.

It doesn't do any good to good excited over false facts or misunderstood facts, if you may.

Radiation network is private, using Geigers, the dark circle are pancakes, the others are tubes. Pancakes will always read higher than tubes in the same location.

Here is the EPA, they effed everyone over in August when they totally change where and how they provided city by city gamma and beta.

http://www2.epa.gov/radnet/radnet-near-real-time-air-monitoring-results-los-angeles-ca
I cannot find the beta on the new EPA site, I emailed them to ask, yeah good luck in getting an answer.