Why is Global Warming an Important Issue, Even If We Cannot Do Much or Anything About It?

There is an upcoming "climate convention" at a site in Paris.     At this Paris Site you will find some of the biggest criminals of the world.    And of course there will be plenty of Poly-Ticks, leeching off the working class.

I'll the comment below from The Daily Sheeple stand on it own.     But let me sum up  why I have spent so much time on this so called "Global Warming".     Because there has been no warming in 19 years, even a minor cooling.

So instead of trying to roll out a One World Government, they shifted a bit, to 2 tactics:

1) Climate change agreements on a world wide basis.    This allows them to control all energy sources.

2) So called "trade agreements".    This allows them to control everything that is bought and sold.

None of this is in your best interests.

I am a Canadian who hikes a lot in the Canadian Rockies.
Early pictures from the area vs. today show much glacier recession, at least for some glaciers, such as Bow Glacier, which is the source of the Bow River. The hiking book Classic Hikes in the Canadian Rockies shows this glacier around 1900. If you go there today, the same glacier is much, much receded.
BUT

here is the rub. The same anti-science types, who think science is determined by “consensus” (of which there is none, not even close) rather than **experimentation and hypothesis testing**,
unthinkingly look at this and make utterly unwarranted conclusions. The fact of the matter is that there was something called the Little Ice Age (LIA, also known as the Dalton Minimum) the nadir of which was around 1790 to 1830. The simple fact is that this was one of the coldest periods since the Ice Age,

and we are still emerging from this. THAT, mon ami, is why the Bow Glacier – and its sisters – have receded: we are still emerging from that LIA. This is why, according to the Archeological Survey of Canada, the tree line was 100 km. NORTH of where it is today during the MWP (Medieval Warm Period, which was preceded by the similar Roman Warm Period.

Incidentally, that emergence from the Little Ice Age has stopped over the past dozen years – there has been ZERO global warming since 1998, which now even the co-opted IPCC admits, as did Phil Jones at Hadley , the lead global warmer – until ClimateGate forced him to resign (and you’ll notice the leftists and Agenda 21 scamsters hope you’ll forget Climategate… along with Lois
LernerGate

More evidence. Kegwins’ study in Nature on marine radioistopes shows that we are, today, still BELOW the 3,000 year average.

If you google “Dr. Tim Ball+picea glauca” or go to http://drtimball.com/2012/sens...
you will find a white spruce stump on the coast Canada’s Arctic Ocean, dated about 5,000 years ago, and NOWHERE near today’s treeline. Of course, no one on the left has the intellectual honesty to address any of this. 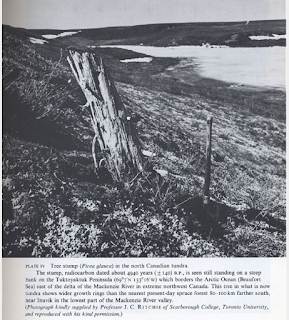 The reality is that the left, the BIG GREEN MONEY, and the Agenda 21 types want to control energy, which allows them to control everything that touches, which is… well, everything
Posted by Stock at 2:17 PM