I don't have time to provide all the backup for my assertation in this post, but it is findable via searchingthis lbog, searching at ENENEWS, and general Google search.

Bottom line: as the dying and desperate, yet dangerous and well funded nuclear industry cannot compete with modern energy sources, it has corrupted it's captured agencies to try to raise the radiation levels that they can blast the general public with by 100 times more.

Not joking.  It is beyond comprehension.   These are sick and desperate people.

Some of the pro-nukers I chat with admit that they don't believe that 100 time more would be anything but very dangerous, BUT they also think it won't be opened up that high and maybe just relaxed by double.

That is very dangerous thinking, you have no idea the result once an absurdity like this enters committee and a vote.   Its a crapshoot at that point.

(1) Comment to the EPA regarding raising radiation levels:
email hanlon.edward@epa.gov
Also they are having a meeting Nov 9 in DC to discuss radiation protection standards.


(2) Comment to the NRC regarding raising radiation levels:
http://www.regulations.gov/?utm_campaign=comment%20publication%20notification%20email&utm_source=federalregister.gov&utm_medium=email#!submitComment;D=NRC-2015-0057-0086

Funny how in 2014 the EPA comments on Nuclear Power Radiation Standards received 33, 960 comments, quite a lot.

The  item 2 above only has a few hundred comments, how lame is that. 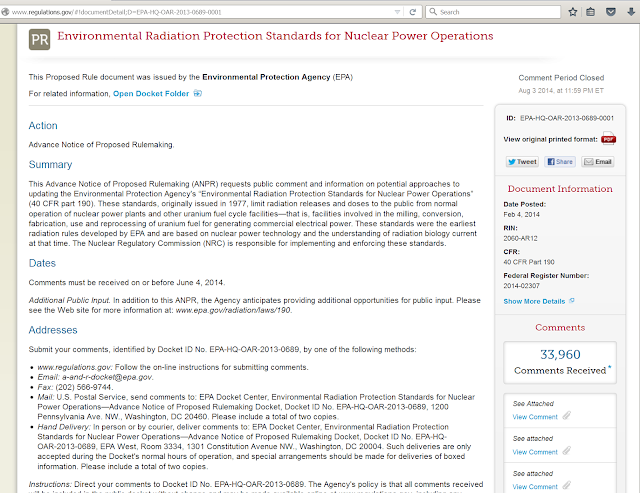