stock here....that picture looked kind of familiar, I pulled one out from my archive

I will add the pictures seperately, I realize in the above compiled pictures, it is hard to obviously see the photoshopping.

This picture taken this week over San Francisco.    Big Gov did another one by LA too.    These are Intercontinental Balistic Missiles capable of carrying nuclear bombs.     They gave no notice and didn't explain even after the sightings by millions.

Methinks it is mostly saber rattling at Russia, and to start getting USA people scared of Russia and nuclear bombs, so that USA had take a harder stance with Russia without the little people getting upset over MORE war mongering.     Nobel peace prize, eh? 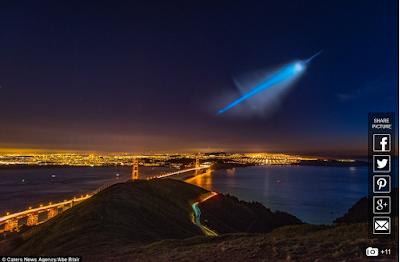