The EPA standing up for Citizens Health, Slaps Back at the Absurd NRC Proposal to Increase Our Radiation 100 Times

Hotel Californium!    Sucking me in again with the EPA jousting the NRC. 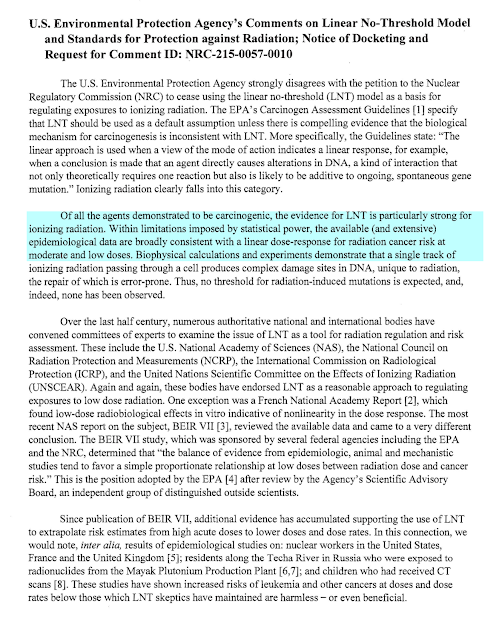 Even though LNT is not "fact" is not "correct" it helps set a reasonably low safety measure for radiation exposure.    So it doesn't have to be perfect.

For those who are confused by LNT, here it is in a nutshell.    They took health results from the 2 nuclear bombs dropped on Japan and then extrapolated a line down to the zero Y and zero X axis.   and then far far away from the huge exposures of the atom bombs, they used the atom bomb data to set safety levels for much lower levels of radiation.    So it's actually a bit of stretch of logic at best.    But it set a level that it "pretty OK".

By NRC wanting to throw out LNT, there is a basis of logic for that.   But the insanity comes when they want to replace LNT, with Hormesis "Radiation is good for you, up to 100 times the radiation allowed now".   That is 100mSv.   I think even the nuke cartel does not believe this would be wise, but that this is a ploy to say "lets make a compromise, and make 20mSv per year the new standard".

Nuclear plants are dying like flies, and worldwide, they make about $400B in profit for their owners, so they can throw a lot of money at trying to slow the death rate of the existing plants, whilst getting Obama to throw in money for the "next generation" research.

So yes, keeping LNT is much better than throwing LNT out and replacing it with 100mSv hormesis.    In the perfect world we would replace LNT with something even stricter, a "supra linear" model.   That won't make sense to most people until you see it in a chart form.

But basically, repeated long term attacks by small levels of radiation, especially man made radiation, can be much more damaging than 1 large attack that doesn't cause immediate permanent damage.

Consider the example of a person walking out there apartment door and getting mugged, beaten to the ground, kicked, but not permanently damaged.    Then that person experiences no bad attacks for 5 years, instead committing thenselves to physical training and healthy probiotic eating.

Now compare that to a person who walks out the door of their apartment and a group of bullies give them a solid hit that bruises them but doesn't knock them to teh ground.   And the next day they strike again, sometime hitting the same bruised areas.   This goes on for 5 years.

Who do you think is in better shape after 5 years?

I think it is a fitting analogy.

And it should also be obvious what happens if they throw a banana at you every morning, you  take the banana, make a smoothie and end up healthier.   OK I had to throw that in there for Codeshutdown, LOL.

http://www.greenmedinfo.com/page/why-there-no-safe-level-radiation-fukushima
Posted by Stock at 9:43 AM