stock here: the TPP [Tran-Pacific Partnership] will have incredible negative effects to the average person or small to medium business.

2 items I wish to point out---[and plenty of other awful things].

1) the TPP can be used to force USA to import radiation contaminated foods, without even knowing that we are doing so.

2) The TPP will reduce the ability of existing health programs to try to make drug costs go down.

The only good way to search the whole TPP is through this tool that was nicely created by The Washington Post.    You have to scroll down a bit to get to the search box.   Note that "Radiation" is not even mentioned in the TPP although Food is extensively mentioned, as well as Fish. 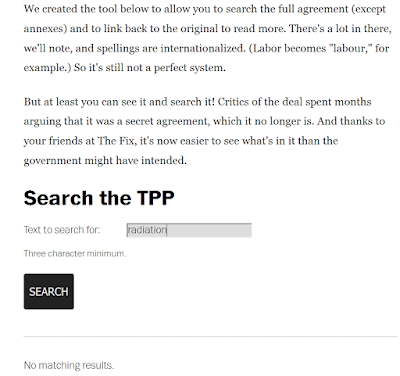 
Under the TPP, corporations will be able to appeal the laws of nations to 3-member panels of arbitrators, with one arbitrator chosen by them and a second agreed to by both them and the nation whose laws they are seeking to overturn. See the chapter on “investment,” for how this works. It means that a foreign oil or mining corporation, for example, could overrule a U.S. environmental law by appealing to 2 out of 3 corporate lawyers on a secret panel.

The TPP puts a large number of disastrous policies in place without waiting for corporate arbitration. For example, the U.S. Department of Energy would be required to approve any applications to export liquefied “natural” gas — meaning more fracking, more destruction of the earth’s climate, more profits for those who’ve been writing this treaty in secret for years, but not more sustainability, environmental protection, or even U.S. energy “independence.”

The TPP would lower U.S. tariffs to zero while keeping Vietnam’s, for example, in place, which — along with no meaningful or enforceable labor standards — will encourage U.S. corporations to move even more jobs abroad to low-wage and even slave labor. The Obama Administration reported on slavery in Malaysia, then altered Malaysia’s ranking in order to allow its participation in the TPP. This race to the bottom would lower U.S. wages without encouraging better practices abroad.

“According to an initial analysis published in the Wall Street Journal, the U.S. market access concessions alone will increase the U.S. trade deficit in manufactured goods and autos and auto parts by more than $55 billion dollars resulting in the loss of more than 330,000 jobs.” —Public Citizen
The TPP could require the United States to import food that doesn’t meet U.S. safety standards. Any U.S. food safety rule on pesticides, labeling, or additives that is higher than international standards could be challenged as an “illegal trade barrier.” [stock here ----radiation and heavy metals!]

The TPP would threaten provisions included in Medicare, Medicaid, and veterans’ health programs to make medicines more affordable, as well as domestic patent and drug-pricing laws.

The TPP is broader and more encompassing than NAFTA, and weakens rather than strengthening NAFTA’s weak protections for labor and the environment. Barack Obama campaigned on substantially reforming NAFTA in those regards. Instead, he’s now proposing the worst of NAFTA on steroids.
Posted by Stock at 11:33 AM