Greenhouse Gas? It is a heat blocker, a moderator, or a "greenhouse"

1.0 Introduction: What on Earth Is the "Greenhouse Effect"?

Confusion and Lack of Thermodynamic Definition

Although the "Greenhouse Effect" is of crucial importance to modern climatology and is the putative cornerstone of the Anthropogenic Global Warming hypothesis, it lacks clear thermodynamic definition. This forecasts the likelihood that the name is misapplied. Even general descriptions of the "Greenhouse Effect" may seem confused when compared to one another. In the first year university geology text by Press & Siever (1982, p. 312) we read:


"The atmosphere is relatively transparent to the incoming visible rays of the Sun. Much of that radiation is absorbed at the Earth's surface and then reemitted as infrared, invisible long-wave rays that radiate back away from the surface (Fig. 12-14). The atmosphere, however, is relatively opaque and impermeable to infrared rays because of the combined effect of clouds and carbon dioxide, which strongly absorbs the radiation instead of allowing it to escape into space. This absorbed radiation heats the atmosphere, which radiates heat back to the Earth's surface. This is called the 'greenhouse effect' by analogy to the warming of greenhouses, whose glass is the barrier to heat loss."

This explanation is fundamentally confusing because it is seemingly contradictory, as impermeable 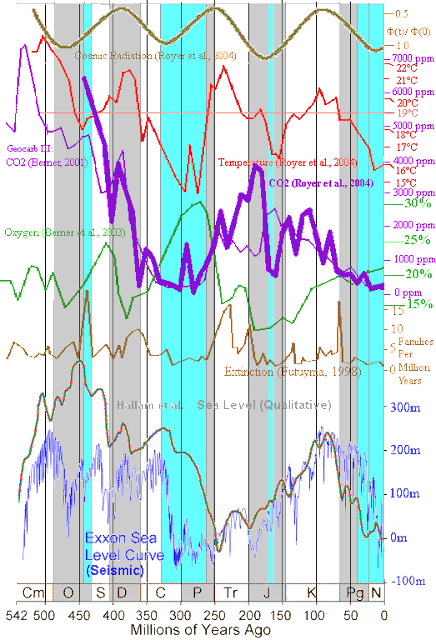 materials cannot absorb on the minute to minute timescale that applies to the "Greenhouse Effect", even if such an impermeable material has a very high fluid storage capacity or porosity. According to Press & Siever's explanation above, the atmosphere is relatively impermeable due to the presence of clouds and carbon dioxide, which are part of the atmosphere. How then, can the part of the atmosphere that makes it impermeable to infrared, simultaneously facilitate infrared absorption? Moreover, the idea of thermal permeability is a product of the 19th century pseudoscientific notion that heat was actually a fluid (called "caloric"). This led to a great deal of misunderstanding amongst the scientifically illiterate when it came to the findings of Fourier (e.g. Kelland, 1837). We may compare this description of the "Greenhouse Effect" with that of Whitaker (2007, pp. 17-18), which lacks the misplaced 19th century usage:


"The Moon is another excellent example of what happens with no greenhouse effect. During the lunar day, average surface temperatures reach 107ºC, while the lunar night sees temperatures drop from boiling point to 153 degrees below zero. No greenhouse gases mean there's no way to smooth out temperatures on the moon. On Earth, greenhouse gases filter some of the sunlight hitting the surface and reflect some of the heat back out into space, meaning the days are cooler, but conversely the gases insulate the planet at night, preventing a lot of the heat from escaping."

In Wishart's explanation above, the Greenhouse Effect" is no longer a warming mechanism but a thermal buffer that moderates the extremes of temperature.
Posted by Stock at 6:07 PM