Hawaii Once a Proud Leader in Solar, Now The Poster Child For Corrupt Utilities and Government / Regulators

stock here---the title of this article is absurd, they pretend that the dysfunctional utility HECO killing customer owned solar is somehow a good thing......


How Hawaii Has Empowered Energy Storage and Forever Changed the U.S. Solar Industry


Over the past two months, the Hawaii Public Utility Commission (HPUC), which regulates the utilities in Hawaii, took its first steps to resolve this fight by introducing a set of regulations (Phase 1 Decision and Order, Docket No. 2014-012) that could drastically change the energy incentive structure in the state. In doing so, they are laying the foundation for a new economic model of how solar and energy storage will work for decades to come.
In this post, I will outline how this first set of regulations have the potential to make storage economically viable, addresses key challenges with the current solar business model, and set up the industry for a brighter tomorrow.

stock here: what is really sad is that industry suppliers, being the most likely "source" to fight corrupt utilities and regulators, have actually become mouth pieces for the corruption.     Here is how it works....the suppliers have realized that they are affected by regulations, but that they will do fine under any scenario other than a complete stoppage of solar.

So they go out of their way to try to keep selling solar, even when placed under an irrational rate structure, such as the one recently conjured up by Hawaiian Electric (HECO) and giving to the Public Utilities Commission who then "forced HECO to implement the new plan".

In the article they lie about the cost of storage (batteries) and then go on to pretend that small customer owned battery storage is going to be a good thing.   And they use this further lie to promote the new rate structures. 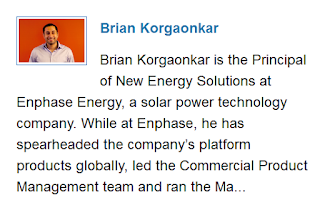 This is the new reality---solar suppliers will no longer be the monied interest with enough neutrality to keep corruption in check, but actually become a supporting voice of the corruption.

This type of vast lie out of the gate invalidates all further arguments.

What has been done is criminal.

Could it be because it has a smaller population?

I suspect that the US is more technologically advanced than Costa Rica.

Or perhaps it's big energy using disinformation and political influence to slow the spread of renewables which threaten their business model?

It's about time businesses study the economics of creative destruction, one of the drivers of capitalism, which says a new product coming to market at a lower price and better quality will drive older businesses under if they can't compete.

------------------------------------------------------------------------------------------ This guy talks about Fukushima radiation, and also how Solar is being attacked, and how Global Warming is a farce simply meant to transfer wealth to those who already have the wealth. -------------- Streamed live on Dec 3, 2015 Greetings Unsettled Souls, 'Tis Sam I Be Di Gangi of The media Speaks (dot com) with this months MASSIVE Fukushima update via: Fukushima is looking at a MILLION cancer DEATHS due to the meltdown(!), melt out, and melt through's; Fukushima CANCER RADIATED FISH is being FED TO YOU; INTERNATIONAL LAW FORBIDS the poisoning of the sea that TEPCO is doing; Solar power is being HELD DOWN by big energy companies; Is there a connection between ISIS and so called "global warming"?; Did the US launch a missile that may be both nuclear AND invisible under current detection methods?; ....NEVER BEFORE DONE ON THE SHOW...WARNING NR17 MEGA RATED R due to VULGAR LANGUAGE! The dumbdee of the day is both AGAIN debunking global warming AND putting it into the words that even a lay person will understand....HOLD ON. Sam
Posted by Stock at 3:19 PM