Finally, a space weather site that provides data on Radiation at Altitude

Some of you may remember my citizen scientist efforts at Geiger data gathering at altitude on airplane flights.    What was most interesting was that by holding the Geiger against the leg, you can block half the beta and all the alpha. 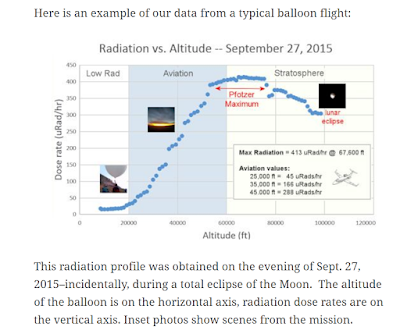 Radiation levels peak at the entrance to the stratosphere in a broad region called the "Pfotzer Maximum." This peak is named after physicist George Pfotzer who discovered it using balloons and Geiger tubes in the 1930s. Radiation levels there are more than 80x sea level.

Note that the bottom of the Pfotzer Maximim is near 55,000 ft. This means that some high-flying aircraft are not far from the zone of maximum radiation. Indeed, according to the Oct 22th measurements, a plane flying at 45,000 feet is exposed to 2.79 uSv/hr. At that rate, a passenger would absorb about one dental X-ray's worth of radiation in about 5 hours.

The radiation sensors onboard our helium balloons detect X-rays and gamma-rays in the energy range 10 keV to 20 MeV. These energies span the range of medical X-ray machines and airport security scanners.
---------------------------
stock here--as expected, flying at night is not protection from Cosmic, because it comes mainly from deep space, all around us.   In all directions

Space Weather is good stuff.    It explains a lot of things that happen on the Earth, especially things that lying scientists attribute to other causes.    interested?   Dive in, if I told you the truth, you wouldn't believe me.