Although Bob Nichols does an important service in bringing to light many of the radiation tragedies playing out in real time now, set up by 70 years of arrogance, shielding from the public eye, and just plain incompetence, and the ubiquitous  excuse of "we are at war, we have to save lives, we are in a cold war" that makes any irresponsible act seem permissible.

That said Mr. Nichols does a disservice to the community and the message and activism by a broad mis-truth of comparing apples to oranges.    And here it is quickly and succinctly.

So no, we are not living in the USA in cities that have 200 times normal radiation.    This is not constructive, damages the message, gets fringe activists talking about the wrong thing and discredits the anti-radiation movement.

Nichols knows the difference between Beta and Gamma, between Gamma Scintillators and Geiger Counters.   Maybe he doesn't know enough.   Maybe he just wants to get people excited and talking to their elected representatives about radiation.   Maybe he just wants more clicks to his site.    I will take him to task on this in the near future, directly.    It hurts the anti-radiation anti-nuclear movement.

As the nuclear industry spend over $1.4B per year to send out propaganda to promote itself and distribute lies about how good it is....we can't afford to damage our own grassroots movement.

Here is a previous review I did on this "Chicken Little" or the Bob that Cried Wolf too often. 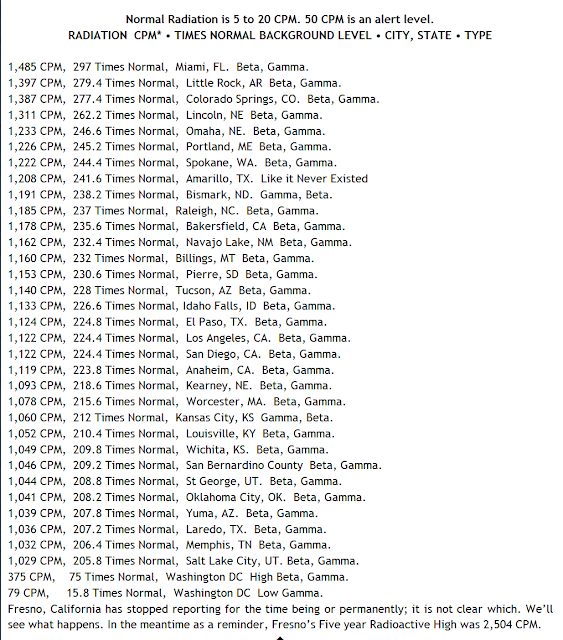 Another guy who has done some good research in the past (which I do not always agree with, but often do), is Ian Goddard.


Please review his video on the LNT radiation model, a very important (although flawed in a fundamental way, which does not incidentally take away from it's usefulness in protecting your safety)

Since the Fukushima nuclear disaster in 2011, the focus of nuclear advocacy has been to prevent private property owners from holding nuclear utilities liable for damages incurred by future nuclear disasters. Toward that goal, nuclear advocates have set their sights on the linear no-threshold (LNT) risk model.

According to the LNT, even the lowest doses of radiation increase risk of cancer. So the LNT informs the rationale for nuclear liability from disasters that spread radioactive fallout across the landscape.

In 2006, the U.S. National Academy of Sciences endorsed the LNT risk model in their BEIR VII report. But has radiation epidemiology since 2006 continued to support BEIR VII? That was the question I set out to answer at the National Library of Medicine, and what I found is presented in this video: