I was reviewing the 300 page report the Fire Marshal sent me, re Beatty Nuke Dump Explosion

But when they ran some gamma scans they didn't detect any Alpha radiation, imagine that?
They also detected strontium in the material analysis

For now I will publish in draft, some excerpts from the report.

From ENENEWS---someone who knows people from Beatty, NV

January 4, 2016 at 5:10 pm · Reply
I should have known a bit more would come to light.
So our very close friends we dinner out with, will not be amused at all.
Born/raised in Beatty,NV.
She has thyroid, he has MS problems. In their late 30's.
3 of the 4 parents are gone.
Their kids have some troubles, behavior, they often say things aren't firing on all cylinders.
Downwinders we all are, forever. 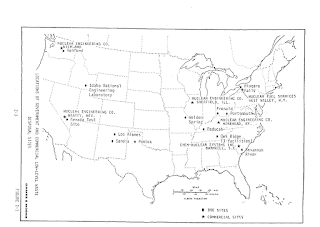 stock here--so they basically mixed everything together in the same "trench", keep in mind these trenches were not like what you might envision when thinking about a trench.   They were 70 feet wide and hundreds of feet long, sometimes 70 feet deep, and then they fill them with waste up to the last 3 feet, and then a dirt crown on top (to shed water away from the waste, seriously, that was their plan from the get-go). 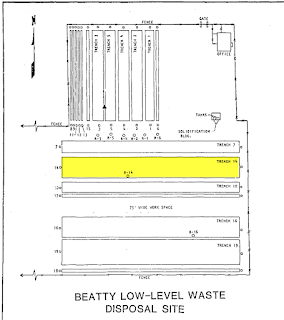 This includes plutonium and sodium metal....all thrown together in what would become a massive cesspool of nastiness.

Trench 14 was one of the biggest "trenches" at Beatty, some of these "trenches" would stay open for years as they filled them, exposing them to damage from the elements.    Exposing wildlife and insects to very hazardous chemical and radiation.

Beatty was busted several times, accepting full on tanks of liquid waste to dump directly above the towns aquifer. 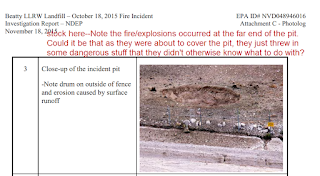 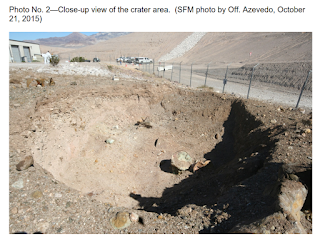 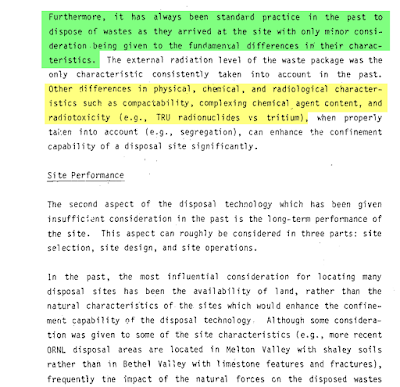 We see down below, how much "special" stuff was put into Beatty, in particular, trench 14 received some of the most of the "precious".   Trench 14 is the one that blew up and burned.

They admit that they directly dumped plutonium into Beatty, 1975 was the biggest amount, enough to make 3 nuclear bombs, and some sources show 1975 as being the year that trench 14 was in use. 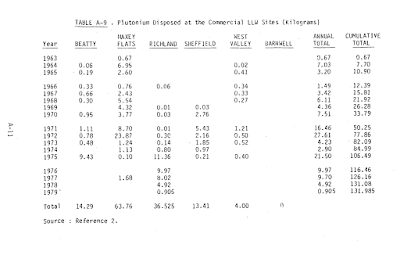 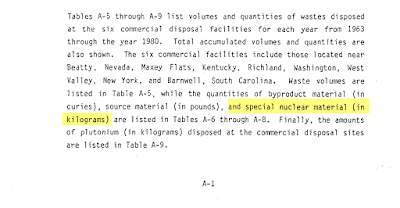 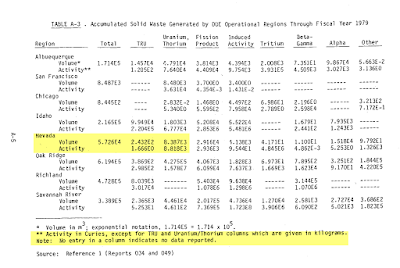 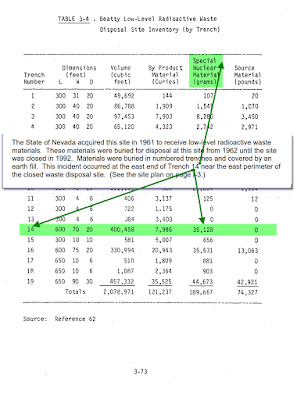 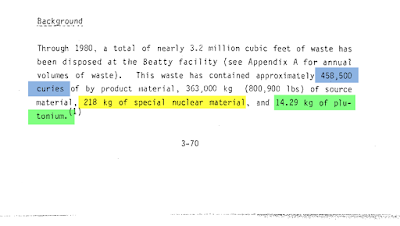 The operator of Beatty later stated that 21 kG of Plutonium had been placed into Beatty, not 14 as per the above post.    So which is it guys?     A difference of 7kG is enough to make 2 nuclear bombs.

Strontium detected in below report. 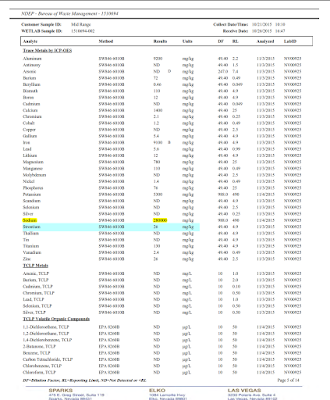 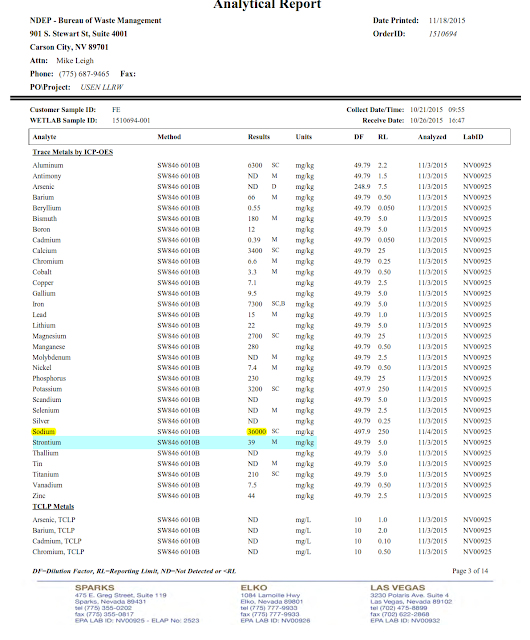 The exact problem that happened at Beatty in 2015 was a well known and predicable and predicted problem.   Yet there was no action plan to mitigate the chances.

And then amazingly, this report, based on nothing, draws the conclusion that "It is unlikely, however, that significant off-site releases will occur." 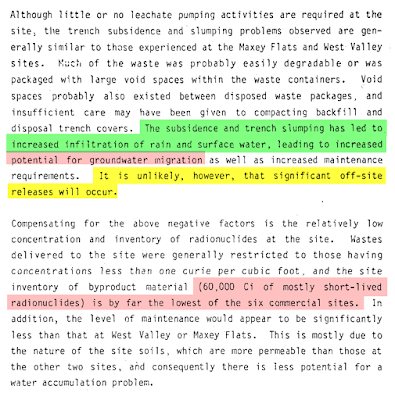 They found Uranium, but threw out the test.    They commented on 5 other isotopes and were completely silent on Plutonium. 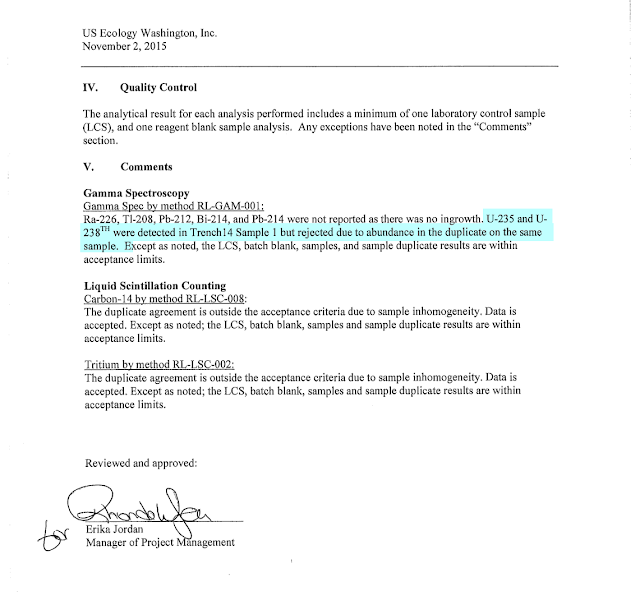 Yes, they were breaking the rules and laws all the time, and the worst that ever happened to the operator was a $10,000 fine. 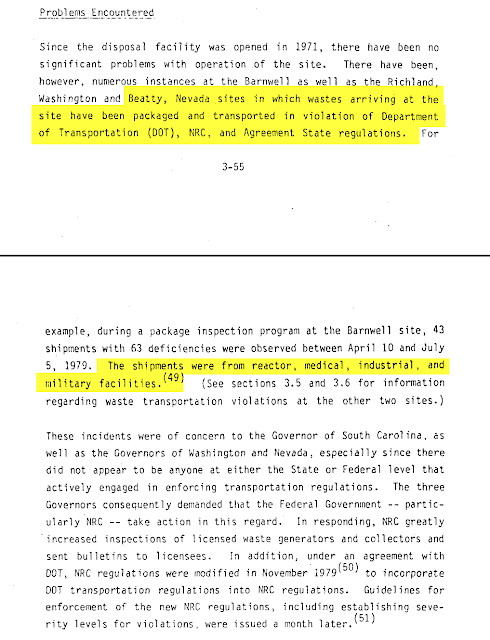