Why Have the Muslims Been Allowed To Invade The European "Union" 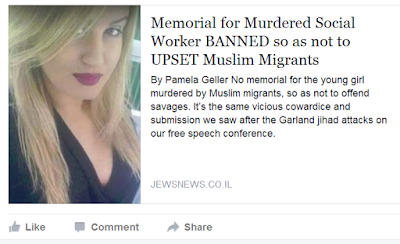 I posted a question on a blog about "why is the forced acceptance of large amounts of Muslims into European countries happening, along with the attempted roll out of the NWO"

It didn't make any sense to me.   Aren't they kind of contrary in purpose?

Someone answered with their own comment—
1) Break down National Identity
What do you think?

Shimon: “That’s right Jake. So what we’re told, I’m told by three sources now that the NYPD and the FBI are investigating this as a terrorism incident. Our understanding is that, according to witnesses … they’re telling police that they heard the driver saying, yelling, ‘Allahu Akbar, Allahu Akbar,’ during this incident.”
And Tapper’s response?
“The Arabic chant, Allahu Akbar, God is great, sometimes is said under the most beautiful of circumstance and too often, we hear it being said in moments like this,” he said.


Oh please, make it stop.
It’s bad enough the leftists of the country can’t take even the most mundane and common sense of national security protections to stave off radical Islam terror attacks — like clamping the borders, for example.

The totally incredible thing is that almost no one on the entire internet has yet realized that there is nothing remotely accidental about this Muslim flooding of Europe.

It was not - as everyone, so sadly, seems to think - a 'mistake' by Merkel, at all. Her invitation to the entire Middle East (and far beyond) to pour into Europe was a calculated, totally deliberate dramatic ramping-up of the EU's plan to pour muslim into all EU countries formulated by Peter Sutherland when he was EU Commissioner - which was adopted by the EU's Polituro, the 'EU Commission', as policy.

The objective of their plan was to pour such vast numbers of muslims (preferably, because they don't integrate) into all European countries to break down national identity - which is the greatest threat to the EU, and the single and only obstacle which has frustrated them in achieving a Single European state.

This flooding of Europe with muslims has been going on since Blair's time - in vast numbers, as anyone living in any of the main EU countries can confirm for themselves. In the UK, this was initiated by Blair, and has been continued in similar volumes (hundreds of thousands every year) by Cameron - another EU stooge.

Europeans! If you don't overthrow the EU / German conspiracy which rules all main EU countries, you will have no Europe left.

And the other piece of the puzzle....
For the NWO they need to assemble countries into Blocks, with are then easier to control and integrate. So if Europe breaks up, a critical block is gone. So even though the introduction of the Muslim is quite risky, their future of world domination is at risk.

On similar note, why do you think Obama is president? Same reason, one of his main jobs was to marginalize the white christian middle class, and he has done so very effectively. His other overall task was to neuter the Bill of Rights.

They NWO cannot capture the USA whilst it had a strong white christian middle class because they had the wherewithal and the moral fortitude to stand up against the NWO.

2) Jews (the NWO Bilderbergs, Soros Kissinger and their ilk) pit the Muslims against the Christians to weaken both.

3) Make all Euro countries suck, not just destroy nationalist feelings, but just create a "it sucks everywhere" so why not be part of it, no benefit to be sovereign.
Posted by Stock at 5:26 PM