Earthquake Alert -- "The Big One With Tsunami" Pacific Region

About a month back we started covering the possibility of "The Big One" hitting California, maybe the Upper West Coast USA, and some chance of a Yellowstone Eruption.

There was some buoy data that indicated a large drop in ocean floor levels.  There was also some claim of a massive CO release on West Coast USA that is scientifically proven to at least sometimes proceed a big quake.   It took a few hours of work to debunk that one, but you can see the details below.

And there were periods of intense quietness in terms of number of earthquakes per day.

So that means that something is "stuck" and there is energy building up for a possible large Earthquake (EQ).

We have also seen some unusual activity, such as numerous over 5 EQ at the mid Atlantic ridge, numerous small quakes near the Volcano on Hawaii.    Indonesia has also had an extremely quiet 2 months, but lately quite  few 5.0 range.   That is "good" as it relieves stress, but keep in mind, prior to the Great Japan earthquake they had a swarm of 5.0 range EQ.    And Japan is certainly not "off the hook" as they restart nuclear plants that have been sitting for 5 years, have been poorly inspected, and having emergency shutdowns.

NEW INFORMATION: Apparently the CO levels were not real and were caused by a change in 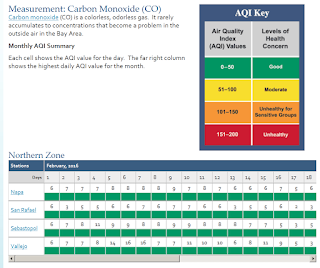 some sensors and calculation method, so they say.


2 hours after I wrote a letter to a specific NASA individual, they put out an update----kind of LOL
https://earthdata.nasa.gov/terra-status-update-1-mar-2016

News Date: 1 March 2016
Terra MODIS was transitioned to science mode on February 24, 2016 (day 055) after being in safe mode since February 18, 2016 (day 049).
Though the data is currently being acquired and processed at MODAPS and Near Real-Time (NRT), users are advised to exercise caution in using the products in any application. Products from period 055 – 058 might have been severely degraded due to abnormal operating temperature for the SWIR (Short-wave infrared) and LWIR (Long-wave infrared) Focal Plane Assembly (FPA) hence products may not be usable in any application. Though the focal plane temperatures have reached the stable operating value as of day 060, some products may still have been impacted by the increased noise in some of the detectors in the thermal bands.
Users are requested to exercise caution in using the products until further notice.

Here is an animated GIF showing the "dilution"


OLD INFORMATION---Now any even "weirder" but scary correlation with an earlier major earthquake.    CO levels shown at massive levels on whole West Coast.
And unusual EQs at Hawaii, Yellowstone, and the mid Atlantic Ridge

So we STILL THINK chances of a big EQ are elevated even if the CO was an amazing coincidence false alarm.   Amazing coincidences do indeed happen, in numbers beyond what statistics would deem "reasonable". 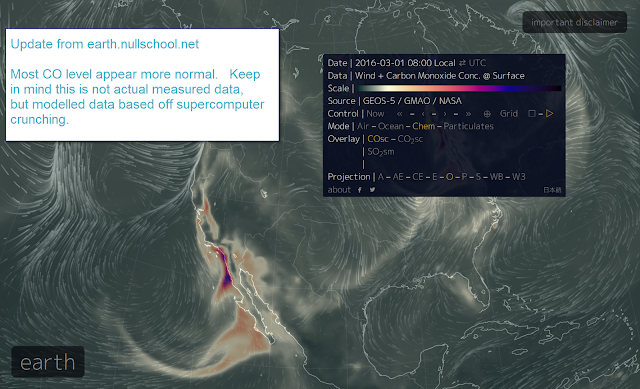 From a Nature India Article, more details than just the Abstract

Earth emits a burst of carbon monoxide (CO) a few days before an earthquake, according to geophysicist Ramesh Singh. He and co-workers from France and the United States report that this gas could be used as one of the precursor signals for an earthquake early warning system.
The scientists used data from an American satellite and analysed changes in carbon monoxide at different altitudes. "The carbon monoxide shows enhancement in concentration a few days prior to the earthquake," Singh said.
Singh, who was formerly with the Indian Institute of Technology in Kanpur, is currently in the physics department of Chapman University in California, USA. The project was funded by the Indo-French Centre for the Promotion of Advanced Research in New Delhi.
The researchers discovered the connection between CO emission and earthquake by analysing satellite remote sensing data collected around the time when a 7.6 magnitude earthquake shook Gujarat in western India nine years ago killing about 20,000 people and rendering thousands homeless.
Singh said that CO levels were taken by an instrument onboard NASA's Terra satellite — launched in 2009 — circling the earth in a polar orbit at a height of 705 km. The instrument measures CO concentrations at different heights and also computes the total amount of the gas in a vertical column of air above the earth surface.
Analysis of the satellite data showed a large peak in CO concentrations during January 19 and 20 — a week before the main earthquake event. On January 19, the total CO in the vertical column was also higher than usual. After the 26 January earthquake the concentration of the gas dropped.
According to the scientists, CO gas is forced out of the earth due to the build up of stress prior to the earthquake "influencing the hydrological regime around the epicentre."
Singh said an anomalous increase in land surface temperature a few days prior to Gujarat earthquake — as inferred from the data of NASA's other satellite MODIS — is also related to the CO emission. "The increase of column CO and concentrations of CO may have enhanced the land surface temperature," he said.
"The anomalous changes in CO concentrations prior to the main earthquake event and enhancement of temperature of the earth surface observed from MODIS satellite data give an indication of coupling between land and atmosphere," the scientists report. Singh said observation by other researchers of a sudden increase in water vapour in the atmosphere and changes in the ionosphere a few days prior to the Gujarat earthquake all seem to be connected.
According to the report, all these observations including the latest discovery of CO emission show the existence of a 'strong coupling' between land-atmosphere-ionosphere. "The integration of all these parameters in a seismically active region therefore looks a potential approach to understand earthquake processes and may provide reliable information about an impending earthquake," the researchers conclude. 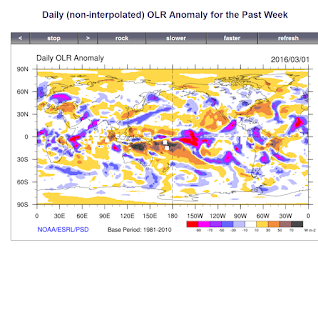 http://www.arb.ca.gov/aqmis2/display.php?param=CO&units=007&statistic=DMAX&year=2016&mon=2&day=29&county_name=--COUNTY--&basin=--AIR+BASIN--&latitude=C-Central&report=7DAYℴ=basin%2Ccounty_name%2Cs.name&submit=Retrieve+Data&ptype=aqd
Posted by Stock at 1:56 PM