Dear Readers, I made a cute cartoon on a picture of bears talking about why they won't eat that whale. 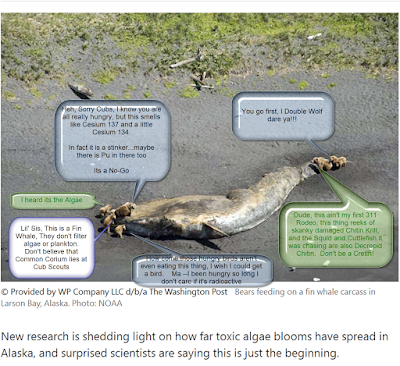 The little one says "I heard it's the Algae" and then the junior high one says...."Lil' Sis, This is a Fin
Whale, They don't filter algae or plankton.   Don't believe that Common Corium lies at Cub Scouts"

How blatant the lies have become.
The fin whale eats Krill, Squid, Cuttlefish, all the critters that bio-accumulate radiation and also that radiation destroys the Chitin structural organic parts of their bodies, and damages them as they form.

Only a Cretin believes that it is something other than the Chitin.

No hint of recent tests on THESE dead whales.   No test results back from NOAA from their UME in which they stated that further testing for radiation is being done and will be released when completed.    I asked them in January in writing, they did not respond.

Full size picture for you 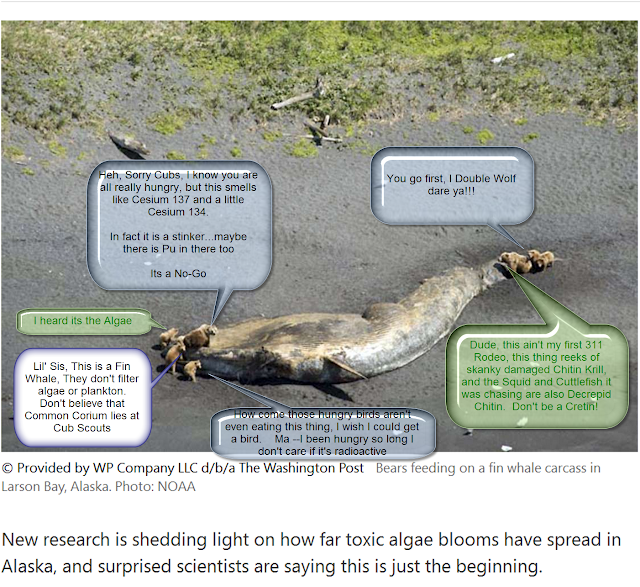 This is the article that promotes the study from NOAA.
http://www.nwfsc.noaa.gov/news/features/algal_blooms_in_arctic_waters/index.cfm

The study is dated February 2016 in bold letters at the top, so a skim reader would think the headlines would relate to very recent events.   It's a pimp job.   They can't admit the truth, or are just too dumb to see it.

The years in the study are 2004 to 2013 have been seeing low levels (but detectable) in all of 13 marine mammals species in Alaska from 2004 to 2013....but they pretend that just now, the algae issue is causing the deaths.   See the links at the bottom, all the backup material is presented

The Wildlife Algal-toxin Research and Response Network for the West Coast (WARRN-West) collected samples from more than 900 marine mammals that were harvested or found stranded in Alaska from 2004 to 2013. Testing at NOAA Fisheries’ Northwest Fisheries Science Center found algal toxins present in some animals from each of the 13 marine mammal species examined, and from all regions in Alaska. 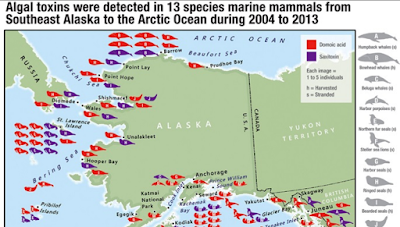 stock here---these animals are STARVING!   algal toxins may play a damaging part now, although it had minor effects prior to 2013.

This is the same propaganda type chart they played this summer for California mass die-offs.   Testing showed only 1 to 2% with domoic acid (toxic algae) as the cause of death.   Yet the cute graphic wants to pin all the Unusual Mortality Events UME, on algae, and then further put the blame on "Global warming".

Then the article states, as if a fact:


A massive toxic algal bloom, believed the largest ever recorded, reaped havoc in the Pacific in 2015. Stretching from southern California north to the Aleutian Islands and Bering Sea, it prompted the closure of recreational and commercial fisheries across the American and Canadian coastlines.
“It really does point out that there is a need for more monitoring,” Lefebvre said.

stock here---that says it all, the new age of science.    They want to "monitor".    They don't want to use intuition and original thought, they want to assure everyone....hey  we are "monitoring" as the ocean dies before our very eyes.

Here is the backup material, if you wish to run down the rabbit hole.

I recently made the discovery of an obvious cause of the mass die off in ocean, but also bees and butterflies, and why "the flies all go away" after a nuclear accident.

NOAA lying about the cause of sea life death in California, with a cute graphic.

Here I did the data mining of the Marine Mammal Center and their detailed survey of seal condition and causes of death.  I used pivot tables to extract the data in different ways and present it in tables and charts.    Easy to see, Algal causes, via Domoic Acid are only like 1 to 2% of the deaths.

BUT THEY PRETEND the Algae are causing ALL the deaths.

We are nearly too late, the mass die-offs are now hitting the Human Species