See the story below, it exposes an illegal clandenstine program of the USA supplying Japan with Plutonium for bombs.

And related to the next article, about high risk for the big quake in Japan, this week, is the fact that Japan has built it's infrastructure VERY STRONG.    I am an expert in materials and structures, and from traveling all over Japan I have come to the conclusion that Japan has built everything so strong, to not just minimize citizen death in a 9.5 earthquake, but to have enough systems still fully functional that even after a 9.5, that China could not send 500,000 "aid workers" which are actually military and take over their country.

That is how much they hate the thought of being subjects to the Chinese, and how much they rightfully distrust China.   And vice-versa.


I kinda sorta knew that USA was supplying plutonium to Japan.    And that Japan had a secret nuclear weapons program.   And why not do those programs at a nuke plant, since the radiation could be confounded with  that of the nuke plant, and you got

Japan and China fighting for thousands of years, plenty of war crimes on both sides.   USA wants Japan to have nuke bombs so any skirmish or full on war between Japan and China could be handled between the two of them.

A war between USA and China would probably be a world ending event, but a war between China and Japan would be devastating but not USA ending.

If China makes a serious threat against Japan or a capture of one of their small islands, or even starts drilling for oil or minerals too close to Japan, Japan can simply say....oh BTW, you know that 70 tons of plutonium we had, well now we have 300 nuclear bombs, so pull your oil rig out or we will nuke it.    Or give us our island back or we nuke Shanghai.

Of course this is the truth, what other truth could there be?
pretty high security already. 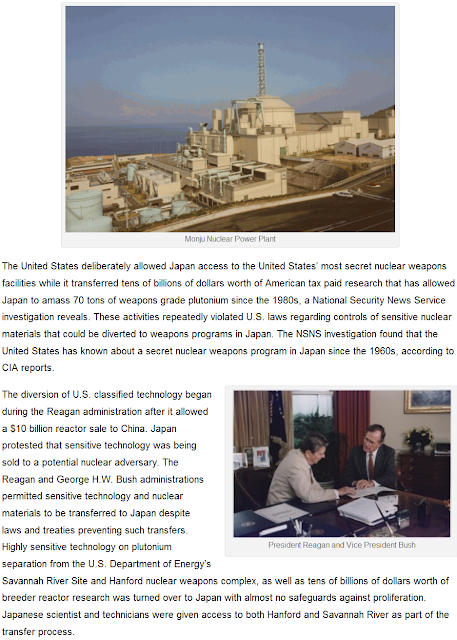 https://www.dcbureau.org/201204097128/national-security-news-service/united-states-circumvented-laws-to-help-japan-accumulate-tons-of-plutonium.html
Posted by Stock at 1:09 PM