Long Term Exposure to "Low Dose" Radiation is Far Worse a One Time Big Exposure, Especially if the Chronic Exposure is From Man Made Radiation

Doses delivered slowly and continuously over extended periods of time, such as from the ingestion or inhalation of fission-products, are hundreds of times as damaging as short, high-intensity exposures at the same small total dose produced by a brief X-ray. 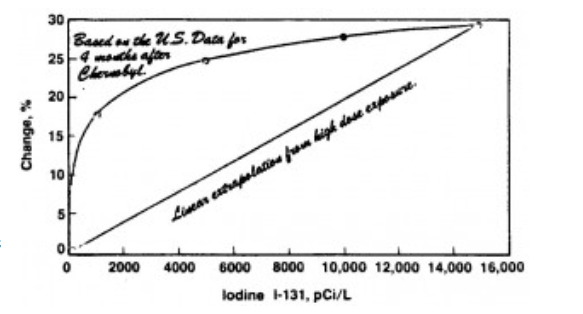 Furthermore, as reported in Red Balloon (Spring, 1988), widespread exposure to fallout can affect the immune defenses of the body and increase the mutation rate of micro-organisms. Thus, radioactive releases due to nuclear bomb tests and nuclear powerplant accidents (among other man-made factors) correlate directly with the worldwide epidemics of new diseases and disease complexes such as AIDS, and with a resurgence of older infectious diseases such as measles, hepatitis, tuberculosis, cholera and syphilis. [See Figure 6] The correlation is direct, and the lack of government and scientific concern over the evidence is astounding. Wherever heavy rainfall, diet and social disintegration combine to decimate immune systems and introduce radioactive materials — Strontium-90 being a leading culprit — into people’s bodies, modern plagues are being introduced in populations unable to ward them off.

In recent years, it has become clear that the damage to the immune defenses of the body also lowers its ability to fight cancer. Strontium-90 and other fission products similar to calcium contaminate milk, meat, and root vegetables that are the staples of most western diets. They concentrate in bones and damage the cells of the immune system originating in the bone marrow of newborns as well as adults.

Interestingly, a study by the March of Dimes (NY Times, Apr. 20, 1991), showed that in the mid-1980s, the infant mortality for the Asian population of New York City had plunged to an all-time low of five per 1,000 live births, as low or lower than reached in any other large city in the world — although the infant mortality rate remained about four times greater for the Black population.
The enormous discrepancy fits exactly the hypothesis that it is chiefly the milk, cheese and large amounts of high fat, high Strontium-90 beef that compose the diet of most people in the U.S., but which are not part of most Asians’ diets, that have been devastating the immune systems of the rest of the world’s population since the nuclear age began.

No socio-economic or medical care changes could explain the sudden large fluctuations in mortality over so short a time. Likewise, no other toxic agents such as DDT, PCB, dioxin or other herbicides, pesticides, industrial chemicals or seepages from toxic waste dumps could explain the sharp rises and declines in the U.S. Monthly Vital Statistics across the country as a whole. Only a short-lived toxic agent such as iodine-131 together with other short-lived isotopes could account for such rapid rises and declines of mortality. Indeed, it is the appearance of this short-lived radioactive agent that highly correlates with the sudden rises and declines of all three types of mortality reported for the different regions of the U.S.

Radioactive iodine-131 and other fission products damage key hormone-producing organs such as the thyroid, the pituitary and other glands involved in the control of vital functions such as growth, development, reproduction and immune resistance. As the evidence provided by the Chernobyl accident strongly suggests, low levels of fission products in the air, drinking water and the diet are likely to be the principal factors in the otherwise unexplained changes in mortality and fertility seen in the United States during the years of nuclear weapons testing following World War II.